. . .I stop to realize just how lucky I am. Please forgive a little indulgence here, and please forgive me (again) for going off the topic of this blog, but this Sunday, May 20, 2007, will mark one year since one of my lifelong dreams came true. I remember the day perfectly well. May 20 already had a special place in my heart, for it was on this day, way back in 2000, that I graduated from Kutztown University and received my bachelor's degree in History. But May 20, 2006, was even more memorable. . .
The story, however, begins a long time ago, when I was a kid, maybe five or six years old. That year--I guess it was 1983 or 1984--my family and I took a trip to Gettysburg, and from this visit, I was instantly fascinated with the American Civil War. It was immediate. Over the next several years, I outfitted myself in a costume, reenacted great battles behind my house, collected little plastic soldiers, set up vast dioramas, and waged massive engagements using either my finger to track the trajectories of the imaginary bullets or rubber bands. Casualties were severe. I also read constantly. I remember reading, over and over again, the classic "Golden Book" of the Civil War, and paging through Bruce Catton's many works, even if I couldn't really understand it all. I also remember getting the Gettysburg edition of the Time-Life Series on the Civil War, and receiving a new volume every two months. I believe the bindings of all these books, which I still have, are completely worn and broken from overuse. As I got a little older, my family would take me on trips to Gettysburg (we must have made this two-hour drive at least three times a year), Antietam, Manassas, Fredericksburg, Spotsylvania, Richmond, Petersburg, and even Appomattox. I still remember these vacations as if they took place just last year. I always came away from these trips thinking just how awesome it would be a Park Ranger at a Civil War Battlefield. I looked up to the rangers as the preservers of history, as the interpreters and great story tellers of the Civil War, and I remember well programs I heard at Guinea Station where Stonewall Jackson died, and at Chancellorsville (where, as a ten or eleven year old, I developed this instant crush on a red-headed ranger as she recounted the moments leading up to Jackson's mortal wounding), and at Gettysburg, where Ranger Troy Harmon led us on an incredible walk from Seminary Ridge, following in the footsteps of Richard Garnett's Brigade, as they made their way toward that little "copse of trees." Someday, I thought, I will be a Park Ranger at one of these battlefields. . .
I continued to study the Civil War as I got older, and my fascination with the Civil War only continued to grow. I was really easy to shop for...birthday and Christmas presents: books. After high school, I studied history at Kutztown University and, after receiving my bachelor's degree from this institution, I entered Lehigh University and earned a master's in 2003. Even as I studied at these schools, I wrote to many, many different battlefield parks. . .inquiring about jobs or internships, or anything. I must have become a real pain-in-the-neck. But no matter how many letters I wrote, I always got a response. When I got serious about job hunting, I submitted formal applications in response to interpretative openings anywhere in the park service, from Richmond to Antietam, and from Valley Forge to Hopewell Furnace. I literally applied for dozens of openings over the course of nearly a decade. Each time, I received that standard-size white envelope, with that very formal letter inside. . ."Thank you for your interest," it would always begin, "although we have found you qualified for the position. . ." well, you know the rest. I was naturally discouraged each time I got one of these letters, but I wasn't about to give up on my dream. I even kept all these letters (and the envelopes they arrived in) as a source of motivation and inspiration. (See photo below). One day, I kept telling myself, I will pull these letters out and remember what a struggle it was to get a ranger job. . . 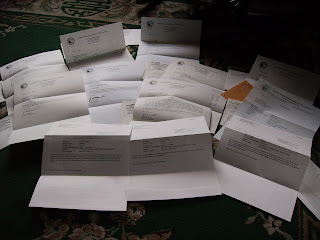 Piles of rejection letters. . .
While studying at Lehigh, I was given an adjunct teaching position at a local community college, and I discovered that I really enjoyed teaching. So, instead of pursuing a Ph.D., I decided to enroll at another university and complete an education program. By the next year, I obtained an Instructional I Certificate to teach Social Studies, 9-12, and Citizenship Education, 7-12, in Pennsylvania's public schools. I interviewed for teaching positions in the Lehigh Valley, but in October 2004, my wife and I decided to move to Gettysburg. I still longed for a job as a Park Ranger, and I headed to Gettysburg convinced that I will one-day get in. I continued to write letters (poor Scott Hartwig here in Gettysburg must have gotten half a dozen from me within a two-year period). And each time, I got a reply that further convinced me of the great difficulty in getting into the Park Service. I found work as a full-time, permanent, substitute for a local school district, and even spent a (very long) summer working at one of Gettysburg's reenactor's sutler shops. Shortly after arriving in Gettysburg, I discovered that the Antietam National Battlefield was looking for volunteers, so I put my application in, and in January 2005, I became a volunteer at this awesome park. I worked Saturdays mainly, and got to know the ranger staff very well. But still, things weren't looking good. During my first year in Gettysburg, I received more of those rejection letters, and by the beginning of May, 2006, my wife and I were seriously thinking about moving back to eastern PA. We even found a house that we loved...it was going up for sale at public auction on May 20, and we decided we would go and put in our bid. Yes, May 20.
Now, back in late February 2006 I was told at Antietam that with the retirement of Paul Chiles, there would be a few seasonal interpretative openings. I was encouraged by Christie Stanczak, Keith Snyder, and Alann Schmidt to apply. They each said they would put in a good word for me. So I did, but by this point, I was fully expecting that I would be moving back, and I was fully expecting that I would once again that get infamous letter in the mail. But, in the back of my head, I knew that this would be the best shot I ever had a ranger position.
I was up early as usual on Saturday, May 20, 2006. I brewed a pot of coffee, sat down at my computer to get some work done. We would be leaving around noon for the auction. It was sometime after 10:00 a.m. (10:23 a.m., I think it was) when a knock came at the door. I was reluctant to open it because I was still in my sleeping clothes and my hair was a wreck. But I did, and there stood the mail carrier. She had a Certified Letter, in an 8"x11" manilla envelope. I saw the return address while it was still in her hand: "United States Department of the Interior National Park Service." I could not believe it. I signed for it, but kept it closed for about another half an hour, and thought to myself..."Could this be it? Finally, after all these years?" I poured myself a fresh cup of coffee, and finally mustered up enough courage to open it. . .
"Congratulations," it began, "you have been selected for the position of Park Ranger (Interpretation), GS-0025-05/01, located at Antietam National Battlefield." (See photo below) I was just overcome with so many emotions, that I didn't know what to do. My wife was thrilled for me, of course, but there still the matter with that house. . .We went, and I just kept hoping it would go for a lot of money, more than what we could afford. I was nervous when there were few bidders...then the price went up. I grew more and more relieved, and when the price went way above our limit. . .well, a big sigh.
So, that was May 20, 2006. A day I will never, ever forget. With the one year anniversary of this date fast approaching, I am realizing again just how lucky I am. . . 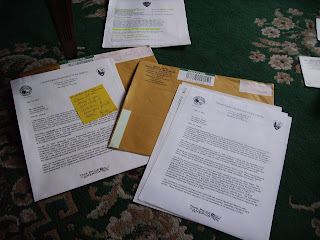 The Certified Letters with the good news:

A lifelong dream had come true. . .

Good on you, John, this is lump in the throat stuff. Congratulations and happy anniversary. Keep living the dream!

John - Just read your latest blog and want to tell you how proud we are and always will be that you are our son. So glad you found a great passion to fill your life and that you persevered through the obstacles and struggles to realize your dream. We miss taking you on those week-end battlefield excursions and hope someday you and your wife, Laura, will enjoy those same family trips with your children. Maybe Grandma and Grandpa can come along!
We still can't believe our son is now a park ranger, giving us the tour at Antietam - Who could have guessed it way back in 1983?
Love Always - Mom & Dad

PS - You forgot to mention all the skirmishes you had with your sister in the back seat of the Stanza and Van during these childhood trips to the battlefields! Love Mom

Skies of Blue and Gray said...

I was looking up Gettysburg information and came upon your blog, and I really liked this post. I got interested (read: obsessed) in Gettysburg when I first visited the (original) Visitor Center. Since then I've nurtured a great love for Civil War battlefields and consider it a very fulfilling obsession :-)