Antietam Book Completed, or, The Long and the Short of Writing. . .

So what in the world does Blaise Pascal, a seventeenth-century French mathematician, philosopher, and physicist, have to do with the American Civil War?
Well. . .
Nothing, actually. 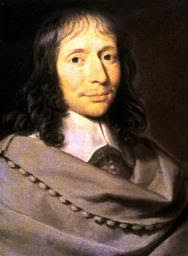 Blaise Pascal
However, I bring up Monsieur Pascal today because he coined one of my favorite quotes, which has everything to do with the theme of this post: writing.
At the end of a particularly long letter to a group of associates (I think it filled more than nine pages), Pascal, off-handedly, commented: "Pardon me, gentlemen, for the length of this letter. I did not have time to make it shorter."
As a writer, I could not agree more with this rather witty assessment. . .
* * * * * * * * * *
Now, to the issue of writing, and to the subject of the Civil War.
In December 2007, I was asked by the manager of the Antietam Museum Store to write a concise history of the Battle of Antietam and the Maryland Campaign of September 1862, which will be published, later this year, by the Western Maryland Interpretative Association.
Of course, I was both honored--greatly honored-- and thrilled at being asked. "What an incredible opportunity," I thought to myself.
I did have a number of guidelines to follow. First, the book is meant to be geared toward the general/interested public. . .those who visit the battlefield for the first (or second) time, and want a quick, easy-to-read, introduction to Antietam and why it is the battle should be remembered. Second, it has to be concise, with the finished product ranging between 60-70 pages. Third, the book is to be richly illustrated with photographs, maps, etc. Finally, I was to base the book on, and use roughly the same format as, the wildly popular National Park Civil War Series of books that each focus on a particular battle. . . Any frequent visitor to Civil War Battlefields know what books I am referring to, but just in case. . . 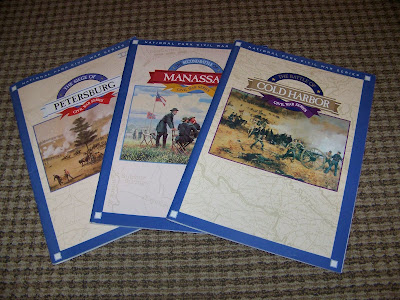 I immediately went to work. . .
and immediately discovered that this would be no walk in the park. Some might think, "wow, 60 pages. . .big deal. Anyone can write that!"
But that is precisely where the biggest difficulty lay: How can I take the vast historiography of the Maryland Campaign and the battle of Antietam, with all of its momentous consequences, and condense it into so short a space? And because of the maps and photographs, those 60 pages would equate into just 30 or so of text.
And keep in mind that I was to cover not just the battle itself, but the entire campaign, including Lee's motivations behind the invasion, the capture of Harper's Ferry, Special Orders No. 191, the battles of South Mountain and Shepherdstown, and the battle's aftermath, with, of course, a discussion of the Emancipation Proclamation.
My eagerness quickly gave way to some frustration as I found myself having to make tough choices in terms of what and what not to include, and the extent to which I covered crucial aspects of the campaign.
Pascal's quote never rang truer.
If I had no page count to keep in mind, I would have had no trouble, whatsoever. I would have just kept on writing, and writing, and writing. But, as it was, with one page of text turning into another, I grew concerned. There's no way, I oftentimes thought, I could cover so much in so little a space. I wore out the carpet in the office pacing back and forth, and grew jittery as one cup of coffee turned into two, or three, or four. I would stare blankly--and sometimes angrily-- at that blinking cursor on the page. . .it was taunting me. The second hand on the clock moved faster than ever. An hour (or two) would go by in a flash, and I had just one paragraph to show for it. I must have walked the streets of Gettysburg a thousand times over the past two months, for I thought a walk would clear my mind and give me an opportunity to think about the next sentence, the next paragraph, the next page. At least it was a healthy diversion. What I needed, as I continually reminded myself, was more time. Always more time. It was a justification, and one of the biggest reasons people give for not writing.
Then it dawned on me. . .all the time in the world was not going to write this book! The only way this book was going to get written was, well, to write it! I rolled up my sleeves, and returned to the office, with my pages and pages and pages of notes in one hand, and a cup of coffee in the other. I glared back at that blinking cursor and thought, all right, pal, bring it on.
And now. . .
I am all too happy to report. . .
It is finished.
Well, at least the text is finished. There is still the layout to do. And, of course, there is going to be some editing and corrections. But the hard part is over, at least I hope so. I hit the final keystrokes yesterday, and with much relief, sank back in the chair and smiled as I hit "Save."
There is still a lot of work (and waiting) to be done before the book is published, and I will certainly keep you updated as to its progress. Stay tuned.
'Till then, I think I will return to my other book projects. . .the longer, but infinitely easier ones.
Posted by John David Hoptak at 5:41 PM

After you hit "save", did you do a backup?

Congrats to you, John! Keep us posted on the publishing process, will you?

Congrats, John! Though I have yet to publish any research, I know that writing, even about subjects you are passionate about, can be a chore! I decided to create a blog to share some research I've done over the years and hope you don't mind that I added your blog as a link! I certainly enjoy your posts and look forward to them each week!

Brian and Jon-Erik~ Thanks. . .I will certainly keep you all updated.
Jon-Erik~ what is your blog's web address?

Didn't mean to steal your background format, but the rest seemed a bit 'flashy' for the subject matter..haha. It would certainly keep me posting blog entries if I knew you or others were reading on a 'semi' regular basis..take care!