Raising Monuments, Writing the Regimental History, & Trying To Break Even

I was pleasantly surprised this afternoon when, after sorting through the mail, I found a stuffed manilla envelope sent from my buddy Stu .

Inside were copies of newspaper clippings from the Miners' Journal, most of which related to the 48th Pennsylvania, and all of them are entirely fascinating. (I will be posting on these at a later date).

Also included was a copy of the 1909 "Survivors' Roster of the 48th Reg., Pa. Vet. Vols." I have several of these little publications, each about 4" x 3," but never have I seen the 1909 version. These little Survivors' Rosters number less than 20 pages but each contains what I consider to be priceless information. Published annually, each contained not only the names of those veterans of the 48th yet living, but their addresses as well. (Many of the soldiers moved far, far away from Schuylkill County in the post-war years; a good number of them even listed their residences in San Francisco). In addition, a brief introduction reports the number of veterans who passed away in between publications.
The 1909 Survivors' Roster was the tenth published since the veterans of the 48th formed their "Survivors' Association." The Association was formed in 1899, wrote President Daniel Nagle, "mainly to keep alive the feeling of Comradeship engendered by service with each other on the March, the Camp and the Battlefield, and like ancient Comrades, [to] meet once a year to tell of the brave deeds by our Regiment when we were doing our share in the Great War for the preservation of the Union."

As was noted in the introduction to the 1909 roster, 130 veterans of the 48th died during the ten years since the Survivors' Association was formed. The achievements of the Association were also noted in the booklet's introduction. These achievements were important to the members of the Association, said Nagle, "so that when the next few years will pass and we, too, [will] be with the Grand Army on the other side, we will leave to coming generations a united country with monuments and history to tell of deeds well done in that time that tried men's souls."

The first of these achievements was the placing of the regimental monument at the Antietam Battlefield (1904); the second was the raising of nearly $6,000.00 from "the generosity of the good people of Schuylkill County, the School Children, and a few of the large-hearted Comrades of our Regiment," for a second regimental monument, this one at Petersburg (1907). 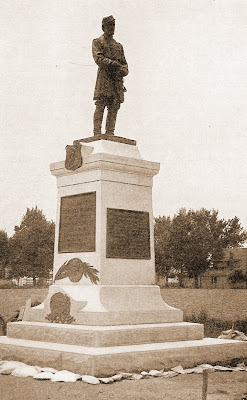 Finally, at the April 29, 1905 Association meeting, resolutions were passed that authorized Joseph Gould, a veteran of Company F, "to write the History of the 48th Regiment," with "one Comrade from each company to assist him in the work." (Gould's book, published in 1908 and titled The Story of the Forty-Eighth, was the "official" regimental history, but was actually the second to appear. Some 13 years earlier, in 1895, Oliver C. Bosbyshell took it upon himself to write his own "unauthorized" regimental). As was noted in the 1909 Survivors' Roster: "After much labor and at great expense Comrade Gould has given us a very complete History of our Regiment from its muster in until its muster out at the end of the Civil War."
Pleased though the Survivors' Association was at the completion of Gould's book, it apparently was not selling all too well.
Indeed, it seems as though Gould took a loss in the publishing and printing of this work. "It is sincerely hoped," wrote Nagle, "that as many of the Comrades as can afford to do so will purchase at least one copy of this book, as there are still a number unsold and the author has not as yet realized from its sale enough to cover the expense of printing."
Joseph Gould. . .I hope he was able to eventually break even, at least.

I suppose there is a lesson or two to be learned from this. . .100 years ago, with Civil War veterans still alive and very much active in commemorating and remembering their deeds on the fields of battle, regimental histories were a tough sell, even among the veterans of the regiment itself! (There is no record, however, on how well Bosbyshell's book did. . .perhaps many veterans of the 48th found the market already "flooded," if you will, and did not want to splurge on a "reinvention of the wheel").

John: Let your readers know both regimental histories have been reprinted by Ward House books- a division of Higginson books. The bindings are sturdy and reprints are well done. I have both and they are both excellant reading.Hope you will do a regimental also. James McCorry