Since I began this blog dedicated to the 48th Pennsylvania Volunteer Infantry in November 2006, I've written a good number of posts entitled "PROFILES," with each one focusing on the life of a particular soldier. Most of these Profiles pieces, however, have focused on the regiment's commissioned officers, and when I first launched this site I said that I wanted to focus on both the officers AND the enlisted men equally. Looking back through my Archives, it seems that I have paid more attention to those who wore the shoulder bars of colonel, major, captain, or lieutenant. Of course, because there is usually a great deal more information readily available on the officers, it has been easier for me to focus on them when doing a Profiles piece. But today, I randomly selected five soldiers who served in the 48th PA who did not advance into the ranks of the commissioned officers. Each one, however, does have a fascinating story to tell, and each one, of course, was equally as brave as the regiment's highest ranking officers.

* * * * * * * * * * Sergeant Daniel Donne, Company G
Donne enlisted in September 1861 into Company G, 48th PA. He stood 5'9" in height, had blue eyes and light hair. His occupation was listed as "Roller," and his hometown was Mechanicsburg, PA. Donne served throughout the four years of the war, advancing to the rank of sergeant, and was mustered out as a "Veteran" on July 17, 1865.

Corporal Alexander Govan, Company G
Alexander Govan, an engineer from Palo Alto, Pennsylvania, was just 18 years old when he enlisted as a private in Company G, 48th PA Volunteers. After surviving the battles of 2nd Bull Run, Antietam, Fredericksburg, the Wilderness, and Spotsylvania, Govan, who had been promoted to corporal, was killed in action at the battle of Cold Harbor on June 3, 1864.

Private David Griffiths, Company F
David Griffiths left his job as a coal miner in the summer of 1861 and enlisted as a private in Company F, 48th PA, a company recruited largely from the aptly-named coal mining community of Minersville. He was shot through the chest and severely wounded at the battle of Fredericksburg on December 13, 1862, but was able to return to the regiment. He was mustered out as a "Veteran" in July 1865.

Private Daniel Ohnmacht
When he enlisted as a private in February 1864, Daniel Ohnmacht was just eighteen years of age. He stood just over 5'2" in height, and was employed as a shoemaker who resided in Pottsville. He was mustered out of service in July 1865.

Sergeant Theodore Pletz, Company I
Twenty-four-year-old Theodore Pletz, a tailor from the small town of Middleport, was mustered in as a corporal in Company I, 48th PA in the summer of 1861. He was wounded and listed as Missing In Action at the 2nd Battle of Bull Run in August 1862. Pletz did find his way back to the regiment, and was mustered out as a "Veteran" in the summer of 1865.
* * * * * * * * * *
As I continue to update this blog every week or so, I hope to continue telling the story of the 48th Pennsylvania Veteran Volunteer Infantry one soldier, and one post at a time. . .
If anyone has photographs of soldiers who served in the 48th PA and would like to share, and perhaps see them featured in an upcoming "Profiles" piece, please send me a line. . .
johnhoptak@hotmail.com 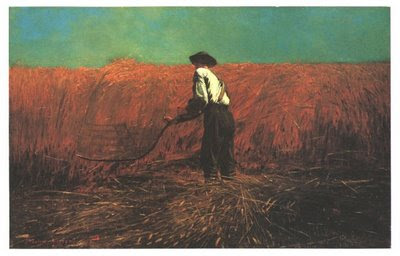 My colleague Mannie at http://www.volunteersinparks.blogspot.com/ has posted an excellent blog on Civil War art, and has inspired this particular post of mine. I do agree with Mannie's assessment that most modern day Civil War art: "All too often. . .seems overly influenced by stills captured of overweight and overwrought reenactors plying their hobby in painstakingly accurate uniforms under ideal lighting conditions." I would add also that there seems to be lot of paintings depicting Martin Sheen dressed as Robert E. Lee, or Steven Lang portraying Stonewall Jackson, and Jeff Daniels as Joshua L. Chamberlain.

I agree also with Mannie that the finest Civil War painting is Veteran in a New Field by Winslow Homer. Simply put: I love this painting. And seeing it on Mannie's blog has once again struck a chord with me. I've long wondered what it must have been like for these veterans to return to their homes after the guns fell silent. It seems that for all the tens of thousands of books written about the war, this aspect of it has remained relatively untouched. So, in the spirit of these soldiers returning home I decided to focus this post on the final days of the 48th Pennsylvania Infantry as recorded in the regimental histories.

The 48th Pennsylvania fought its final battle on April 2, 1865, at Petersburg, Virginia, but remained in the field until late July, when the regiment was officially mustered out of service. The veterans of the regiment did participate in the Grand Review through the streets of Washington on May 22, 1865, an event never-to-be-forgotten by the soldiers in the ranks. Joseph Gould recorded that "It was a noble spectacle, as, with the President and Cabinet and the foreign ministers around them, Gen. Grant and other noted generals looked down on these bronzed veterans who had moved at their bidding, and had been the instruments to execute their will, as the hosts of the Rebellion were pressed back, the Republic rescued from destruction." For two days this might army marched," wrote Gould. "Great and touching memories clustered around them, for they marked the final steps of the wondrous path they had trod for four years. Soldiers and officers had become endeared to each other by a common toil, a common danger, and a mutual triumph. They had never failed in the hour of peril. Manly men were they all, who had stood shoulder to shoulder on many hard-fought fields. Not one drooping banner had been disgraced--on the contrary they were covered all over with noble inscriptions, the mere mention of which was a history of gallant deeds. Although the air was tremulous with triumphant music and loud shouts, a sad, mournful feeling filled all hearts as the swiftly marching columns disappeared in the distance, for they were parting forever. But over all swelled emotions of joy, that the Union was saved--the country rescued from ruin, and a happy, united people would, ere long, forget the past, in the enjoyment of peace and prosperity. Gould then finished with an appropriate verse: "And so at last when the fighting was done/And the battle-scarred banners were furled,/The men who had lived by the sword and gun/Must find a new task in the world." 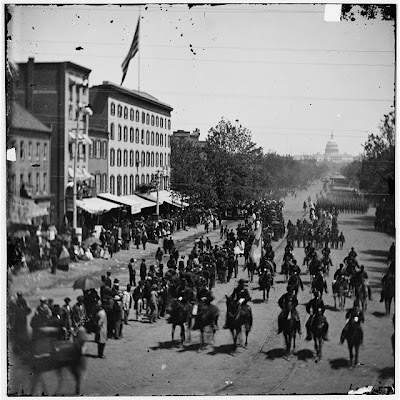 Organized in the summer months of 1861, the 48th Pennsylvania served for four years and throughout that time saw some of the war's heaviest fighting at such places as 2nd Bull Run, Antietam, Fredericksburg, the Wilderness, Spotsylvania, Cold Harbor, and Petersburg. An estimated 1,860 men served for a time in the ranks, and well over 300 of this number never returned home. On July 17, 1865, the 48th Pennsylvania ceased to exist as the surviving members of the regiment were officially mustered out of service. The men boarded train cars that same day and made their way to Harrisburg where they arrived on July 18. They remained here for four days, "the officers perfecting their final reports, and properly winding up the affairs of the regiment." At last, the soldiers once again boarded the train cars on July 22 and headed for their homes in Schuylkill County. Oliver C. Bosbyshell recorded the sentiments on the veterans while on their way back: "Oh how sweet the word to the brave fellows who had been spared through so many and great dangers! Home, blessed name, so soon to be realized! How the hearts of the men on that train throbbed as each mile carried them nearer and nearer to the sacred place! Many could have hugged the trainmen when 'Reading' was shouted into the cars! And then the welcome towns of Hamburg, Port Clinton, Auburn, and Schuylkill Haven flew by--and then every man on his feet ready to spring to the ground as Pottsville was reached, where great crowds roared, cheered and cried such a hearty welcome, all knew it was HOME!"

It must have seemed as if the entire county had turned out to welcome home the survivors of the 48th Pennsylvania. Grand receptions were held; music and a sea of American flags welcomed the 300 or so veterans of the 48th PA who arrived home that afternoon. Wrote Bosbyshell: "The meetings of the wives and children, with their husbands and fathers, were in many instances touching, in all joyful."

But as the celebrations came to a close, these men, these veterans of so many blood-stained fields, were forced to leave their soldiering days behind and try to return to some sense of normalcy. They were surrounded now not by their comrades in blue on some damp and dreary field, but by their families and loved ones in their warm homes. No reveille sounded early the next morning. No drilling, no Manual of Arms, no marches, no Guard Mounting lay ahead. No hardtack and salt pork for breakfast. No waiting now for the mail and the hopes of letters from loved ones. It must have been indescribable for these men to make the adjustment back to civilian life. And as the days, and in many instances, the hours passed with them now back at home, they all returned to their "New Fields," as Winslow Homer put it. Back to the coal mines, back to the clerk positions, and back to the farms. . .

This is why I love the Homer painting so much. It captures much more than just a man with a scythe.

Posted by John David Hoptak at 9:14 PM No comments: