I was reminded today of yet another reason why I love my job. . .
While doing my battlefield tours, and while I wait for the crowd to gather, I always try to make a little small talk. One of my tricks is to simply ask folks as they're arriving where they are traveling from, and whenever I hear Pennsylvania, I ask what parts, usually following this up by saying that I am originally from Schuylkill County. Today, again, I did this same routine while waiting for what was a rather large 70+ size crowd to gather at the Cornfield. Fast forward an hour and a half, and at the conclusion of the tour, a gentleman approached and asked: "Did I hear you say you were from Schuylkill County?" "Yes," I said. He then proceeded to tell me that his ancestors were from Schuylkill County, and that his Great-Great Grandfather fought in the Civil War. "Really?" I asked, "Do you what regiment?" And, of course, his reply: "48th Pennsylvania. Company I."
Now, I've been at Antietam for five years and this is only the third of fourth time this has happened. But what made today so much more remarkable was that the visitor actually had a photograph of his ancestor. Excitedly, yet still trying to maintain a degree of professionalism while in uniform, I eagerly asked to have a look. . .
Better than this, the visitor provided me with a copy. The original daguerreotype has been in his family's possession for the past 150 years and has never before been seen, except by the family.
Aside from the photograph being of not one, but two soldiers of Co. I, 48th, it is, without a doubt, one of the coolest Civil War photographs I have ever seen. Have a close look at how they modified their uniforms to give a unique look. The seated fella even has a pistol tucked under his belt, and is wearing an officer's buckle. The man standing, Sergeant Hugh Koch, made some kind of fancy lapels out of his sack coat. Even their sergeant's stripes are modified.
Have a close look. . . 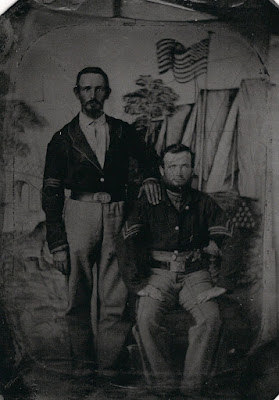 Sergeant Hugh Koch is standing. I have yet to identify the seated soldier, but I am investigating. Because of the 'veteran's stripe' on their trousers, I'm betting that this picture was taken in early 1864, after the regiment re-enlisted and went home on a thirty-day furlough.
Born on December 18, 1826, Hugh Koch enlisted in Company I, 48th PA, on August 15, 1861. He was 34 at the time of his enlistment, stood 5'6" in height, had a Light Complexion, Brown Hair, and Brown Eyes. He was, by occupation, a Butcher from Ringtown. Koch served throughout the four years of the war, re-enlisting in late 1863, and mustered out as a "Veteran" on July 17, 1865. He died on August 26, 1885, at the age of 59, and was buried in McKeansburg, just a few miles outside my home town of Orwigsburg.
The gentleman's willingness to share this photograph really made my day. It also has my wondering how many more of these photographs, still in family collections, are still out there. . .
Posted by John David Hoptak at 7:50 PM 2 comments: