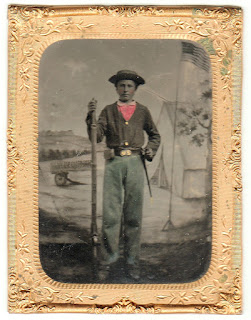 My thanks go out to Mr. Bert Crouthamel who, last week, sent me this great image of Private Cyrus Haines of the 48th Pennsylvania as well a scanned copy of Haines's obituary. As I have send many, many times before, it is always such a great thrill to be contacted by descendants of 48th PA soldiers and especially when they are so willing to share their photographs, stories, etc. This image of Haines, with the tinted pants, shirt and belt buckle, standing against the camp-scene backdrop is one of the best I have yet seen of a soldier who served in the 48th. His youth is readily apparent. The rifle Haines is holding remained in the family until a few years back when Mr. Crouthamel donated it to the Historical Society of Schuylkill County. So, when next in Pottsville, swing by the historical society and ask to see Haines's musket.

Cyrus Haines lied about his age. In the summer of 1861, Haines was not quite seventeen years of age, being born on October 14, 1844, in Minersville, PA, the son of Mr. & Mrs. William Haines, who were described as "pioneer residents of that town."  Cyrus's older brother Charles tried talking him out of volunteering but all to no avail; Cyrus threatened to run away if he did not secure the blessings of his family to fight. Not to be denied, Cyrus Haines, on August 19, 1861, enlisted in Company F, 48th Pennsylvania, a company recruited predominantly from Minersville under the direction of Captain Joseph Hoskings. When he signed up, Cyrus added a few years, claiming he was nineteen years of age, although he was just sixteen-and-a-half. His brother Charles, age twenty-three, also signed up to fight in Company F that August, 1861.

In height, Cyrus stood just 5'3" tall, had a "Dark" complexion, "Dark" hair, and "Dark" eyes. His occupation was listed as "Laborer." His brother Charles was a carpenter by trade.  Charles and Cyrus served alongside one another during the entirety of their three-year term of service. One can easily imagine the elder Haines keeping an eye on and looking out for his younger brother. Having emerged unscathed at 2nd Bull Run, Antietam, Fredericksburg, the Wilderness and Spotsylvania, Cyrus Haines fell wounded at Cold Harbor on June 4, 1864, shot in the left arm. He returned home to Minersville and, after a three-months' convalescence, returned to the army. . .but not to the 48th. Instead, Cyrus enlisted as a 'regular' in the 7th United States Infantry, and was discharged at war's end.

Returning to Schuylkill County, Haines moved from Minersville to Pottsville, which he made his home for the rest of his life. After following in the footsteps of his brother Charles by becoming a carpenter, Cyrus next found work as a "core maker" with the Pennsylvania and Reading shops in Pottsville, a position he held for thirty-five years. Cyrus's obituary stated that "while following his vocation as a carpenter," some fifty years before his death, he sustained an eye injury that caused a loss of vision to the eye. "About three years ago," his obituary continued, "the vision miraculously returned to the eye. However, its return caused the eventual loss of vision in the other eye and a general detrimental effect on his general health. Since this time he was a semi-invalid, although at times he was able to take short walks without assistance. Prior to this time he possessed a powerful physique that did not need or require the services of physicians or medicines. In addition to a strong body he possessed a strong and active mind. He was widely read and could always be depended upon for a sound opinion on current questions of local or national importance."

Cyrus Haines passed away at his home--152 West Railroad Street, Pottsville, PA--at 7:05 p.m. on May 27, 1937; his death "due to general debility and infirmities of old age." Haines was ninety-two years of age at the time of his death. Haines was one of the last surviving members of the 48th PA, and was among the last Civil War veterans in all of Schuylkill County. As his obituary stated: "The death of Comrade Haines came on the eve of Memorial Day when he and two other local surviving veterans of the War of '61 would be paid tribute as living representatives of the army of defenders who saved the country from being torn asunder in the dark days of 1861 to 1865. Haines's death decreased the number of Civil War veterans in Schuylkill County to four. They are: John J. Kohler and Henry Trough, [Pottsville]; Thomas Reed, Orwigsburg, and John H. Silliman, Tamaqua."

Haines did not want a full military funeral but a firing squad and bugler, composed of Spanish-American War veterans, did attend and "accorded their honors." Cyrus Haines was laid to rest in Pottsville's Odd Fellows Cemetery.
﻿
Posted by John David Hoptak at 6:24 AM No comments: