Soldiers of the 48th: Matthew and William Hume, Co. B, 48th Pennsylvania: Father and Son

Growing up in the coal town of St. Clair, in Schuylkill County, Pennsylvania, young William Hume listened, obeyed, and respected his father, Matthew, a hard-working coal miner. During the Civil War, however, father Matthew obeyed the orders of his son. William Hume, now a bright and promising young man of twenty employed at the outbreak of war as a clerk, volunteered his services on September 19, 1861, and was mustered into service as 1st Sergeant of Company B, 48th Pennsylvania Volunteer Infantry. Two days later, William's forty-four-year-old father, Matthew Hume, also volunteered, enlisting into the ranks as a private in the same company.  One can readily imagine that Matthew's decision to enlist was in part motivated in order to look out for the welfare and safety of his son.  One can also imagine the awkwardness that surely happened at times as now William had to now take orders from his son. . .


Serving side-by-side, Matthew and William Hume, survived the skirmishes in North Carolina and the battles in Virginia and Maryland in 1862. On September 20, 1862, just a few days following the bloodletting at Antietam, Hume was promoted to Second Lieutenant. Promotion to 1st Lieutenant, Company B, followed late in the summer of 1863, as the 48th campaigned in Kentucky and later east Tennessee.

Tragically, however, neither man would survive the war. Matthew Hume, the father, fell first. It was on May 6, 1864, in the tangled web of secondary growth in Virginia known simply as the Wilderness. Heavily engaged that day, Company B suffered a number of casualties. And the heartache must have been pronounced when Lt. Hume discovered that his father was killed. Just a few weeks later, Lieutenant Hume fell to a sharpshooter's bullet. It happened on May 31, 1864, as the regiment crossed the North Anna River, and made their way across the Armstrong Farm, as the army closed in on a crossroads called Cold Harbor. That day, three of the 48th's best officers were gunned down by Confederate sharpshooters. Lt. Samuel Laubenstein of Schuylkill Haven was struck, mortally wounded, as was the beloved Major Joseph Gilmour. Lt. William Hume was struck in the arm and the wound did not, at first, appear dangerous. However, as regimental historian Oliver Bosbyshell recorded, "the trying work of the campaign had so reduced his system that he failed to recover from the shock of the wound," and young Lieutenant William Hume died one month later, on June 30, 1864, in Georgetown's Seminary Hospital. His remains were sent back home to his grieving mother in Schuylkill County and were laid to rest in the Odd Fellows' Cemetery in Pottsville. Matthew Hume, Lieutenant Hume's father, was buried where he fell in the thick Virginia Wilderness, though his remains were later removed and interred in the Fredericksburg National Cemetery.  In reporting on the deaths of both Matthew and William, the Miners' Journal recorded that "the blow upon the widow of the elder Hume who is left with five young children is peculiarly severe."

Posted by John David Hoptak at 4:56 PM No comments:

Confrontation at Gettysburg. . .Coming Soon To A Bookstore Near You

Well. . .
Where to start?
It has most certainly been a long, long time (several months) since I last updated the blog.  Quite simply, life has been incredibly busy. Between work and teaching, traveling for presentations, and finishing up a book project, I found myself simply not finding the time for any new posts. And for this I am sorry. Time seems to have been on fast forward since the start of this summer, a trend that has continued apace well into the fall.  Since my last posting, way back in August, I returned to Antietam following a ninety-day stint at Gettysburg National Military Park and in September I had the distinct privilege of participating in the Sesquicentennial Commemoration of the Battle of Antietam, presenting a number of programs, including some In Depth Hikes, the Morning in the Cornfield, and the All-Day Hike on September 17, which, collectively, represented the greatest moment of my years as a Park Ranger. It was truly an experience I will never forget, a sentiment shared by most of my colleagues in the green and gray at , and something I will no doubt share, many times over with my children and hopefully grandchildren one day.
During this same time, I devoted all my non-work time to finishing up my history of the Campaign and Battle of Gettysburg for the History Press’ Civil War Sesquicentennial Series. Just a few days after the release of my book in February 2011, Doug Bostick, the managing editor for the Sesquicentennial Series, asked whether I would be interested in penning the series' title. It was a difficult decision to do so since the literature is so vast and because the story of this battle is so shrouded in legend, myth, and controversy. But after much thought, I ultimately decided to do so, believing it an opportunity I could not pass up but, even so, not quite realizing at the time just how very difficult it would be to condense the story of so important a battle and so consequential a campaign into a short narrative. But after many sleepless nights, burning the midnight oil over and over again, after many revisions, and after much editing, I am relieved to say that the book is finally finished and that it will “hit the shelves” in a little over a week, scheduled for release on Tuesday, November 20, 2012. 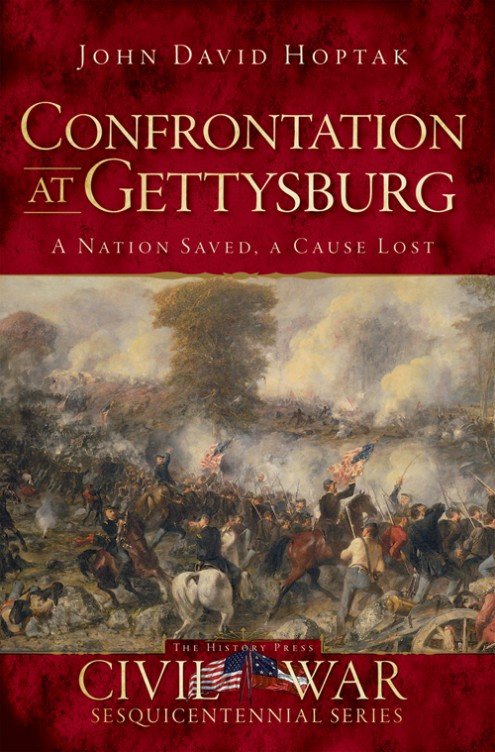 The book's cover illustration is a Rothermel painting depicting the charge of the Pennsylvania Reserves through the Plum Run Valley on July 2, 1863.
As is stated in the book’s introduction, I set out on this project not attempting to pave new ground, nor to mine any new, undiscovered sources. From the start, I approached this more as a storyteller than a historian. Students of the battle will find nothing new here, for the intended audience all along was not those who already possess an understanding of the battle but those who are seeking a concise narrative; those who are seeking, perhaps for the first time, a general understanding of why the battle was fought, how it unfolded, and what happened as a result. My sources were by and large secondary, with the works of Coddington, Sears, Trudeau, Woodworth, Symonds, and especially Pfanz serving as my guides and providing the framework. Confrontation at Gettysburg is a short work, coming in at around 250 pages of text, with nearly 100 images and illustrations (including a number of incredible hand-drawn maps by my good friend Mannie Gentile, which will knock your socks off, supplemented by maps by Hal Jespersen), with a total of just over 90,000 words. . . retailing for $16.99.  As with all things Gettysburg, the criticisms will surely come; for not focusing enough on the cavalry actions, for example, or perhaps my handling of Lee, Meade, Chamberlain and a host of others. But this, of course, is to be expected. My intention from day one was to write a clear and concise narrative of the campaign, a synthesis, with the hope being that I could both inspire further study and repay the faith placed in me by Doug Bostick and everyone at the History Press.
For more information, including on how you could reserve a copy, please click here.
Posted by John David Hoptak at 5:00 PM 1 comment: