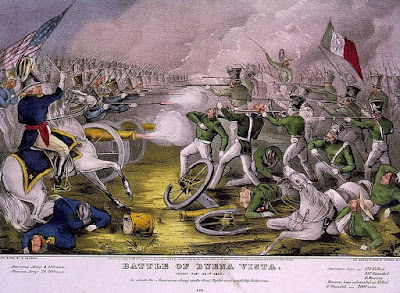 The Battle of Buena Vista (Library of Congress)
* * * * * * * * * * * * * * * * * *
have long been fascinated with this somewhat overlooked war and several years back, I began compiling a list of all those Mexican American War volunteers who went on to become generals in the American Civil War, fourteen or so years later. These men were not the West Point-trained U.S. Regulars (such as Lee, McClellan, Bragg, and so on); rather, the following are those who fought as volunteers in Mexico and then later earned their stars in the nation's fratricidal conflict.
Preceding the list of these officers, are some introductory words. I once thought of turning this into an article but that never went anywhere. . .
* * * * * * * * * * * * * * * * * * * * * * * * 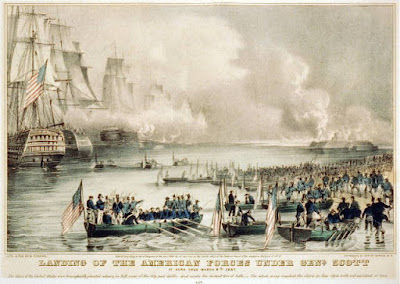 U.S. Forces Under Winfield Scott Land at Vera Cruz
* * * * * * * * * * * * * * * * * * * * * * * * *
The Mexican-American War has often been referred to as a training ground for a host of young army officers who would go on to rank among the Civil War’s highest-ranking commanders. From the battles of Monterrey and Palo Alto to the capture of Mexico City, these young men received first-hand experience in the school of soldiering and learned key lessons in the art of war by the likes of Generals Zachary Taylor and Winfield Scott. Tales of daring exploits and of remarkable bravery exhibited by these young officers who would later gain much fame during America’s fratricidal conflict are legion and known well to most serious students of the Civil War. Familiar is the story of twenty-four-year-old Captain Ulysses S. Grant who, although serving as the regimental quartermaster of the 4th U.S. Infantry, repeatedly rode to the front, seeing action at Resaca de la Palma, Palo Alto, and Monterrey, where he put his renowned horsemanship to good use by riding unscathed through a hail of bullets. Famous, too, is the story of Captain Robert E. Lee who, along with fellow engineer Lt. Pierre G.T. Beauregard, conducted a bold reconnaissance of Santa Anna’s left flank at Cerro Gordo and narrowly avoided detection and probable capture. We hear also of twenty-year-old Lieutenant George Brinton McClellan, another of Winfield Scott’s engineers, who had two horses shot from beneath him while scouting Mexican positions near Contreras and who was twice brevetted for gallantry. At the battle of La Hoya, we discover a young artillerist by the name of Thomas Jonathan Jackson who deployed his guns with great effect and stood steadfast, like a stonewall, amid a storm of shot and shell. Lieutenant Napoleon Jackson Tecumseh Dana was severely wounded and left for dead on the heights of Cerro Gordo, while, not too far from where he fell, Lieutenant Colonel Joseph Eggleston Johnston of the Voltigeurs, was also dangerously wounded. It was also at this same battle where Major Edwin Vose Sumner of the 2nd Dragoons was struck squarely in the forehead by a bullet, which, allegedly, simply bounced off earning him the sobriquet, “Old Bullhead.” While these officers survived their Cerro Gordo wounds, Lieutenant Thomas Ewell did not. He died hours after the fight with his brother Richard by his side. And finally, there is the oft-told tale of Lieutenant James Longstreet of the 8th U.S. Infantry who fell with a thigh wound while carrying the American flag in an attack against the walls of Chapultepac. Grabbing the flag from the wounded Longstreet, of course, was another young lieutenant who had graduated last in his West Point Class the previous year, George Edward Pickett. These and other such stories are seemingly endless and can truly fill volumes.

In addition to going on to earning great laurels or garnering much notoriety in the American Civil War, all of these men had another thing in common: they were all graduates of the United States Military Academy and were, thus, all regular army officers. Yet, of the nearly 100,000 men who served in Mexico, only about twenty-five to thirty percent—some 25,000-30,000 soldiers—were Regulars. The rest were volunteers.

Volunteer units hailed from twenty-four of the nation’s twenty-eight states as well as from the District of Columbia; Iowa and California, which at the outbreak of hostilities had yet to achieve statehood, also furnished troops. In all, between 70,000 and 75,000 volunteers, comprising the ranks of 76 regiments and several additional companies, enlisted during the war. Thousands of these men would later serve in both the blue and the gray during the Civil War. And because of their former military experiences in Mexico, most would enter America’s sectional conflict as commissioned officers primarily at the regimental level, being mustered in as lieutenants, majors, or colonels, and subsequently rising through the ranks. Take, for example, C. Roberdeau Wheat. Before organizing the famed Louisiana Tigers in 1861 and falling dead while leading his regiment at the battle of Gaines’s Mill in June 1862, the 6’4” Wheat served as captain of the Tennessee Company of Mounted Volunteers in Mexico. His is just one of countless examples of volunteer officers who served in both the Mexican and Civil Wars.

Of the thousands of Mexican-American War volunteers who would later serve in the Civil War, more than sixty would become general officers during the latter conflict. This number does not include West Point graduates who served in volunteer organizations in Mexico and as generals in the Civil War, men such as Jubal Early, Henry Naglee, Samuel R. Curtis, Lloyd Tilghman, Goode Bryan, and Humphrey Marshall. Instead, the Mexican War volunteers who later became Civil War generals, for the most part, lacked a formal military education, but exhibited an avid interest in martial endeavors and were typically members of a local militia company. And they were those who willingly left their civilian lives behind twice to serve in uniform. 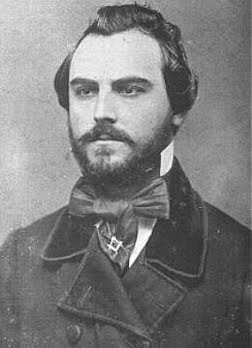 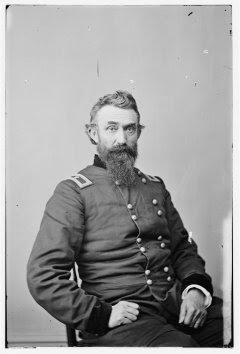 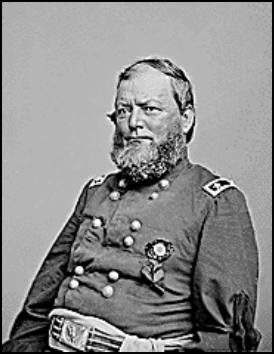 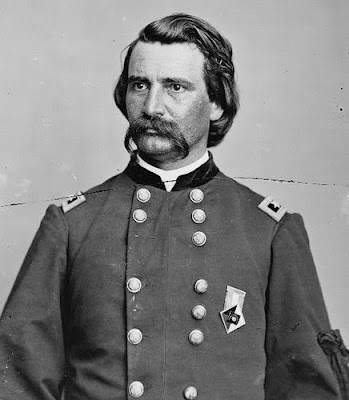 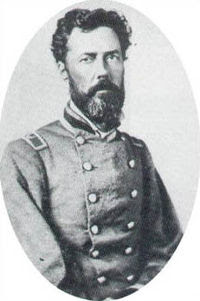 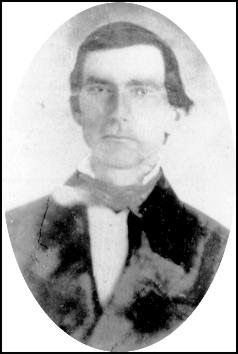 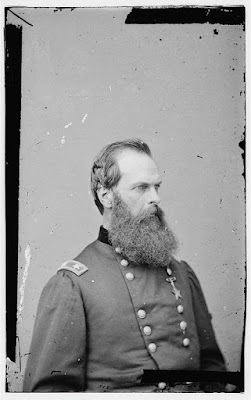 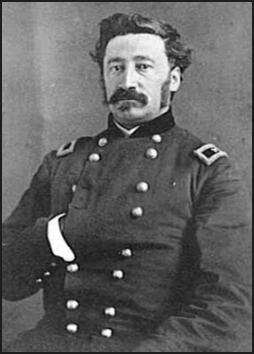 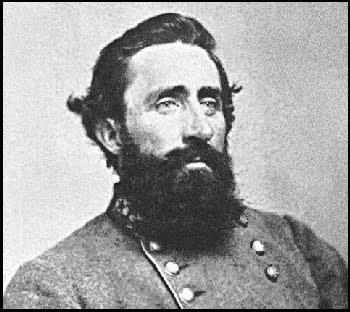 
* * * * * * * * * * * * * * * * * * * *
It is evident, then, that the Mexican-American War was training ground not just for the West Pont-trained, career army men who would later reach highest echelon of command in the Civil War. It was also a training ground for the thousands of citizens-turned-soldiers who twice volunteered their services, first in 1846-47 and again in 1861, either as commissioned officers at the regimental level or as general officers.
Posted by John David Hoptak at 5:07 AM 2 comments: 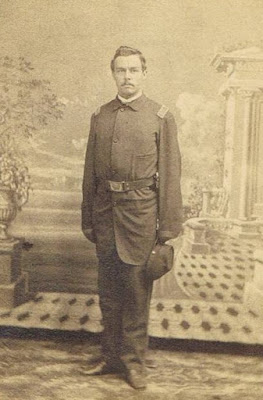 It has been quite some time since I last posted a Profiles piece on a 48th Pennsylvania soldier, so today I thought I'd focus in on Jacob Wagner, who served creditably throughout the entirety of the war, rising through the regimental ranks.
Jacob F. Wagner was twenty-one years of age when, in September 1861, he was mustered into service as a private in Company H, 48th Pennsylvania. He stood 5'6 1/2" in height, had a dark complexion, dark eyes, and black hair. His occupation was listed as painter and his residence was Pottsville, home to most of the men in Company H. Only two and a half weeks later, however, Wagner was named as the regiment's Quartermaster Sergeant, a position he held until December 1862, when he was promoted once more, this time to lieutenant and given then position of full Quartermaster.
The regimental history of the 48th penned by Oliver Bosbyshell refers many times to Wagner and his great efforts in keeping the soldiers well fed and comforted. One such example was on the night of September 17, 1862, when near the Burnside Bridge, the famished soldiers of the 48th were greatly relieved to see Wagner "with a fine lot of boiled beef and fresh coffee, which he had prepared by the cooks. . . .What a relish that midnight repast had!" Other references to Wagner in Bosbyshell's work hint that the quartermaster was much respected by the soldiers and throughout the war always performed his important duties with credit.
Jacob Wagner served as the 48th's Quartermaster throughout most of the conflict, but on June 21, 1865, was promoted one final time, to major. He held this rank for less than one month, being mustered out of volunteer service with the regiment on July 17, 1865 and holding the distinguished title of "Veteran." Yet Wagner's time in uniform was not finished. Apparently taking a liking to military life, Wagner returned not to Pottsville and his pre-war vocation as painter, but instead entered the U.S. Army as a First Lieutenant in the 29th Infantry. In July 1867, he was serving at Norfolk where he held the triple duties of Post Adjutant, Acting Assistant Quartermaster, and Assistant Comissary of Subsistence.
Posted by John David Hoptak at 12:42 PM No comments: