Having studied the 48th Pennsylvania for well more than two decades, just yesterday I stumbled upon an interesting account about some of the youngest soldiers in the regiment, one that I had never before seen. It's an article that appeared in the Mount Carmel Item on May 21, 1918, entitled "Youths In Our Great Civil War," and written by Joseph Gould, designated historian of the 48th Pennsylvania Infantry.

Gould was born in April 1840 and served in the 48th Pennsylvania throughout the duration of the war--from 1861-1865--first as a sergeant in Company F, and later as the regiment's Quartermaster Sergeant. Active in Veterans' affairs, Gould was tasked with compiling the regimental history of the 48th, which he published in 1908. Ten years later, with the world in the throes of the Great War, Gould, now age 78, was still active in preserving the memory of the 48th. He was one of only 65 veterans of the regiment to attend the annual reunion held in September that year; sadly, just one month later, on October 8, 1918, he died at his home in Mount Carmel.

In May 1918 Gould authored the following account, written, it would appear, in response to the backlash he saw printed in newspapers regarding Germany's recent decision to call upon young men to fill its depleted ranks during that final year of the Great War. Gould cautioned readers not to underestimate the fighting grit of young men and used the occasion to remember, fondly, some of the youngest soldiers who had served alongside him in the 48th Pennsylvania Infantry in this heartfelt and touching piece written some 57 years after the start of America's Civil War. 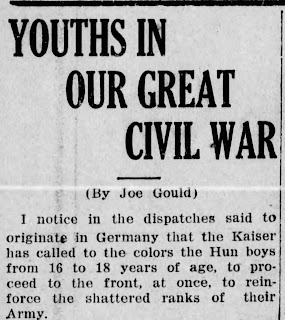 "I notice in the dispatches said to originate in Germany that the Kaiser has called to the colors the Hun boys from 16 to 18 years of age, to proceed to the front, at once, to reinforce the shattered ranks of their army.
The American newspapers, many of them, speak very sneeringly of this addition to the reserve of the German Army, and say that the extreme youthfulness and stature of these children will be of very little actual help in opposition to the Allied armies.
Well, perhaps this will prove to be the case, and I am sure, I give a hearty amen to the prophesy, but if these Hun children make as good all around soldiers in their cause, as the American children, of the same age and stature did in the Civil War, you may depend on it, that there will be trouble for the Allies.
My observation and experience during four years of hard campaigning in a fighting regiment whose record is unsurpassed, from Bull Run to Appomattox, leads me to say that the boys from 16 to 18, short of stature and light weight, from '61 to '65 carried the heaviest knapsacks, endured the greatest hardships, marched the most miles, did less straggling, had less attention from the surgeons, did less grumbling, and fault-finding than their older and bigger comrades. It was a rare occurrence to see one of these little fellows, classed amongst the 'coffee coolers' along the road side on a long march. They were in the ranks, and perhaps carrying their own gun and the gun of some footsore, overgrown comrade. The little fellow's dog tent was always the first in place, and he would be out prospecting for a top rail, a handy spring, hen coop, smoke house or tobacco barn.
On the march from Falmouth to Washington, D.C., a distance of 200 miles via Culpepper, in 1862, fighting at Whitteyville, Kelly's Ford, Sulphur Springs, Warrenton, Manassas Junction, Bull Run and Chantilly, a period of 25 days through broiling sun, frequent rain storms, accompanied with deafening thunder and vivid lightning, these kids plodded along, in line of battle almost every day, unfaltering, unafraid, enthusiastic and determined.
To the crossing of the Rapidan river on the 5th of May, 1864, through the Wilderness, Spotsylvania Court House, North Anna Crossing, Armstrong's Farm, Shady Grove, Cold Harbor to Petersburg on the 16th of June, fighting every foot of the way, under General Grant, whose strategy deceived and defeated the Confederate General Lee, who for 3 days had lost Grant's army and when informed by the Confederate Generals Longstreet and Alexander, that Grant's army had crossed the James River on a pontoon bridge composed of 104 boats at a point where the river was 90 feet in depth and where the rise and fall of the tide was 4 feet with swift currents, he would not believe it. These boys I speak of, were in it all, and gloried in it, and looked for more, cheerful and obedient, brave and unflinching.
I recall many of the dear little fellows, and it makes me happy to recall and record their names and brave deeds.
Cyrus Haines, of Co. F, 17 years, was wounded severely at Shady Grove and if there ever was a better soldier, "Si" Haines, in the language of Mike Kehoe, "he was a tundering good one." At this writing he is alive, and working every day in the Coal and Iron Shops in Pottsville.

Horace Straub also of F Co., not more than 16, a beautiful girlfaced chap, killed at Petersburg, Va. He had a presentiment he would not survive the coming engagement, and Captain Hoskings offered him a special detail in order to keep him out of the thick of the fight, but he declined and gave up his young life.

Mick Wilson, of F. Co., 16 years, died at Annapolis, Md., of nostalgia (home sicknesses), a very sad case.
Harry McCann, 16 years, F. Co., killed at Pamunkey River and Andy Wessner, 16 years, of F Co., killed at Spottsylvania C.H. These little fellows and many more, showed the grit and red blood of the American boy, and don't make a mistake by underestimating the valor and stamina of other boys."

There were many others, too, that slipped Gould's mind; others such as


Of course, legally one had to be at least eighteen years of age in order to fight in the Civil War but as these, and so many, many other examples make clear, there were many boys ages 15-17 and maybe even younger who also served, those who either lied about their age or got their parents' permission in order to fight for the United States in the moment of its greatest peril.

Posted by John David Hoptak at 5:55 AM No comments: