"May God Forbid Any Of You Or Yours Should Ever Have To Endure, Or Do As These, My Old Comrades Done:" A Message From a Civil War Veteran 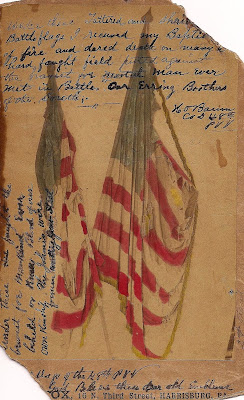 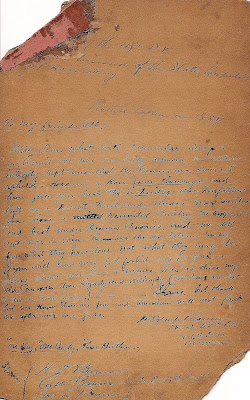 Sometime in the late 1880s, Civil War veteran H. Orlando Baum, still a young man now in his early forties, purchased a large-sized cabinet card featuring a photograph of crossed American flags, torn and tattered.  These were the flags that Baum's regiment--the 48th Pennsylvania--had once carried into battle; the flags under which he and his two older brothers served. And of these flags and of his service, Baum was justly proud.

Some two-and-a-half decades or so earlier--on February 26, 1864--Orlando Baum had lied about his age.  He told an army recruiter that he was eighteen years old when, in fact, he was still five months shy of his seventeenth birthday. His older brother Charles was there with him that day and had signed up, too.  The two Baums had become soldiers; having taken the Oath they were mustered into service as privates in Company D of the hard-fighting, seasoned 48th Pennsylvania Volunteer Infantry. They were not the only Baums in the company; a third brother--twenty-one-year-old James Baum had enlisted two days prior to Charles and Orlando. The Baums were native of Berks County, likely growing up and residing near Hamburg, a small town that sits right on the edge of neighboring Schuylkill County, from where most of the soldiers of the 48th hailed. There were several men from Hamburg within the ranks of Company D.

H. Orlando Baum (the "H" standing for Horatio) was described as having a Light Complexion, Blue Eyes, and Brown Hair. He stood just 5'3" in height. He told the mustering officer that he was a Confectioner by occupation, while brothers Charles and James were both listed as Moulders. Having signed on, the Brothers Baum would have made their way to Pottsville, where they were likely uniformed and equipped. From there, in mid-March 1864, the three Baums set off for war.

The 48th Pennsylvania was by then a veteran unit, having been originally organized in 1861 and having campaigned throughout the South--from North Carolina to Virginia, into Maryland, back to Virginia, then out West to Kentucky and Tennessee. It experienced combat at 2nd Bull Run, South Mountain, Antietam, Fredericksburg, and at Knoxville. When it was first formed during those heady summer days of 1861, it totaled more than 1,000 men. Now only about 350 remained. In late January 1864, those members of the regiment who decided to re-enlist for another "three-year or the war" term were granted a thirty-day furlough. They returned to their homes in Schuylkill County while the regiment's officers worked hard to gather new recruits. Appeals were printed in newspapers; recruiting offices once again opened. Despite the hell the war had become, there were still many young men eager to serve. Hundreds signed on, many who were much too young to enlist back in '61 but who now were of age--or nearly of age--like Orlando Baum. When the regiment returned once more to the seat of war--rendezvousing with the rest of the Ninth Army Corps in Annapolis, Maryland, it numbered more than 800 men strong, with more recruits arriving daily.

If the Baum Brothers had set off hoping to see combat, they did not have long to wait. With the onset of Spring and with the arrival of Ulysses Grant as general-in-chief of all Union armies--and with the presidential election just six months away--the Army of the Potomac set off to crush Robert E. Lee and his vaunted Army of Northern Virginia. The blue-clad soldiers crossed the Rapidan in northern Virginia in early May--and what ensued was two months of the most hellish combat. Even the veteran soldiers of the 48th Pennsylvania--those who had fought at and survived 2nd Bull Run and Antietam and Fredericksburg--had never experienced anything like it. In the Wilderness, at Spotsylvania, at the North Anna, at Cold Harbor, and at Petersburg, the fighting was seemingly endless--day-after-day, week-after-week, every day, it seemed, there was a battle. The 48th suffered heavily. From early May until the end of June--from when the regiment first crossed the Rapidan to when they started mining under the Confederate lines outside of Petersburg--the regiment lost more than 300 men, just to battle alone. Somehow, though, the Baum Boys emerged safely from these brutal and bloody campaigns.

James (who by war's end has been promoted to corporal), Charles, and Orlando Baum served with the 48th during the war's final fourteen months, and all three were honorably discharged from service when the regiment was formally disbanded on July 17, 1865. Their lives were still just getting started. James by now was twenty-two, Charles, nineteen, and Orlando, well, he was still two months shy of eighteen.

When the 48th Pennsylvania disbanded, their flags were turned over to state authorities in Harrisburg, including the tatters that once were the regiment's first flags, presented to the regiment when it first marched to war in '61. There was little left of them. And so, when the regiment once again departed, this time with the Baum Brothers in its ranks, it was presented with new flags to be carried  wherever the fates of war may find them.  Now, with the war concluded, those flags, too, were turned over to the State.  In 1887, they were photographed. Cabinet Cards were produced and many of the regiment's veterans purchased them, as a keepsake of their time in the service.

Sadly, none of the three Baum Brothers lived long lives.  The oldest brother, James, was the first to answer that final reveille, passing away on May 12, 1901, at age 58. Charles passed next. He was at work in a paint shop in Reading, late in March 1905. He seemed to have been in perfect health until, at 3:00 p.m., he collapsed. Efforts were made to resuscitate but nothing could be done. He died from "paralysis of the heart;" he was fifty-six years old. Horatio Orlando Baum outlived his brothers by more than a decade. His life ended on September 3, 1916, at age 68.

At some point--whether it was right after he purchased it, or perhaps some time down the road, after the deaths of his brothers, perhaps--Orlando Baum wrote some thoughts down onto that Cabinet Card of the 48th Pennsylvania's flags.  He wrote them not for himself, it would appear, but for posterity; for his family. . .and for us.

They were words he wanted us to know; and to remember. Thoughts on his wartime service, and the service of all the men in blue. What was gained; what was lost. He asked us also to never forget the sacrifices made in the effort to secure for us the hope and promise of the United States of America. That he was proud of what he did, there can be no doubt.

His words remain for all of us to read; one Civil War veteran's thoughts on the war--what it meant; what it still means:

Transcription:
Top:
"Under these tattered and shriv. .  .
Battle flags I received my Baptism of first and dared death on many a hard fought field
pitted against the bravest foe mortal man ever met in Battle, "Our Erring Brothers" of the South
H.O. Baum
Co. D 48th PVV

Side:
Under these fought the bravest foe mankind ever beheld or knew. Blood of our own kinship. The Johnies were [illegible] worthy your steel.

[Back of Cabinet Card]

Transcription:
Flags of the 48th P.V.
. . .in possession of the State Capitol at Harrisburg

To My Friends All--
May come what will remember always to our credit we done our duty, defended the Nation's integrity, kept unsullied the banner we swore to uphold, rescued a Race from Bondage, and have given you back the inheritage [inheritance] Our Forefathers left us as a sacret [sacred] trust and under God's will you have a reunited Country, the happiest and best under Heaven's [illegible], and we did not war in vain. Remember the old Veterans kindly for what they have done, not what they may be, if you will, and may God forbid any of you or yours should ever have to endure, or do as these, my old Comrades done, Loyally and Willingly. (Yet some are left to die in Almshouses.)----Shame, but thank God we hope there are few and Americans will not forget us after we are gone.

"One Flag, One County, Three Brothers"

Posted by John David Hoptak at 6:44 AM No comments: 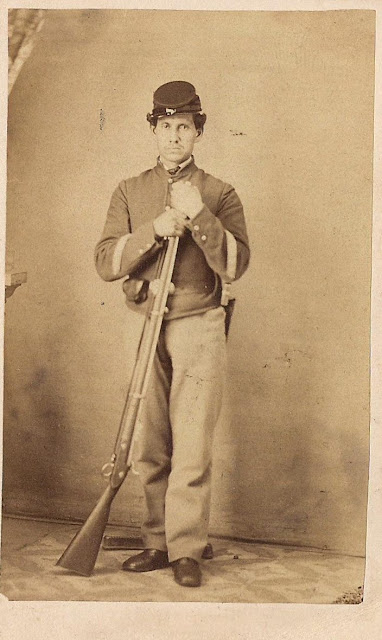 Elias Britton survived two battle wounds as well as a wartime illness, only to die in a work-related accident in 1892.

Britton served throughout all four years of the Civil War. Mustered into service as a Private in Company A, 48th Pennsylvania Infantry, on September 17, 1861, Britton served with the regiment in all its many campaigns and battles, seeing action in North Carolina, Virginia, and Tennessee. His age was listed as 25 years old at the time of his enlistment, however, his grave marker states that he was born in October 1832, which would have made him 29 in 1861. He stood 5'6" in height and was described as having dark eyes, dark hair, and a dark complexion. He provided his occupation as miller, and his residence as Auburn, in Schuylkill County, PA. The regimental records list Britton among the wounded at both the Battle of 2nd Bull Run (8/29/1862), and at the Battle of Petersburg (6/17/1864). Surviving these injuries, Britton was sick in the hospital when the regiment was discharged in July 1865.

Struck presumably by lead or fragments of iron on the field of battle, it was wood that ultimately killed Britton in a freak work-related accident in May 1892. Working as an engineer at the Hope Brush Factory in Shoemakersville, Pennsylvania, Britton was struck in an abdomen by a wooden plank that was launched through the air from a circular saw. Sadly, the injury was fatal. Elias Britton was not yet sixty years old. His remains were laid to rest in the Odd Fellows' Cemetery, in Tamaqua, PA.

Posted by John David Hoptak at 6:07 AM No comments: