Is This A New Face of the Forty-Eighth?

I don't know how many times I've said it or heard it said over the years in reference to Civil War soldier photographs and particularly CDVs: "If only they would have signed their names," or "If only someone would have written down their names. . ."

This is the common lament for most who collect Civil War images, and especially for those who collect images of soldiers from just one single regiment, such as the 48th Pennsylvania. But the fact is that for far too many Civil War soldier CDVs, there is no identification, no name...nothing to tell us, really, who they were, what they did, or what became of them during the war or after, if, indeed, there was an after for them. Instead, we have just an image, typically of a young man in a blue uniform, with a look of youthful pride or determination upon their face and more often than not, it seems, an officer. Yet even without a name (and who today writes the names of friends, family, or even oneself on the back of their photographs?), there are sometimes clues we can follow in an unidentified soldier's photograph. What is the photographer's backmark, for example; where was the photograph taken? What kind of uniform is the soldier wearing? Is there anything on that uniform, such as a corps badge or hat brass, to help better narrow down the search? Sometimes, and especially for those who collect from a single regiment or at least for me who has spent twenty+ years searching for 48th PA images, the question is: does he have the look of a 48th Pennsylvania soldier. Not an exact science or question, to be sure. .  .but in many cases, these are the only clues we get.

Have a look at this Civil War soldier CDV, both front and back. . . 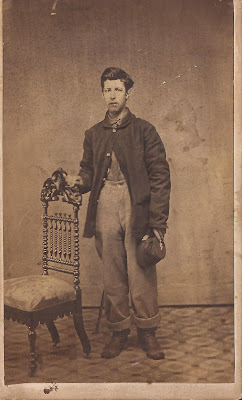 What are your thoughts at first glance?  Is it the youth of this soldier? His rather short stature, perhaps? Maybe his uniform first grabbed your attention; maybe that it appears his uniform is way too big! especially his trousers. The photographer's backmark? That there are letters and numerals on the top of the kepi he is holding? These were the things that immediately caught my attention, along with the thought, at least to me after more than two decades collecting, that this soldier has the look of a the 48th, strange as it sounds.

But was this soldier actually in the 48th? The 48th Pennsylvania was recruited almost entirely from Schuylkill County and Pottsville, the county seat and largest city, was home to a number of photographers during the Civil War, most notably A.M. Allen and Mortimer. This image, of course, has the Mortimer backmark, as does this image of Major Joseph Gilmour of the 48th. . .

As you can see, same carpet, same chair...Were these two images also taken during the same time? The Gilmour image was taken in February-March 1864; was the photograph of the unidentified soldier taken during this time as well, when the regiment was home on furlough and recruiting new members? Was this young man one of those new recruits who joined the regiment in the winter of 1864? Note the absence of veterans' stripes on his uniform and, again, his youthful appearance. . .

Certainly, though, the 48th Pennsylvania was not the only unit to be recruited from Schuylkill County and Pottsville...not by a long shot. There was the 96th PA, for instance; several companies of the 50th PA, several of the 129th PA, and several from the 7th PA Cavalry, in addition to scores of other regiments who drew recruits from Schuylkill County. And, well, during the labor disturbances in '62-'63 and into '64 there were New York and New Jersey volunteer soldiers brought in to the county to help protect against draft resistance and violence and to help ensure the mines kept pumping out the anthracite to fuel the war effort. Many of these New Yorkers and New Jersyians no doubt went to Allen's or Mortimer's studios to have their 'likeness' taken.

But what about that hat brass?

It's really, really difficult to see...partially hidden and upside down.


Trying to make sense of those letters and numbers, I scanned the image into my computer at a high resolution, magnified it, clarified it, and turned it right side up. . .


Is any of this now any clearer?

To me, while I cannot make out the top letter, which would have denoted what company this soldier belonged to (A, B,C,D,E,F,G,H,I,K---and somehow I 'see' an E there), it does appear to me that the middle two numbers are, indeed, a "48" and the bottom letters "PV" for Pennsylvania Volunteers.

Does anyone else see this as well?

Take a step back and look at it from a distance?


Again, it does appear to me that this young man was a soldier in the 48th Pennsylvania.

Or am I just 'seeing' 48 PV because I want to see it?  Are the letters and numbers simply too blurry to tell for sure. . .


Your thoughts, insights, etc, are appreciated!

Posted by John David Hoptak at 6:33 AM No comments: