150 years ago. . .the soldiers of the 48th Pennsylvania remained encamped at Alexandria, Virginia. Lee, Johnston, and a number of other Confederate leaders had long since surrendered their forces; Richmond had long since fallen; and Lincoln long since dead. Even the Grand Review of May 23, in which the 48th had proudly marched, seemed like a distant memory. The war was all but officially over. And so the officers and soldiers of the 48th bided their time as best they could, waiting to be discharged, the regiment mustered out, and simply longing to return home.
Yet 150 years ago, there were a good number of soldiers in the regiment who were convinced that they would be retained in the service and sent off to a new, developing theater of operations: Mexico!
In 1862, with the United States deeply mired in its own civil war, French forces arrived in Mexico and drove Benito Juarez from power. Soon enough Maximilian I of Austria arrived and proclaimed himself Emperor. In Washington, Lincoln and the administration had spoken out loudly against this action, but with their own war to wage and to win, little was done. However, now that the Civil War was drawing to an end, some50,000 U.S. soldiers, headed by General Philip Sheridan, were assembled in Texas, in the hopes that such a strong show of strength would convince the French to leave. Ultimately the French would leave but not until the following year.

With this developing situation and with the 48th remaining essentially inactive in their camps at Alexandria, it was not long before a rumor began to spread that they had been designated to be sent south and attached to Sheridan's force in Texas. Not only that, but the rumor also was that several officers of the 48th had actually petitioned the War Department to select the 48th to take part of this pending action. Soon, this rumor grew its proverbial legs and raced all throughout the camp. The enlisted men, waiting to go home, were outraged and very adamantly opposed to any such notion. So convinced were the men of the validity of this rumor that they, too, drew up a petition, one that was very quickly signed by the sergeants of each of the companies, stating that they represented the wishes of all the men. They did not want to go to Mexico. Period. They just wanted to go home. With the senior officers of the regiment entirely unaware, this petition was sent off to Harrisburg, to the attention of Governor Curtin. Not quite sure what he was supposed to do with this document, Curtin forwarded it to Headquarters, Army of the Potomac. From there, it traveled down the chain of command: to 9th Corps Headquarters, to Second Division, 9th Corps Headquarters, to brigade headquarters. . .and finally, to the attention of Colonel Isaac Brannan, the commanding officer of the 48th. Brannan had assumed command of the regiment in early April, following the death of Colonel George Gowen at Petersburg. And now, surprised, embarrassed, and angry, Brannan attempted to find out who among his soldiers was to blame for first spreading this rumor and for writing up this petition. After interviewing several of the men, it was somehow determined that it was Corporal John Cruikshank, of Company H, who was the principal culprit. For his part, Cruikshank--nicknamed "Crooky,"a 25-year-old machinist from Pottsville--neither admitted nor denied that he was. So Brannan had him arrested and, in an effort to get the truth out of him, ordered Cruikshank to be strung up by the thumbs. . .a most painful punishment. Brannan continued to press but Cruikshank remained obdurate; he would not say anything. Frustrated and embarrassed by the whole situation, Brannan ordered him released.
Cruikshank returned to his quarters, the culprit never positively identified, and the 48th never ordered off to Mexico. . .

From the late summer of 1861 until the date of the regiment's disbandment on July 17, 1865, at least 329 soldiers of the 48th Pennsylvania died, whether in camp, in the hospital, in the prison pen, or on the battlefield. The number is most likely higher still, since the records for a good number of the soldiers are simply not clear nor conclusive; several are simply listed as "Not On Muster Out Roll." And thus far, I have not been able to determine all of these soldiers' fates. Also, it must be kept in mind that this figure does not include those who died after the war and still early in their life from the wounds, the disease, and the hardships of soldiering. General James Nagle, for example, the man who first organized the regiment in the summer of 1866, passed away at age 44 in August 1866 from heart disease, which his physicians determined was caused by the war. There were many others; those who died at age 25 or 30 or 35 throughout the late 1860s and 1870s. But during the conflict itself, at least 329 soldiers of the 48th Pennsylvania lost their lives. This number is much higher than the one provided in the regimental history penned by Joseph Gould, which records only 236 regimental fatalities, and higher than what was initially tallied in the 1865 book Memorial to the Patriotism of Schuylkill County, which records 234 dead from the 48th. A close look at all the sources, however, reveals that at least 328 perished--and likely more. The dead of the 48th--those who died during the four-year-war--lie buried in six states: Pennsylvania, of course, but also North Carolina, Maryland, Virginia, Tennessee, and Georgia, as well as in the District of Columbia, which is a testament to all the hard campaigning the regiment endured from 1861-1865. In terms of the regiment's costliest battles, 2nd Bull Run tops the list with 40 soldiers either killed or mortally wounded. Spotsylvania comes in second. The Battles of Cold Harbor, Petersburg (June 17-18, 1864), Petersburg (April 2, 1865), Antietam, and Fredericksburg were also particularly deadly for the regiment. 1864 was the deadliest year, with 157 fatalities--nearly half of all the regiment's deaths during the war--occurring in that awful year.
A chronological listing of those who died from the ranks of the 48th Pennsylvania, is provided below, along with several of the photographs of those who gave their last full measure. . .
48th Pennsylvania Civil War Deaths


-Surgeon David Minis: Died at Roanoke, North Carolina, N.C., 2/14/1862, of over-exerting himself attending to the wounded


-Franklin Wetzel, Co. A: Died: 8/12/1862; Drowned in the Potomac River as the result of the sinking of the steamer West Point.


-Hesgian Link, Co. I: Missing in Action at 2nd Bull Run; Supposed to have died


-Isaac Arndt, Co. I: Wounded Severely in hip; left on field at Campbell's Station; and Missing in Action, 11/16/1863; Captured, Held Prisoner of War at Andersonville; Not on Muster Out Roll; PA Civil War Service Cards Lists Him As Having Died 3/16/1863 (1864?) at Canard Station, Tennessee.


-Frederick Henry, Co. I: Wounded in Action, 5/25/1864; Supposed to have died from wounds in ambulance and buried by the wayside


-George Airgood, Co. A: Wounded at Petersburg; Died of Wounds


-Corporal Walter P. Aims/Amos, Co. D: Died 7/12/1865 from the effects of starvation and brutality while in Confederate prison


-William Atkins, Co. B: Died at home, while on furlough; Date Unknown 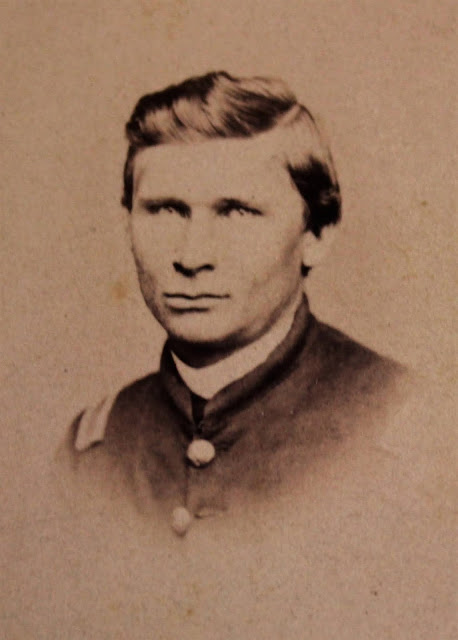 Lt. Henry Clay Jackson
Killed in Action at Spotsylvania May 1864
(Courtesy of Ronn Palm and the Museum of Civil War Images)

Corporal Charles Norrigan
Killed in Action at the North Anna River, Virginia
May 1864
(Courtesy of Ronn Palm and the Museum of Civil War Images) 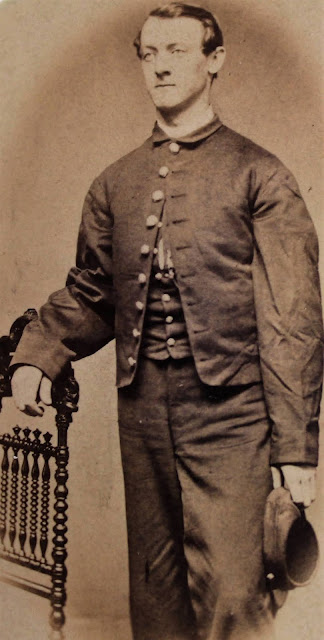 Lt. Curtis C. Pollock
Mortally Wounded at Petersburg, June 1864
(Courtesy of Ronn Palm and the Museum of Civil War Images)
Posted by John David Hoptak at 6:32 AM No comments: