Are These Photographs Of The Same 48th Pennsylvania Soldier? Help Me Identify An "Unidentified" CDV Image

Regular readers of my blog know that I often ask for your help in identifying "unidentified" images of 48th Pennsylvania soldiers.  Soon, I will be posting an update about one such quest launched nearly two years ago but, today, I am hoping for your thoughts and feedback on the following.

One of the first 48th Pennsylvania images I collected was this one: 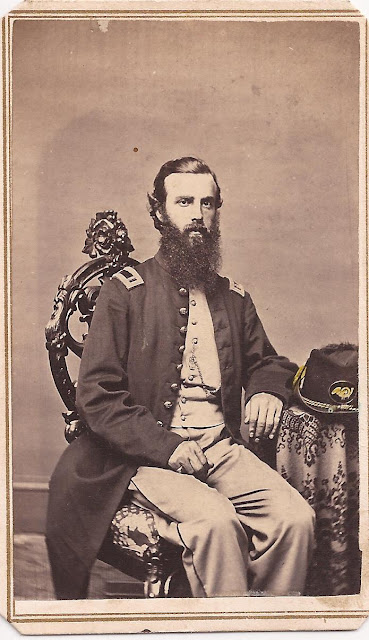 This is an image of an "unidentified" officer--a First Lieutenant, as indicated by the shoulder bars. Within the infantry bugle on his hat are the numbers '48,' and the image was taken by photographer A.M. Allen of Pottsville, PA. So, thus, while "unidentified," it is fairly certain this man was a 1st Lt. in the 48th Pennsylvania.  However, I did not know who, exactly, this 1st Lt. was. . . 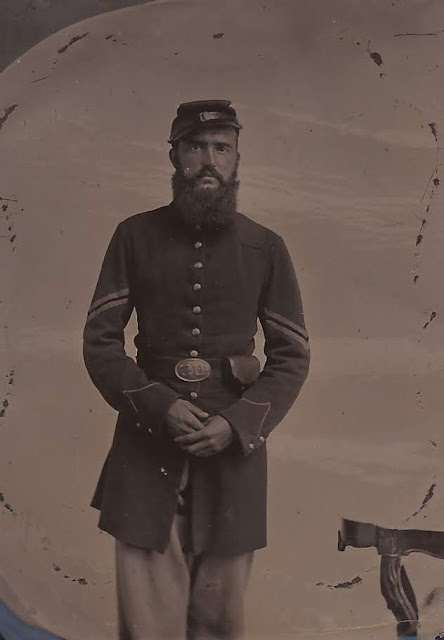 It is a clear and striking image of a young man, wearing the stripes of a corporal. And here is what the records state about the man depicted on the image:

Henry E. Stichter was mustered into service as a Corporal, Company D, 48th Pennsylvania, on September 23, 1861, at age 23. He stood 5'8 1/2" in height, had a "Dark" Complexion, "Dark" Eyes, and "Dark" Hair. He was a painter, originally from Hamburg, Pennsylvania. On September 1, 1863, he was promoted from corporal to 2nd Lieutenant, and to First Lieutenant on September 22, 1864. He was discharged from the service following the expiration of his three-year term of service on October 6, 1864.

Sadly, Stichter did not have long to live. He died on November 13, 1868, at the very young age of 31 in his Pottsville home of consumption. His remains were laid to rest in the Odd Fellows' Cemetery in Pottsville.

So, what do you think? Are the men in these two images one-and-the-same? 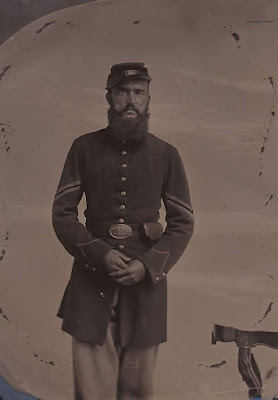 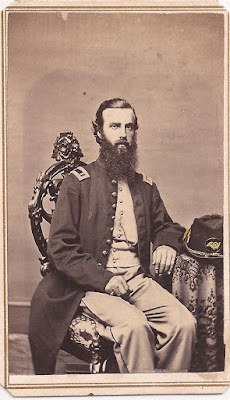 If so, then the tintype image of Stichter as a corporal must have been taken between September 21, 1861, and September 1, 1863. If that is him in the unidentified CDV on the right, then it must have been taken after September 22, 1864, following his promotion to 1st Lieutenant. Perhaps he sat for this image in A.M. Allen's studio upon his return home following his discharge from the army. The man in the CDV looks a bit more gaunt, but that could be the effects of three years in the service.

One more thing. . .
Henry E. Stichter was a member of the International Order of Odd Fellows (I.O.O.F.). Do you see the ring on the right pinky finger of the 1st Lt? Can that be an Odd Fellows's ring?

My thoughts are that these two images are of the same man: first Corporal, then Lieutenant Henry E. Stichter.

But I want to hear your thoughts? Is there something I am missing here? Can we say definitively or not?

Posted by John David Hoptak at 6:56 AM 3 comments: