Soldiers of the 48th: Lieutenant M.M. Kistler, Co. I, And His "Remarkable Tenacity of Life."

Michael M. Kistler was 32 years old when he was mustered into service as a lieutenant in Company I, 48th Pennsylvania Infantry, on August 15, 1861. At 5'11", he was among the tallest soldiers in the regiment, and before the war, he labored as a farmer in the small Schuylkill County village of Ringtown. Surviving the battles that comprised Ambrose Burnside's North Carolina Expedition throughout the winter of 1861-1862 as welll as 2nd Bull Run, Chantilly, and South Mountain unscathed, Kistler fell with a grievous wound on September 17, 1862.
* * * * * * * * * *
While googling the 48th Pennsylvania several years ago, I came across this interesting article that appeared in the March 16, 1864, supplement of the Boston Herald.
"Remarkable Tenacity of Life: Lieut. M.M. Kistler, formerly of the 48th Pennsylvania Volunteers, who still survives, and is commanding a company in the Invalid Corps, was pronounced by the surgeons who examined him after the battle [of Antietam], as he lay among the dead--himself almost as dead apparently as they--mortally wounded, and he was passed by at the time, and the attention of the surgeons was devoted to others, for whom it was thought there might be a chance of recovery. The fortunes of the day seemed to vacillate in the balance as the massive columns surged back and forth, and for a time the field was in possession of the rebels; again our brave fellows drove back the rebel columns, and took the ground where our wounded were lying, weltering in their gore, and in the evening the brave and undaunted Lieutenant was carried from the field by our own men, and laid down in an old barn without blanket or overcoat. His clothes on his right side, from his shoulder down to his boot, being saturated with blood from his wound, were cold and stiff. It was at Antietam he was wounded, by a ball entering his right shoulder in a way to carry his epaulatte into the wound, and part of it with the ball entered the right lobe of the lungs. The wound was probed by no less than eight or nine surgeons, three or four at a time. They exceeded in extracting from the wound the wire, four or five inches in lenght, belonging to the shoulder strap, and all agreed there were fractured pieces of bone necessary to be extracted, but they neither removed them nor dressed the wound, considering the case a hopeless one. The Lieutenant alone believed his recovery a possible case. Thus he laid suffering in his gore until the sixth day when he received a change of clothing, and on the seventh day, with the assistance of his servant, he started, both feeble and faint, and reached his home. On the thirteenth day after receiving the wound, it was for the first time thoroughly dressed, by Dr. J.C. Schirner, of Tamaqua, Penn. Suppuration had by this time taken place, and he spit up a portion of the shoulder strap with the body matter. The ball still remains in the lungs too heavy to be raised by the efforts made in coughing, where an abscess is formed by the wound in the lung, and suppuration takes place, as it frequently does. He now usually enjoys a reasonable degree of health, with the exception of a few days each time that these inward gatherings take place.
This we regard as one of the most remarkable cases of recovery, from what would be regarded by all surgeons as a hopeless case, on record. When we contemplate a man with such a wound, lying for thirteen days without any efficient surgical or medical aid, and without any change of clothing for six days, and in the main cold and damp, without food or attention, we cannot but be struck with amazement at the wonderful recuperative powers of the system, in the case of the indomitable Lieut. Kistler. We would naturally suppose he must have suffered untold misery during those thirteen days, but he says he suffered but little, comparatively speaking. His sensibilities must have been instantly stunned. He is a living miracle to all who know his case. While a slight wound hurries many a strong man to an untimely grave, a strong constitution, a determined and indomitable spirit, and, may we not add, a kind Providence had lengthened out his days for further service in the cause of his country."
* * * * * * * * * *
Following his wound at Antietam, Kistler was naturally discharged from the 48th Pennsylvania, but following his recovery, returned to the army as an officer in the Veteran's Reserve Corps. Regrettably, I have not been able to find anything on Kistler's post-war life. . .but I'll keep looking.
Posted by John David Hoptak at 1:14 PM No comments:

On this Veteran's Day, I would like to take the opportunity to thank two American soldiers for their service: my grandfather, Nicholas Mitsock, and my dad, David W. Hoptak.
* * * * * * * * * * 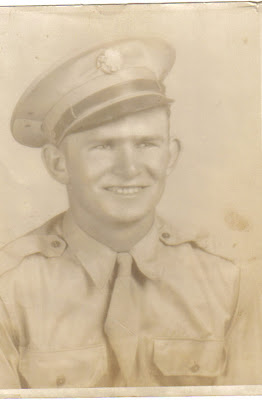 Private First Class Nicholas Mitsock
US Army
My grandfather, Nicholas Mitsock, was a first-generation American. He was born on April 7, 1927, in the small coal mining community of Llewellyn in Schuylkill County, Pennsylvania. He entered the army on December 10, 1945, at the age of 18, and was mustered in as a private in the Headquarters Company, 30th US Infantry Regiment, 3rd Division. He was sent to Europe, and was detailed as a truck driver and truck mechanic. He remained stationed at Stuttgart, Germany, until his discharge in April 1947. He returned to Schuylkill County, found work as a coal miner, married my grandmother, and fathered five children; my mother, Colleen, being born in 1951.
In 1957, my grandfather was killed in a mine collapse. 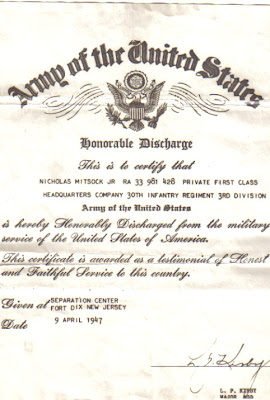 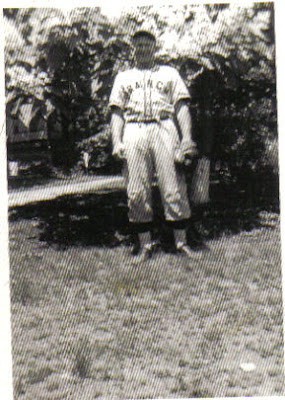 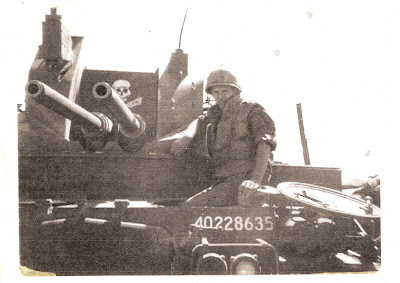 Sergeant David W. Hoptak
US Army
My dad, David Hoptak, was born on July 30, 1946. He graduated high school in 1965, turned 19, and was promptly drafted into the US Army. He did his basic training at Fort Gordon, Georgia, and trained with the M42 tank at Fort Bliss, Texas. In late 1966, he was sent to Vietnam as a soldier in the 1st Battalion, 44th Artillery. He spent the next year stationed at Con Thien, immediately south of the DMZ. He rose to the rank of sergeant, and commanded an M-42 Twin Duster tank. While stationed at Con Thien, his tank battalion was supported by the 3rd US Marine Division, and saw significant combat. The 1st/44th was one of the most highly decorated units in the Vietnam War. In December 1967, my dad was discharged from the army. He boarded the plane at Dong Ha, and began the long journey home. 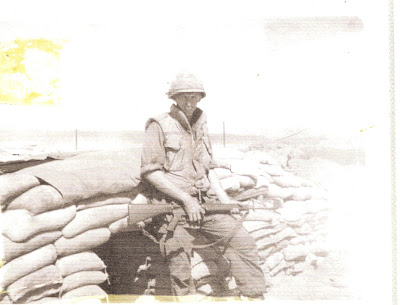 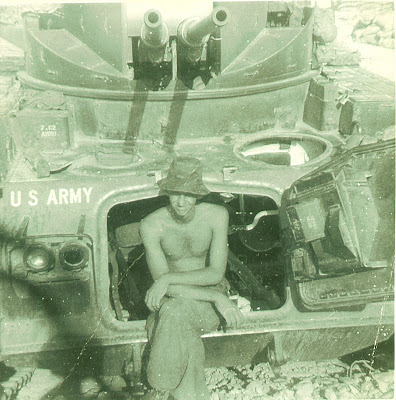 Happy Veteran's Day. And to all our current and former members of the armed services, thank you.

Posted by John David Hoptak at 7:03 PM No comments:

Monument no match for lightning. . .

A month ago, on October 9, the monument to the 6th New York Cavalry here in Gettysburg was (severely) damaged by what must have been a tremendous bolt of lightning. You can read the full story here: http://www.nps.gov/gett/parknews/6th-new-york-cavalry-monument-damaged.htm


I was out on the battlefield yesterday, and snapped a few photos of the damage. I'm just glad this lightning bolt didn't strike me! 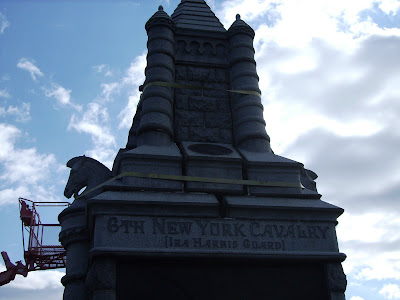 Front view of monument (fronting Buford Avenue)
. . .the damage here is significant, but wait until you see. . . 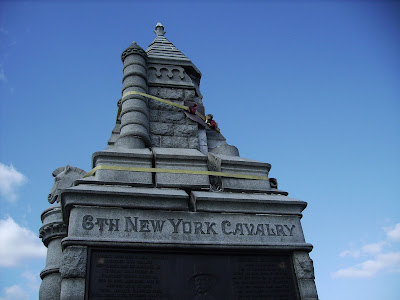 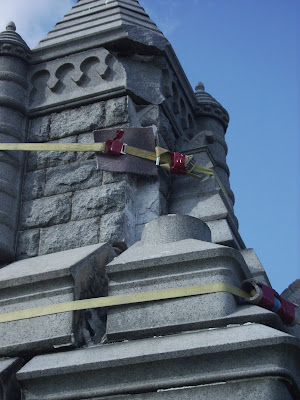 Apparently one of the turrets was blown to smithereens. . . 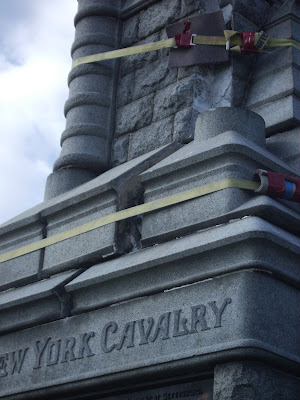 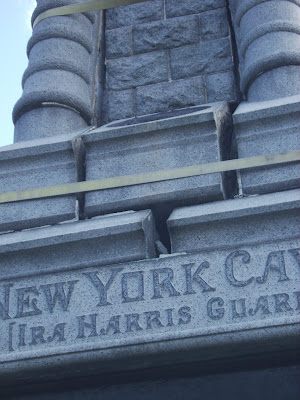 Posted by John David Hoptak at 8:39 AM No comments:

I guess not everyone is cut out to be a soldier. Take Colonel William Christian for example. Now, I feel somewhat bad for poor Bill. A leading member of his community, he sought more prominence by serving in the military. He had militia experience, and was a veteran of the Mexican-American War, although he saw no combat. Back in the army as an officer in the Civil War, Christian proved that, yes, even officers were human. He simply ran away from battle at Antietam, and suffered for it throughout the rest of his life. He was a human being, and he got scared. . .thousands of soldiers did, and thousands showed the white feather in battle. But it just wasn't expected of officers.
Below is a short biography of Colonel William Christian I wrote initially for my colleagues at Antietam. . . .His is truly a sad story.
* * * * * * * * * * 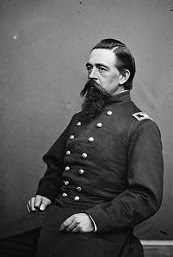