150 years ago, the dirt-covered and weary soldiers of the 48th Pennsylvania were settling into a new 'camp,' as it were, taking up position in the fortification known as Fort Sedgwick but more often called--and more widely known--Fort Hell. Across the way--across the so-'no man's land' between the Union and Confederate trenches that the men had dubbed 'Purgatory,' and on the other side of the Jerusalem Plank Road--was Fort Mahone, or Fort Damnation, which was being held by equally ragged and weary Confederate soldiers who watched for any movement and kept things hot for the U.S. soldiers occupying Fort Hell. The 48th relieved Second Corps soldiers in the fort on November 29 and the Rebs wasted little time in welcoming them to their new quarters. Regimental historian Joseph Gould wrote that the ever-watchful Confederates "let loose to welcome our coming, to give us a house-warming. . . .They commenced early and quit late." Fort Hell itself, wrote Gould, "was a large and strongly-built structure, with bombproofs erected for the protection of the troops." These bombproofs were excavations in the ground, each seven to nine feet in depth, covered with heavy logs and tree boughs. Fort Hell did not leave a particularly strong impression on the men of the 48th, but as with everywhere else it seemed, they would grow accustomed to it. They had no other choice, really, for there, they would spend the winter of 1864-65. . .the last winter of the war.
The distance between Fort Hell and Fort Mahone--which some called Fort Heaven--was only a few hundred yards; the picket lines on both sides were even closer--eighty yards, perhaps--and in some places soldiers in blue and gray struck a deal not to fire at each other during the day, but instead to resume it at nightfall. Gould recalled that between the opposing pickets, conversation and lively trading was kept up regularly.
Picket fire was one thing; shelling was another. Confederate batteries kept up a steady and sometimes deadly fire, with bombs fired by cannons and mortars plainly visible on clear days and clearly audible, especially the heavy "wobbling" sound the mortar rounds made as they traveled toward the Union camps. It did not take the men of the 48th long to discover that the bombproofs, although strongly constructed and useful as night, to sleep in, did little to stop a well-directed mortar round. Large ten-inch shells, said Gould, would cut right through the log-and-thatched roofs of the bombproofs "as a knife would penetrate butter." Watching and listening for these artillery rounds became something of a past-time for the 48th that winter. They grew accustomed to it, although there were several instances of the rounds hitting their mark. 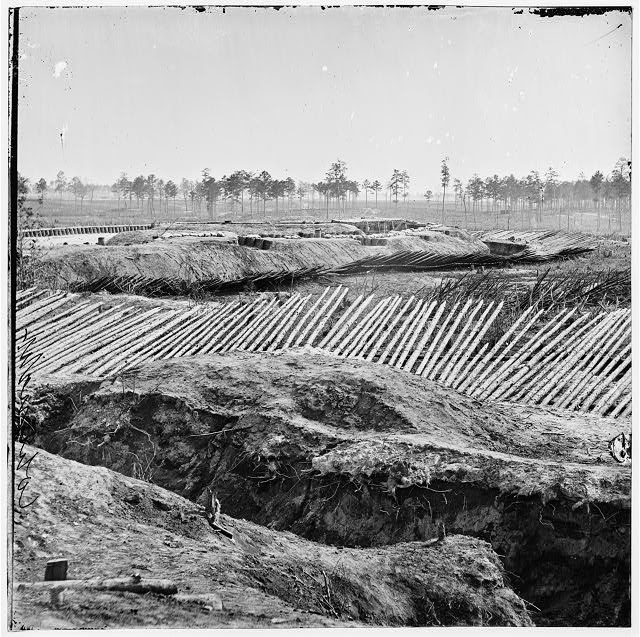 The days passed with but little activity. The men yearning, no doubt, to return home and spend the Holidays there, with their loved ones, instead of in the cold and water-filled trenches outside Petersburg, as temperatures only continued to drop as the weeks went by. They kept up-to-date with all the news and gossip; they had already cheered the news of Lincoln's reelection in November and, that December, would celebrate Sherman's successes in Georgia. But the thought foremost in their minds was when, when would this thing be over, when could they go back home, with peace struck and the nation restored. Far too many would never find out. There would still be fighting ahead, with the onset of spring and the commencement of a new, grand offensive. But that was still many months away. All the men could do was wait. . .and pray that their lives would be spared from those incessant mortars and incoming artillery rounds. Not all were so lucky. December 19 was a day on unusually "hard shelling" and one of the mortar rounds struck squarely into one of Company D's bombproofs, wounding a number of  men including young George Hartz, who succumbed the following day. Nine days later, another ten-inch mortar shell injured ten men belonging the Company K and fatally wounded Corporal John Dentzer. Another man, twenty-eight-year-old Corporal William Livingston of Company C, a laborer from Port Clinton, would be claimed just after the New Year, on January 2, 1865.
* * * * * * * * * * * * * * * * * * *
﻿


﻿﻿ Corporal John Dentzer was twenty-seven-years old when he enlisted into the ranks of Company K, 48th Pennsylvania, in January 1863. He stood 5'4" in height, with a Dark Complexion, Grey Eyes, and Dark Hair. His occupation was listed as "Seaman" and he and his brothers were first-generation Americans, whose father had immigrated to the United States, making a home in Cressona. In September 1862, John's older brother George was killed in action at Antietam.
* * * * * * * * * * * * * * * * * * * *
George Hartz was one of the youngest soldiers in the 48th Pennsylvania, having enlisted on April 30, 1862, at the age of sixteen. He was a student who stood 5'6" in height, with a Sandy Complexion, Grey Eyes, and Sandy Hair. Sadly, young, baby-faced George Hartz was mortally wounded in late December 1864 when a mortar round exploded in his bombproof inside Fort Hell. ﻿

Posted by John David Hoptak at 5:42 AM No comments: