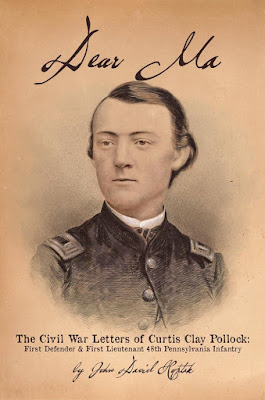 This book was a long time in the making and a project that very nearly never came to fruition. The story of how it all came about can be found here.

You can order your copy either directly through the Sunbury Press website here or at amazon.com or through Barnes and Noble

Description:
Curtis Clay Pollock served bravely with the 48th Pennsylvania, one of the Civil War's most famous fighting regiments, from the regiment’s organization in September 1861 until his mortal wounding at the Battle of Petersburg in June 1864, participating in the regiment’s many campaigns in North Carolina, Virginia, Maryland, Kentucky, and Tennessee and seeing action at some of the war’s most sanguinary battles, including 2nd Bull Run, Antietam, Fredericksburg, and Knoxville. Prior to his service in the 48th, Pollock also served as a member of the Washington Artillery, a Pottsville-based militia company that marched off to war in response to President Lincoln’s first call-to-arms in April 1861 and a company that would have the distinction of being among the very first Northern volunteer units to arrive in Washington following the outbreak of war, reaching the capital on the evening of April 18, 1861, after coming under attack in the streets of Baltimore. In recognition of their timely response and prompt arrival in the capital, Pollock and the other members of the Washington Artillery, would be among those who earned the proud title of First Defender.

All throughout his time in uniform—from the day after he first arrived in Washington with the First Defenders until a few days before receiving his fatal wound at Petersburg—Curtis Pollock wrote letters home. Many of these letters were written to his younger siblings, some were addressed to his father. Most, however, were written to his mother, Emily, whom he affectionately referred to as his “Dear Ma.” Fortunately, many of these letters survive and are held today in the archives of the Historical Society of Schuylkill County in Pottsville. The letters of Curtis Pollock provide us with a window to view the history and experiences of one of the war’s most famous and most well-traveled regiments—the 48thPennsylvania—a regiment that served in many theaters of the war, under many different commanders, and in many of the war’s largest and bloodiest battles; a regiment that endured many battlefield defeats as well as many battlefield triumphs. More than this, though, Pollock’s letters home enable us to gain a further glimpse of the war from the inside. They chronicle and document the actions, the experiences, and the thoughts of a brave young man, who like so many others, volunteered his services and ultimately gave his life fighting in defense of his nation.

Posted by John David Hoptak at 5:51 AM No comments:

A Stone For Captain Fisher. . . 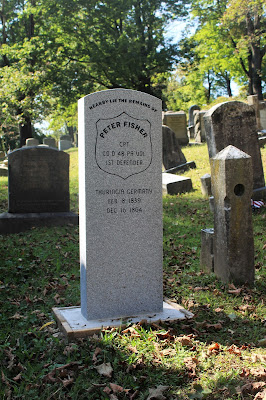 When last in Pottsville, I took a quick drive through the Odd Fellows' Cemetery, where the remains of many 48th Pennsylvania soldiers were laid to rest. Near the plot of those who died or were killed in the Civil War, I was happy to see a new headstone, one for Peter Fisher, a First Defender and a Captain of Company D, 48th Pennsylvania Volunteers. Born in Germany in 1839, Fisher died at the much too young age of 25 in December 1864. His remains were buried in the Odd Fellows' Cemetery but it seems he was never given a headstone. Enter Mr. Charles Achenbach, a descendant of Fisher's, who determined to get him one. Mr. Achenbach contacted me last year and provided me with much great information on Captain Fisher. He made it known then that he wished to place a headstone at or near Fisher's final resting place. . .and I am very happy to see that it has been placed. Thank you Mr. Achenbach for your efforts and your fine tribute.

Click here or more on the life and death of Captain Peter Fisher.

Posted by John David Hoptak at 5:57 AM No comments: