"Our first impressions of Hatteras were not favorable," wrote regimental historian Joseph Gould. "When we relieved the 20th Indiana Regiment, which had previously occupied the post, and saw their deplorable condition, heard their tales of woe and had some experience with the troops--of bugs and things they left to our care--we certainly felt despondent, and 'many a time and oft' wondered 'why we came for a soldier.' However, after spending some weeks on the sandy shores, the soldiers of the 48th, spending their first Christmas and New Year's Day in uniform, far from Schuylkill County, they grew to love Hatteras. Said Gould fondly, "we learned to love the old place in time, and often in our after experience we wished we were back. . . ."

While Company B, commanded by Captain James Wren, remained at Hatteras Inlet to garrison Forts Hatteras and Clark, the remaining nine companies enjoyed more comfortable wooden barracks quarters at Camp Winfield, a few miles further up the island, which was constructed by the men of the 48th shortly after their arrival. "A large earthwork had been erected by the regiment," said Gould, "and it was a very formidable looking structure. We never had any occassions to use it, and our idea at the time of its construction was that it was done to keep us employed."
Drills became more frequent as the days continued to pass on Hatteras. In charge of the area was General Thomas Williams, a career soldier, afterwards killed at the battles for Baton Rouge, Louisiana. Williams was a tough, no-nonsense officer. He "came upon the scene," remembered Gould, "to make our lives miserable. . .by inaugurating five drills per day." But his work in transforming the volunteers into soldiers paid off. "Later we thought better of him as we grew older," admitted the regimental historian, "and as we learned that the extra drills and discipline he enforced upon us did us a great amount of good when we were called upon to assume the heavy work attending the life we had chosen." When the soldiers of the 48th learned of his death, there were "many expressions of sorrow." 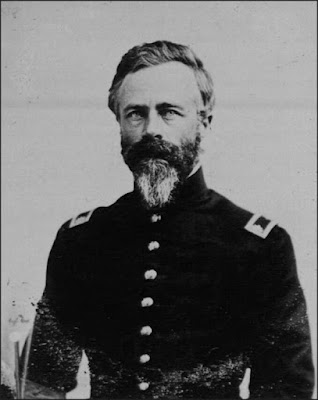 Wallking In The Footsteps of the 48th. . .With Mr. Siegfried

One of the most memorable highlights of this past year at Antietam. . .my sixth, if you count my first year as a volunteer. . .was walking in the footsteps of the 48th Pennsylvania with Mr. David Siegfried, a direct descendant of the regiment's commander at Antietam, Lt. Col. Joshua K. Sigfried. 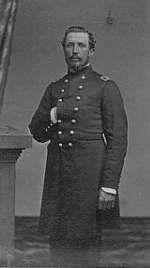 Brevet Brigadier General Joshua Sigfried
Born on July 4, 1832, in my own hometown of Orwigsburg, Joshua Sigfried attended school at the Pottsville Academy then found work with the coal business in neighboring Port Carbon. In the pre-war years, Sigfried organized the Marion Rifles, a militia company that would later serve under Colonel James Nagle in the three-month 6th Pennsylvania Volunteer Infantry. With the expiration of this initial term of service in late July 1861, Sigfried helped in raising what would become the 48th Pennsylvania, recruiting many of the members of the Marion Rifles plus more volunteers from the Pottsville/Port Carbon area. When the 48th was organized in September/October 1861, Sigfried was the regiment's major but the resignation of Lt. Col. David Smith would soon elevate Sigfried to that rank, making him the regiment's second-in-command. When Colonel Nagle was elevated to brigade command in April 1862, Sigfried assumed command of the 48th, which he would lead until the spring of 1864, and at such places as 2nd Bull Run, Antietam, Fredericksburg, and during the regiment's campaigns in Kentucky and Tennessee. In April 1864, Major General Ambrose Burnside, recognizing the leadership qualities of Sigfried, named him a commander of a brigade of United States Colored Troops (U.S.C.T.), a brigade he would subsequently lead during the Battle of the Crater. 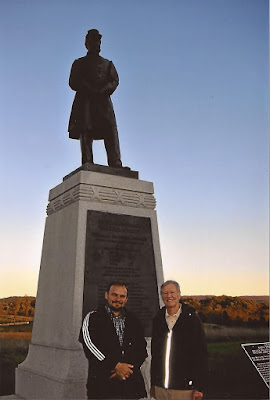 With Mr. Siegfried at the 48th PA Monument


This fall, I had the distinct privilege of taking one of General Sigfried's descedants on a tour of the 48th's actions at Antietam. We spent three hours walking in the footsteps of the 48th, from their supporting operations during the attacks on the Burnside Bridge to their movement to the front late that afternoon to help stem the tide following A.P. Hill's flank assault. Meeting descendants of 48th PA soldiers is always, always a great thrill for me, and after spending years conversing by letter, it was great to finally Mr. David Siegfried and an honor to stomp the battlefield of Antietam with him and his wife. Just like meeting the Dentzer siblings last summer, whose ancestors fought and died as soldiers in Company K, 48th PA, this will rank among my most memorable experiences at Antietam.

Posted by John David Hoptak at 5:06 AM No comments:

Tonight, a candle will burn on the Antietam National Battlefield in honor of George Dentzer, a twenty-five-year-old private in Company K, 48th Pennsylvania, and a one time railroad laborer from Cressona. On September 17, 1862, Dentzer was killed in action near the Burnside Bridge. 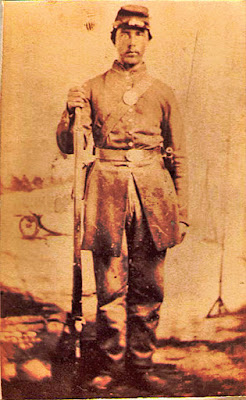 Another will burn in tribute to Private Alexander Prince, a nineteen-year-old laborer from St. Clair, just outside of the Schuylkill County seat of Pottsville. Prince survived the carnage on September 17, only to be struck down and killed the following day while trying to save the life of a wounded comrade. The soldiers of the 48th spent most of September 18 on the firing line, subjected to a sometimes heavy skirmish fire. In between shots the cries of the wounded rent the air. The pleas from one soldier were too much for Prince to bear. At 12:15, he crawled forward on his hands and knees despite the protests from his fellow soldiers in order to take water to a grievously wounded man. Prince delivered his canteen, turned around, and began to crawl his way back to the skirmish line when the wounded soldier begged to be carried back. Prince’s comrades on the skirmish line watched as the young soldier turned back and lifted the man on his back. Suddenly, a shot rang out and Prince fell dead. “Whilst humanely trying to give a wounded comrade just over the skirmish line some water for his parched lips,” recorded Bosbyshell, “a minie ball pierced his heart. His death cry as he leaped into the air, and fell to rise no more, is still heard in the ear of imagination.” Captain Wren concluded that “through his kindness [Prince] lost his own life.”
Prince’s comrades were stunned; most of them no doubt outraged that he had been shot down while trying to save a wounded man. As the hours passed that afternoon, Prince’s body lay just to their front. “We dare not go into to him as the enemy had range on that ground & we was very ancious to get his Body,” wrote Wren. Unable to stand looking at the young soldier’s corpse, some members of the regiment finally crawled forward and were able to bring it in. “I had [the body] taken down to the Bridge & had it Buried in the field near the Bridge,” said Wren, “whear we had the struggle for to get across.” The following morning, Captain Wren met with Alexander Prince’s brother, an artilleryman in the Ninth Corps. “He told me he saw his Brother before he was Buried & I was glad he had seen him, even if he was dead. I gave him his pocket book, which contained $1.30 Cents in money & 3 rings & 5 buttons which I gave to him & also the Bible, he showed me a few days ago & he got his Knapsack yesterday & he being his nearest friend, is entitled to it.”

That same day, Captain Wren also sent John Robinson’s knapsack to Robinson’s father in Pottsville, “Just as he had it packed when he was shot.” Like Prince, Private John Robinson, also just nineteen years of age, was shot on September 18. He suffered for a while but finally succumbed to his wounds in the weeks ahead.

Dentzer, Prince, and Robinson were three of the fifty-nine casualties suffered by the 48th Pennsylvania Infantry at the Battle of Antietam and tonight--December 3, 2011--at the twenty-second annual Memorial Luminaries, a candle will burn, lighting the darkness, for each of these fifty-nine soldiers either killed or mortally wounded. 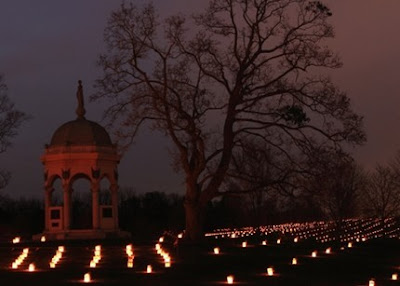 Luminaries burn near the Maryland Monument at Antietam (NPS/Keith Snyder)

More than 23,000 other luminaries will be lit, one for each of men, Union or Confederate, who fell either killed or wounded or went listed among the missing, during this costliest single-day battle of the American Civil War.

Tonight's event will be the seventh luminary I have had the pleasure to participate in, if only helping to park the vast procession of vehicles. Still, there are few more incredible sights to see than the night sky lit up over this hallowed ground by 23,110 candles. It is a number I say everyday at the battlefield, in my interpretation of the fight. It is an easy one to say, but an impossible number to imagine. Antietam's luminaries reveal just how tremendous a figure 23,110 actually is.

If you have not yet seen Antietam's luminaries for yourself, make it a point, one of these years, to do so.

There were a total of fifty-nine casualties sustained by the 48th Pennsylvania at Antietam. Eleven of these men were killed or mortally wounded while the remaining forty-eight sustained non-fatal injuries. The names of these men follow: 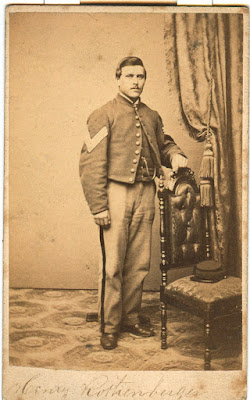 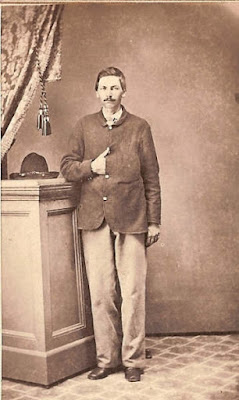 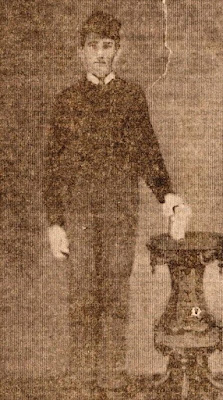 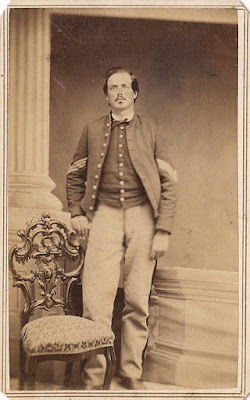