John Cole was forty-four years old in the spring of 1864; a shoemaker from Pottsville, Pennsylvania, who was able to comfortably provide for his family. He had been married already for seventeen years--he and his wife, Caroline, having wed on March 25, 1847, in Philadelphia--and he was the father of four sons: the oldest, Charles, being then sixteen years of age, followed by John Oliver Cole (age 15), Joseph Cole (11), and Alexander Cole (5). Tragically, John and Caroline Cole had lost a child, William Douglas Cole, in the 1850s, but, in that spring of 1864, Caroline was pregnant once more, this time, as it turned out, with a baby girl who would be born in early May and who would be named Estilena. But when Estilena was born, her father was many miles away from their home in Pottsville, serving in the uniform of the United States as a soldier in the 43rd United States Colored Troops (U.S.C.T.).

We can only speculate as to what it was that motivated forty-four-year-old John C. Cole to volunteer as a soldier and fight for a country in which, as African-Americans, he and his family were denied full citizenship and treated as inferior; to leave behind the comforts of his home in Pottsville--his family and his pregnant wife--to don the Union blue. Perhaps it was a strong patriotic impulse; a desire to fight for all the United States stood for and all it represented--the ideals and promises, at least, of the nation's founding. Or perhaps it was a determination to fight for the literal freedom and liberation of four million persons from the brutal bonds of slavery. Or perhaps it was a combination of such aspirations that compelled him to enlist. He became a soldier on March 30, 1864--a private in Company E, 43rd United States Colored Troops, which was a part of the First Brigade, Fourth Division, of the Ninth Army Corps. Commanding that brigade was one of Cole's fellow-townsmen: Joshua K. Sigfried of Pottsville.

Three summers earlier, Sigfried had helped to raise the 48th Pennsylvania Volunteer Infantry, a regiment recruited almost entirely from Schuylkill County and in whose ranks were a good number of coal miners. He had led the 48th from 1862 until the spring of 1864 when he was asked by General Burnside to take command of one of the two brigades of black soldiers that composed the newly-created Fourth Division of Burnside's Ninth Corps. Sigfried's elevation to brigade command allowed for Lieutenant-Colonel Henry Pleasants to assume command of the now veteran 48th Pennsylvania Infantry and in the summer of 1864 it would be Pleasants who would mastermind the engineering and tunneling of the Petersburg Mine, work carried out by his soldiers in the 48th Pennsylvania.

The mine was detonated early on a scorching hot Saturday morning--July 30, 1864. Pleasants's plan had succeeded brilliantly but the follow up assault would prove one of the worst disasters of the war for the Union army. Pleasants and his soldiers, who had labored so hard, in the excavation and tunneling of the mine were exempted from participating in the attack and so, caked with mud and dirt, they watched the terrible ordeal unfold, stunned--and angered, no doubt--that their efforts were so infamously squandered. They would watch as line after line of Union blue--primarily from the 9th Corps--rushed forward, only to have their attack stalled and then stopped in the Crater or just beyond. Lines were enveloped in the smoke and in the dust; soldiers crowded, unable to move, stuck in the blasted Confederate trenches and even in the Crater itself. Efforts were made to break the stalemate at the front, including a determined attack made by the black soldiers of the Fourth Division.

Around 7:30 that hot morning, Col. Joshua Sigfried led his brigade forward. Charging forward within the ranks of the 43rd U.S.C.T. was forty-four-year-old John C. Cole, the shoemaker from Pottsville. As he formed in line prior to the attack--forlorn, as it would turn out--we can only now wonder what he was thinking as he prepared for his first fight. No doubt he thought of his family, 300 quiet miles away in Pottsville; of his wife Caroline, his four boys, and his baby girl whom, sadly, he would never get to see, never get to hold. . .

At some point during the fierce struggle, Private John Cole was wounded. He somehow made it back to Union lines, either on his own or with some assistance. After five painful days in a makeshift field hospital behind the lines at Petersburg, Cole later placed in an ambulance headed toward another hospital, this one at City Point. It was in that ambulance, on August 4, 1864, and during the painful journey to City Point, that John Cole died. His remains were laid to rest hundred of miles away from his home and family in Hopewell, Virginia, at what became City Point National Cemetery, though his stone misidentifies his remains as "B. Cole."


Meanwhile, in Pottsville, in Schuylkill County, Pennsylvania, all the talk about town was on Pleasants and the men of the 48th Pennsylvania--after all, it was these men--their sons, brothers, neighbors--who, despite the failure of the follow-up assault at the Crater, had nevertheless earned great fame and great plaudits as the soldiers who tunneled under the Confederate lines, whose efforts in that endeavor, at least, proved so successful. Throughout the month of August, many columns of the Miners' Journal newspaper were devoted to Pleasants and the work of the 48th Pennsylvania but in the September 3, 1864, edition appeared this notice of the death of Private John C. Cole: 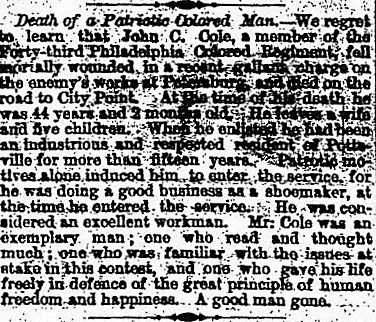 "An industrious and respected resident of Pottsville;" "an excellent workman;" "an exemplary man;" and "one who gave his life freely in defence of the great principle of human freedom and happiness;" "A good man gone."

Posted by John David Hoptak at 7:58 AM No comments: