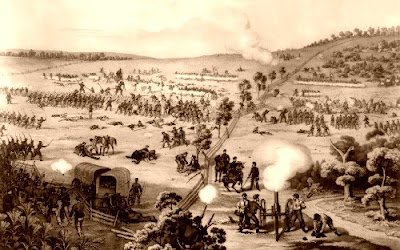 I was very pleased this morning to read on Tim Ware's blog that the South Mountain battlefields have been added to the National Register of Historic Places, encompassing two historic districts, one at Crampton's Gap near Burkittsville, and the other including both Fox's and Turner's Gaps and covering a significant area. Many thanks go out to those who helped make this happen; your efforts are much appreciated.

It has been a good year thus far for matters of Civil War preservation.

Posted by John David Hoptak at 8:59 AM No comments: 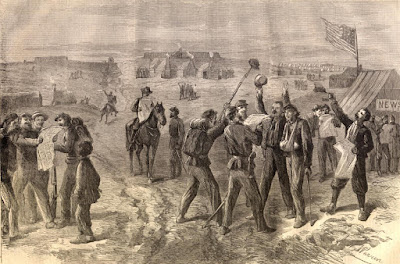 Wal Mart has decided not to go ahead with plans to build near the Wilderness Battlefield. Whatever the reason for this decision, all of those who fought and rallied against it can now justly claim victory, while history and hallowed ground has been preserved. Be proud of your efforts.

This is good news.

Posted by John David Hoptak at 10:41 AM No comments: 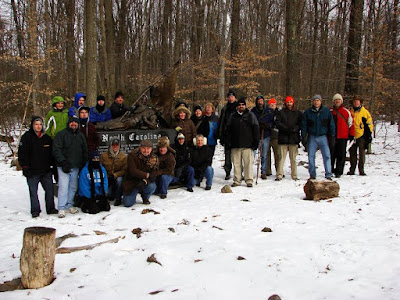 Veterans of the January 22 South Mountain Tour: A Hardy Bunch
Photo by Mike Waricher
* * * * * * * * * * * * * * * * * * * * * *
What would you say the chances are that during the fight for possession of Fox's Gap on the morning of September 14, 1862, one of Sam Garland's North Carolinians or Eliakim P. Scammon's Ohioans turned to the man next to him at one of those momentary lulls in the combat and ask whether he thought that, say, in a 150 or so years. . .on the coldest day of the winter season. . .if people would gather at the scene of the battle to learn of their deeds?
I would say not very likely.
Yet, this is precisely what happened yesterday morning, when I had the great privilege of leading what was, without question, my coldest tour to date. Thirty die-hard, intrepid Civil War enthusiasts gathered at the Old South Mountain Inn at 10:00a.m. to begin a three-hour hike/tour of the battle of Fox's Gap. 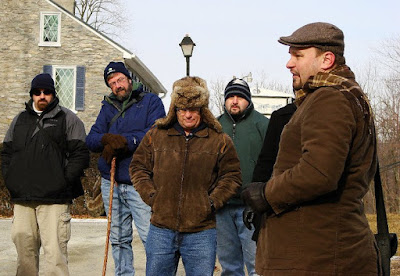 Photo by Mike Waricher
When I awoke Saturday morning, the temperature in Bendersville sat a brisk six degrees. The good news was that it warmed up by the start of the tour. . .to ten degrees!
(At least the wind wasn't blowing).
But the cold did not deter this stalwart bunch. . . who were bundled up and were ready for some good old-fashioned battlefield tramping. It was a wide range of persons in attendance, from Gettysburg Park Rangers and Licensed Guides, Authors, Antietam Battlefield Volunteers and Antietam Rangers, some traveling from as far away as Baltimore, but all who share a passion and a commitment for the study of America's Civil War. And as I told them at the beginning, their willingness to come out on such a frigid day demonstrated that commitment. . .and demonstrated as well that we're all a little nuts. 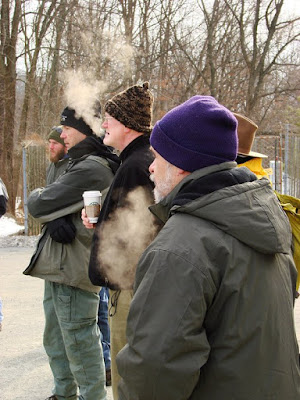 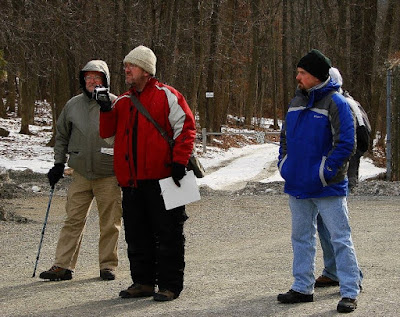 I began with a good twenty-minute overview of the events leading up to the battle of South Mountain, asking those in attendance to forget Antietam ever happened and instead of looking back from the September 17 fight near Sharpsburg, to instead consider what brought the armies to blows on the mountain. Lee did not want to make a stand on South Mountain, but was forced to, having lost the initiative a week into his Northern offensive and having been caught off guard by a fast-moving and aggressive George McClellan, who was hoping to "cut the enemy in two and beat him in detail."
From the South Mountain Inn (aka Mountain House), we trudged along the Appalachian Trail, which during the battle was known here as the wood road, toward Fox's Gap. . .three-quarters of a mile south, following in the footsteps of Garland's, G.B. Anderson's, G.T. Anderson's, Ripley's, Drayton's, Law's, and Wofford's Confederate brigades, all of which used this narrow mountain path to assist in holding back Jesse Reno's Ninth Corps from gaining possession of Fox's Gap, and thus turning the right flank of the Confederates stationed at Turner's Gap.
Despite sometimes slippery conditions, it was a pleasant little jaunt. 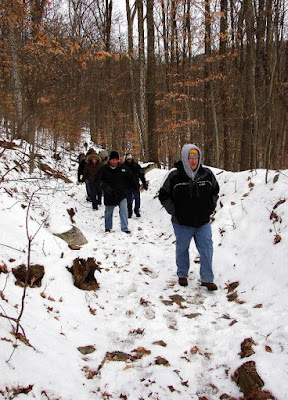 Our focus was on the day-long, thirteen-hour struggle at Fox's Gap; the first shots rang out around 9:00 a.m. and continued until well after nightfall. During the course of that Sunday, eight Union brigades and portions of seven Confederate brigades all played a role in the fight. It was a confusing fight, with units overlapping one another and with attacks launched from east-west and south-north, across much of the same ground. Because of the confusing nature of the battle, and because the landscape/vistas have changed considerably since the battle, and because much of the field remains in private hands, I adopted an interpretative strategy of having "volunteers" hold up regimental placards and placing them into lines of battle.
Here, for example, is Eliakim Parker Scammon's Brigade (the 30th OH, 12th OH, and 23rd OH, from left-to-right) preparing to launch the first Federal assault of the day. 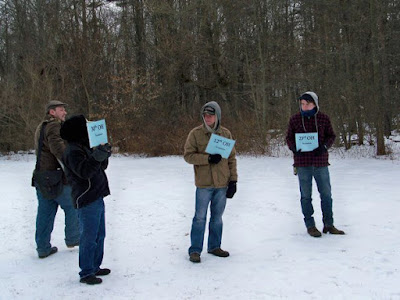 And here is Thomas Drayton's Brigade of Georgians and South Carolinians preparing for deployment. 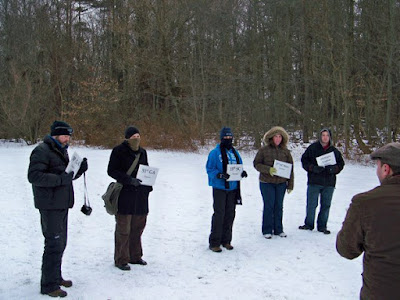 I found this to be an effective way of demonstrating the action, and will continue to work on ironing out the kinks for future tours. Plus, on such a cold day, it kept the blood flowing.

We spent about an hour at Fox's Gap, going through the various attacks and concluding with the death of Major General Jesse Reno at nightfall. From here we marched on down to the North Carolina monument, and then began the return trip. . .one mile, back to our starting point at the Old South Mountain Inn. 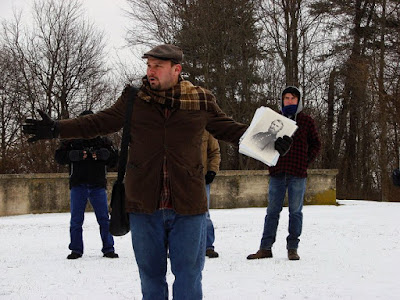 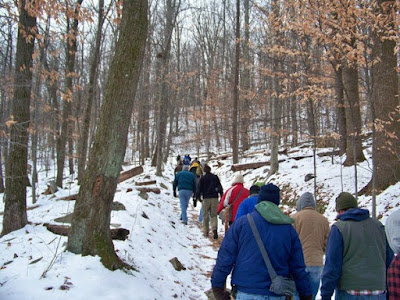 It was a fun day and, despite the cold, an overall enjoyable experience. I would certainly do it again, and indeed we are planning for another such excursion, this one more thorough as we will also examine Crampton's and Frosttown Gaps.
Only next time, we are planning for a spring date. I hope to see everyone there again.
Posted by John David Hoptak at 7:51 PM 1 comment: 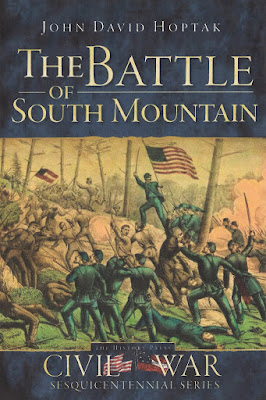 I am very pleased to say that my history of the long-overlooked September 14, 1862, Battle of South Mountain is tentatively set for release on March 8.
What I sought to accomplish with this work was to provide a good narrative accounting of this important battle, examining the events that led up to it, focusing extensively on the fighting at the three main gaps (Crampton's, Fox's, and Turner's/Frosttown), and analyzing its consequences and significance to the overall Maryland Campaign.
The book will form part of the History Press' Civil War Sesquicentennial Series. I was first put in touch with the series editor, Doug Bostick, through my friend Eric Wittenberg, to whom I would like to extend my thanks. Last year, Eric's excellent book on the Battle of Brandy Station was published as part of the same series. It was an honor to be asked to write this book, and I can only hope my work meets the faith they both put in me for this project. It has been a great pleasure to work with Doug and with everyone at the History Press, who at every step were very encouraging and diligent. It was a great experience working with this company, and I do hope I may get to work with them again one day.
So, mark your calendars for March 8 (or thereabouts). The book will be heading off to the printer today. . .January 14.
Click here to become a fan and follow this book on Facebook.
Posted by John David Hoptak at 6:12 AM 4 comments: