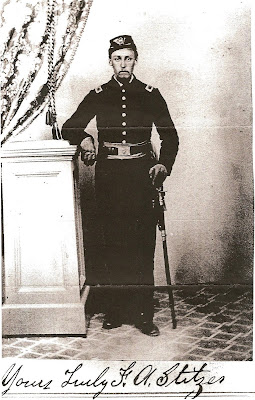 Francis A. Stitzer, a native of the small town of Cressona in southern Schuylkill County, was twenty years old in the spring of 1861. On April 17, he was painting a minister's home in Pottsville, when word spread through the borough that its two militia companies--the National Light Infantry and Washington Artillery--would be setting off for Harrisburg the following morning. As a member of the Washington Artillery, Stitzer dropped his brush--leaving his job unifinished--traveled back home and early the next morning, boarded the train cars and headed off to the "seat of war."
Arriving in Washington late on April 18, Stitzer was among the first Northern volunteers to reach the capital following President Lincoln's April 15 call-to-arms. The Washington Artillerists were assigned to quarters in the Capitol, and he remembered that he and his comrades "set up barricades. . .using barrels of flour, and behind them we awaited our new rifles." The rifles arrived late that night and the following day, Lincoln himself arrived, along with Secretary of State William Seward, who each shook hands with every one of the 575 or so Pennsylvanians who comprised the First Defenders' companies.
After an uneventful three-months in uniform, Stitzer was mustered out only to reenlist as 1st Sergeant of Company K, 48th Pennsylvania. Mustered into service again on October 21, Stitzer rose through the ranks, eventually reaching the rank of captain, and emerging from the war largely unscathed.
After the war, Stitzer was active in the Pennsylvania National Guard before settling in Cheyenne, Wyoming, in 1887. He was named the state's first adjutant general four years later and from 1912 through 1916, served two terms as mayor of Laramie. The aging Stitzer then relocated to Florida where he became a newspaper publisher.
In 1938, the ninety-eight-year-old veteran attended the ceremonies commemorating the 75th Anniversary of the battle of Gettysburg and, while in Pennsylvania, made a visit to Pottsville where he was serenaded by the fife and drum band.
Stitzer was the last surviving member of the five First Defender companies and wanted to make it to the century mark. In August 1939, he wrote to William A. Reid, secretary of the 48th Regiment Survivor's Association, and son of former Company G sergeant and Medal of Honor recipient Robert A. Reid. "I have entered my one hundreth year," said Stitzer, "but have neither ache nor pain. Friends tell me I must reach the 100th mark and beat Father Time to the century."
But Stitzer did not live to celebrate his 100th birthday; he died on October 16, 1939 at his daughter's home in Denver, Colorado. Following his death, only one other member of the 48th Pennsylvania yet lived. . .Charles Washington Horn, Company I, who died in Bethelehem, PA, in 1941. 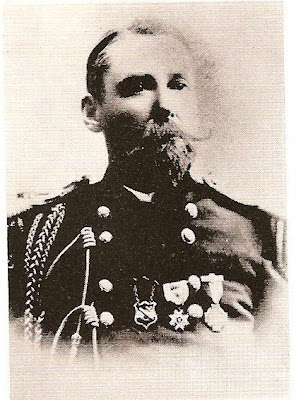 Post-War Image of Francis A. Stitzer