. . .General James Nagle, organizer of the 48th Pennsylvania, passed away at the age of forty-four. He died in his home early that Wednesday morning, around 4:00 a.m., surrounded by his family. 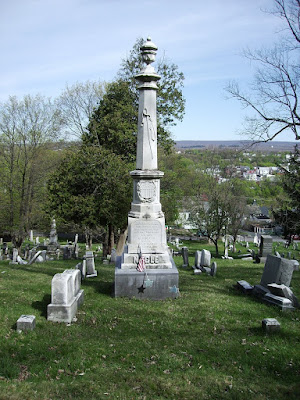 General James Nagle.-Sincere sorrow pervaded this community on Wednesday morning last, when the fact of Gen. Nagle’s death became known. The sad event was not unexpected, for he had suffered for years from disease of the heart and liver, and during the past few weeks it was evident to his friends that he was succumbing to the attacks of adversaries too powerful for medicine to combat successfully. He died on Wednesday morning at 4 o’clock at his residence in this Borough. A brave soldier of two wars; a good citizen; an estimable man, has passed away. While the memory of his worth will remain green in the memories of this community in which so many years of his useful life were spent, his name will be inscribed with honor on the pages of his country’s history.
General Nagle was born in Reading, Pa., on the fifth of April, 1822, and was at the time of his death 44 years, 4 months, and 17 days old. From youth up his tastes were military. In 1842 he organized in Pottsville, where he resided, the Washington Artillery Company. When war was declared against Mexico, he, among the first, tendered the services of his Company, which were accepted. The Company left Pottsville on the 5th of December, 1846, for Pittsburgh, Pa., and was mustered into the United States service as Company B, 1st Pennsylvania Regiment. Gen Nagle, with his Company, was engaged during the entire siege of Vera Cruz, and rendered efficient service. In the Battle of Cerro Gordo he acted as Major of his Regiment. He with his Company and three others of the Regiment, was stationed at Perote Castle, to keep communication with Vera Cruz open, while the army under Gen. Scott, advanced. June 20, 1847, he assisted to route a force of guerillas at Lahoya. October 9, 1847, he fought at Huamantla; on the 12th at Puebla, and on the 19th at Atlixco. In each engagement the enemy was routed with heavy loss. Subsequently he entered the City of Mexico with his Regiment, remained there several weeks, and finally was stationed at San Angel until the close of the war. He was mustered out of the service with his Company at Philadelphia, July 27, 1848. The Company reached Pottsville on the 28th, where it and its commander were received with enthusiasm.
Soon after the return of Gen. Nagle a valuable sword was presented to him by the citizens of this County, as a mark of their appreciation of his services in Mexico.
In 1852 he was elected Sheriff, and subsequently Brigade Inspector and Colonel.
Gen. Nagle was warmly identified with military matters in this County up to the commencement of the Rebellion in 1861, when he was commissioned of the Sixth Pennsylvania (three months) Regiment. He was in the skirmish of Falling Waters. During this term of service he secured the confidence of his superior officers and was complimented by them.
In August, 1861, he organized the Forty-eighth Penna. Regt. for “three years of during the war” of which he was commissioned Colonel. He served with his Regiment at Fortress Monroe, Hatteras Island, and Newbern, and commanded with gallantry, judgment, and discretion, the 1st Brigade, 2nd Division, 9th Army Corps, in the Second Battle of Bull Run. Soon after the battle, he was recommended by Gen. Reno for promotion to Brigadier-General. The appointment was made by President Lincoln. Subsequently, Gen. Nagle was in the battles of Chantilly, South Mountain, and Antietam, and the Brigade greatly distinguished itself. In the carrying of Antietam Bridge which Gen. McClellan. . . . . . . the day, Gen. Nagle’s Brigade performed an important part and was especially complimented.
At Amisville in a skirmish, Gen. Nagle with his Brigade, drove the rebels. In the first battle of Fredericksburg the Brigade fought bravely under its commander and sustained a heavy loss.
Subsequently Gen. Nagle served with his Brigade in Kentucky, until May, 1863, when in consequence of suffering from disease of the heart, which finally caused his death, he was compelled to resign much to the regret of General Sturgess and the troops that Gen. Nagle commanded.
At home rest and absence from the excitements and exposures of the field had a beneficial affect, and his health became so much improved that when Gen. Lee commenced his invasion of Pennsylvania in June, 1863, Gen. Nagle organized the Thirty-ninth Regiment, Pennsylvania Militia, for the emergency an was commissioned Colonel of it. He was mustered in July 6, went to the front, was assigned to command a Brigade, and was mustered out August 3, 1863.
In 1864, Gen. Nagle organized the One Hundred and Ninety-fourth Pennsylvania Regiment, for the Hundred days’ service. He was commissioned Colonel July 31,and ordered to Baltimore. He subsequently commanded all of the troops at Mankin’s Woods-about 8000-and guarded the approaches to the City until the expiration of his term of service. He was mustered out November 5, 1864.
This sums up a military service eventful and honorable. At the time of his death, Gen. Nagle was President of the Council of this borough.

The Funeral of Gen. James Nagle. The remains of Gen. Nagle were interred in the Presbyterian Cemetery on Saturday afternoon last with military honors.
During the morning the Ringgold Band of Reading, which had volunteered to play on the occasion, the Ashland Veterans, Capt. McLaughlin, and the Cumbola Nagle Guards reached the borough to attend the funeral. At noon Capt. Binder of Philadelphia, a companion-in-arms of Gen. Nagle in the Mexican War, having been in the same Regiment, Gen. Albright of Carbon County, and Major Bertolette of Reading, also arrived to assist in playing the last sad honors to the remains of the dead soldier.
The body was viewed by hundreds before the hour of moving from the late residence of the deceased General. The corpse was attired in citizens’ dress, and rested in a coffin furnished by Mr. John Kalbach, Centre Street opposite the Union Hotel. It was made of walnut covered with black cloth, and the ornamentation was faultless, reflecting great credit on the taste of the maker. A silver plate on the lid bore the General’s name and age. The entire workmanship was the subject of much and just commendation. When the coffin was placed in the hearse it was covered with a silk national flag with a black rosette in each corner. On the top rested the sword which was presented to Gen. Nagle by the citizens of Schuylkill County, after his return from Mexico.
About 3 o’clock the cortege moved from the house in the following order, left in front:
Hydranlian Fire Company
American Hose Company
Humane Hose Company
Good Intent Fire Engine Company
Cumbola Nagle Guards
Washington Artillery Company
Ashland Veterans
Grant Zouaves, Pottsville
Ringgold Band, Reading
Soldiers Central League, Pottsville
Detachment of Soldiers in Mexican War
Who were in Gen. Nagle’s Company, bear-
Ing the old Company flag.
Officiating Clergy
Hearse
Pall Bearers—Gen. Wm. W. Duffield, Gen. Geo. C.
Wynkoop, gen. H. Pleasants, Gen. Albright,
Gen. J.A. Hennessy, Col. J.M. Wetherill
Horse and Groom
Mourners
Mounted Officers in Uniform
Gen. J.K. Sigfried and Staff

Posted by John David Hoptak at 7:43 AM No comments: