Let's Work Together To Help Take Care Of The Presbyterian Cemetery in Pottsville! Donate Today.

It is easily one of my favorite places. . .

A quiet, hillside cemetery in Pottsville, Schuylkill County, Pennsylvania.I have walked the uneven and ascending ground there among the silent, and in some places broken stones many a time. And to this day, whenever I make a visit to Schuylkill County to spend some time with my family, I try my best to make a stop at this historic graveyard, if only for a few minutes.

Once inside the Presbyterian Cemetery at Tenth and Howard Streets in Pottsville, one is simply surrounded by history; Civil War history in particular. And once inside, one can imagine this as once a beautiful, Civil War-era graveyard. With a little imagination, one can see the horse-drawn hearses entering the gates, with mourners dressed in black lined along the brick walkways as the community turned out to honor its dead. You might even imagine the military salutes fired over some of the graves.

Buried within the Presbyterian Cemetery are some of Schuylkill County's most noteworthy Civil War heroes. Brigadier General James Nagle is laid to rest there. In 1842, Nagle organized the Washington Artillerists, a militia company he would captain during the War with Mexico from 1846-1848. During the American Civil War, Nagle raised and commanded no less than four regiments of Pennsylvania Volunteers, including the famed 48th Pennsylvania Infantry. Nagle also commanded a brigade in the thickest of the fights at 2nd Bull Run, Antietam, and Fredericksburg.  The strain for this service took a toll and in August 1866, Nagle died at the age of 44. The funeral held for him at the Presbyterian Cemetery was one of the largest ever witnessed in the city of Pottsville.

All four of James Nagle's brothers fought in the Civil War as well; and three of them lie buried nearby their general-brother: Daniel, Philip, and Levi Nagle.  Buried nearby, too, is Emerguildo Marquiz. In 1847, after American forces entered Mexico City, young, eight-year-old Emerguildo was orphaned. He attached himself to the camp of the Washington Artillerists and when the company returned home to Pottsville in 1848, Emerguildo came along as well. He was adopted by James Nagle and raised as one of his own children. Like his adopted dad, Emerguildo served in the Civil War; first in the 6th Pennsylvania Infantry, then as a bugler in the 3rd Pennsylvania Cavalry. When Nagle was promoted to brigadier general, Emerguildo joined his staff as the brigade bugler.

Robert Ramsey, who served on the staff of Major General George Thomas--the "Rock" of Chickamauga--is also interred in the Presbyterian Cemetery. Ramsey served faithfully and well throughout the conflict, but died of laryngeal phthsis at the much-too-young age of 38 in 1876.

Medal of Honor recipient Jacob Frick, Colonel of the 129th Pennsylvania Infantry, who in late June 1863 ordered the burning of the Wrightsville Bridge during the Gettysburg Campaign, is laid to rest in the Presbyterian Cemetery, as are the remains of Major Lewis Martin, of the 96th Pennsylvania, and Joseph Gilmour, of the 48th Pennsylvania, both of whom died in combat during the Civil War; the former during the Battle of Crampton's Gap, and the latter at Armstrong Farm, near Cold Harbor, Virginia.

There are so many more stories to tell of those interred in the Presbyterian Cemetery, but the pressing story of today is the condition of the cemetery. Sadly, it has fallen into disrepair, despite the best efforts of Presbyterian Church leaders and members.  And now, they are calling for help. Money is needed to help in the maintenance and upkeep of the Cemetery, especially $1,500.00 that is needed to remove a dead tree.

Let's show that we still care and that we still remember and honor those who served.  Let us work together to raise the money needed, and then some. As Tom Shay, a friend of mine and fellow Schuylkill County Civil War historian, so eloquently explained: "You can tell a lot about a community by how they treat their dead, how well they upkeep their cemeteries, and respect the ground on which loved ones stood and mourned the deceased. The care and preservation of the Presbyterian Cemetery is an ongoing challenge to ensure its continuous upkeep and protection. We are always seeking help from caring people who realize the wonderful history that is contained in the stories that the stones can tell."

For additional information on the effort to remove this tree and to help maintain the historic Presbyterian Cemetery, watch this news report from WNEP-16, and this one from PA NewsReport. 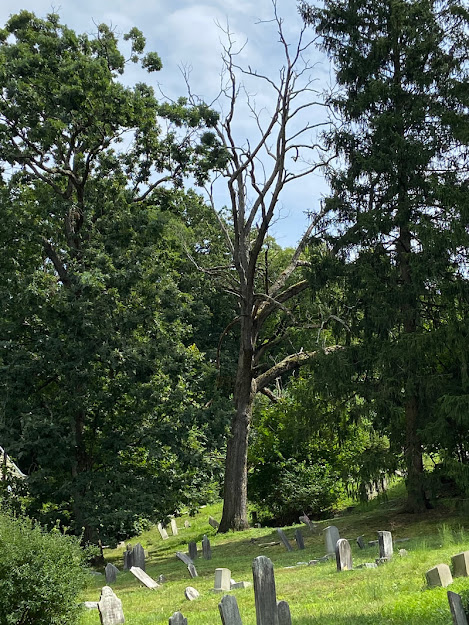 Posted by John David Hoptak at 11:50 AM No comments: