This blog has been quiet for a while. . .a long while. Simply stated, I've been spending all of my spare time working on the Gettysburg title for The History Press' Civil War Sesquicentennial Series. I was able to get an extension on my deadline and I'd imagine you all heard my sigh of relief when my editor approved of it! I am pleased to say that I am 3/5 finished, but that deadline is still fast approaching and I still need to hammer out the Day One and Day Two Chapters.

But today I received an email from Dave Maher, a good friend, Antietam Park Volunteer, and fellow blogger. Turns out he was at the US Army War College in Carlisle and stumbled across this photograph of William R.D. Blackwood, which they had incorrectly labeled as a member of the "48th Pennsylvania Sharp Shooters"! (I think you will see why they thought this. . . ) 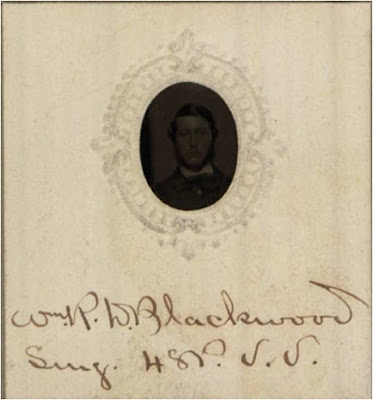 But those aren't 'esses,' they are, instead, two 'v's, which stood for Veteran Volunteers. I had never seen this photograph of Blackwood before, and this inspired me to put the Gettysburg stuff aside for a few minutes and do another PROFILES piece. (It's been far too long since I last did one).


Strangely enough, my last post concerned the death of the 48th's surgeon, David T. Minis in early 1862. The man examined in this Profiles piece, William Blackwood, was the 48th's last surgeon.

He was an interesting figure. Brave under fire, he was also one of three soldiers in the 48th PA whose heroics under fire were recognized with a Medal of Honor.

William Robert Douglas Blackwood was born in Hollywood, Ireland, on May 12, 1838. Immigrating to the United States, Blackwood settled in Philadelphia where he entered and later graduated from the University of Pennsylvania medical school. His first service in the Civil War, it seems, was with the 149th Pennsylvania, part of Colonel Roy Stone's First Corps brigade, which Blackwood entered as an Assistant Surgeon. His service with the 149th must have been brief, however, for on April 28, 1863, the twenty-five-year-old doctor was transferred to the 48th Pennsylvania and promoted to Chief Surgeon. 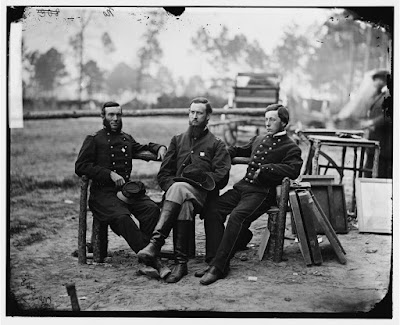 Blackwood (right) with two other surgeons of the First Division, Ninth Army Corps

Blackwood served with the 48th for the final two years of the conflict, was brevetted a lieutenant-colonel to date from March 13, 1865, and was honorably discharged with the regiment, on July 17, 1865. 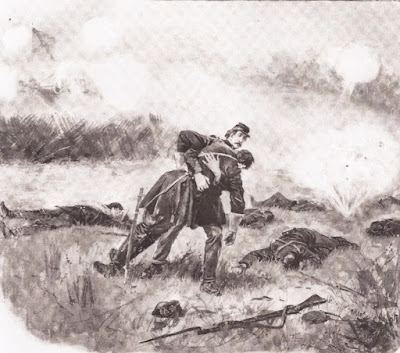 
The April 2, 1865, attack on Fort Mahone was the 48th's final battle action of the entire war. . .and one of its deadliest. The regiment lost several men killed, including its commander, Colonel George Washington Gowen, and dozens wounded. During the heat of the battle, Surgeon Blackwood raced to the front to bring in a number of severely wounded soldiers. His citation reads: "Removed severely wounded officers and soldiers from the field while under a heavy fire from the enemy, exposing himself beyond the call of duty, thus furnishing an example of most distinguished gallantry." 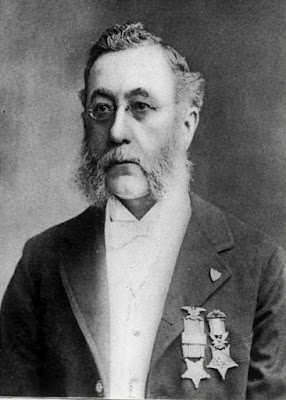 A Post-War Image of Doctor Blackwood


Blackwood remained active in veterans' affairs following the war and especially with the 48th's Veteran Association. He delivered the address at the dedication of the regiment's monument at Antietam in September 1904.

Blackwood died on April 26, 1922, one month shy of his eighty-fourth birthday. His remains were laid to rest in Chelten Hills Cemetery, in Philadelphia. For whatever reason, his grave remained unmarked for another 84 years before this one was finally placed. . . 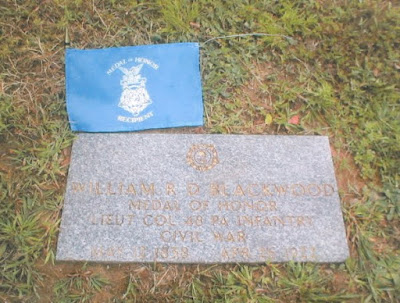