Shedding Some Light on Thomas Welsh. . . 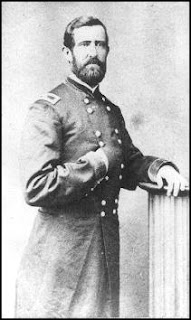 Brigadier General Thomas Welsh
I had the great privilege today to participate in a symposium commemorating the life and forgotten services of Columbia, Pennsylvania's "favorite son," Brigadier General Thomas Welsh. I have a great interest in those Civil War figures who have never fully received their due, including Welsh. What particular draws me to General Welsh is the similarities between him and Brigadier General James Nagle, who I have championed on this blog for the past two years. Welsh and Nagle were natives of Pennsylvania, both served as volunteers in the Mexican-American War (Nagle as a captain, Welsh as a sergeant and then lieutenant), both became leading members of the respective communities, Nagle of Pottsville and Welsh of Columbia, and both answered the nation's call again in 1861. Nagle organized the 48th Pennsylvania, Welsh, the 45th Pennsylvania. Both units served in the 9th Corps, and both Welsh and Nagle would rise to the rank of brigadier general of volunteers. And, sadly, both died way too young. Welsh succumbed to malaria in August 1863 at the age of thirty-nine; Nagle died of heart disease almost exactly three years later, in August 1866, at the age of forty-four. Because of my interest in both Welsh and the 9th Corps, an interest that dates a long ways back, when I was asked earlier this year if I would be interested in participating, I jumped at the chance. I am very glad that I did so.
Mr. Rick Wiggin, a descendant of General Welsh, organized this symposium event, the second annual. In addition to my presentation, the were three others that addressed Welsh's service in the Mexican War (where he fell seriously wounded at Buena Vista, a musket ball shattering his leg), the burning of the Columbia-Wrightsville Bridge on June 28, 1863, and the reaction of the people of Columbia to the memorable, if sometimes overstated event, including that of Welsh's wife, Annie, and, finally, Welsh's legacy to his community and his country.
The symposium started at 1:00 p.m., but I arrived in Columbia an hour or so ahead of schedule so I figured I'd pay my respects to the general, buried in the Mount Bethel Cemetery.
As I searched the graveyard, I, of course, snapped some pictures of other Civil War burials. One grave that caught my attention was that of Major Edward Kelsey, of the 45th PA, mortally wounded at Cold Harbor. Note the very distinctive 9th Corps badge on the stone: 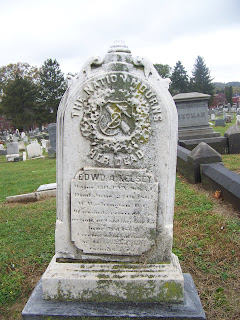 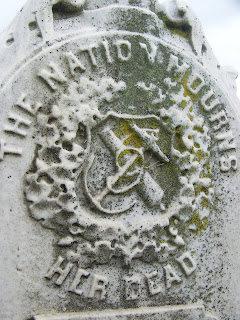 As I continued walking through the cemetery, I came across another interesting grave, that of George W. Derrick, a 43-year-old private in Company B, 45th, who was killed in action at the Crater in July 1864. 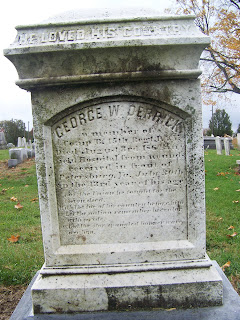 At last, I came upon General Welsh's burial site. Welsh survived bullets in two wars, only to fall victim to malaria during the final days of the Vicksburg campaign in the summer of 1863. 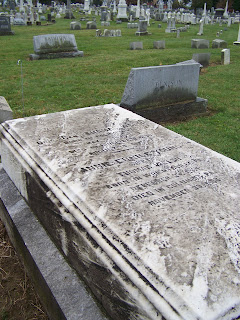 After wandering through the cemetery, I made my way to the Columbia Public Library, which sponsored the symposium. It was a great pleasure to meet Mr. Wiggin, and the other presenters. I spoke of Welsh's role at the battle of Antietam, and argued that not only was the battle one of missed opportunities for the Army of the Potomac, but it was also one of missed opportunities for Thomas Welsh as well. He and his men stood on the precipice of greater laurels during the 9th Corps's afternoon attack against Lee's critical right flank, only to have that opportunity vanish when orders were received to fall back just as Welsh's men were reaching the very streets of Sharpsburg itself and just on the verge of a decided victory. Judging from the feedback I received, the talk went over very well with both my fellow presenters and the audience, which numbered well over fifty people. Seeing the great turnout and appreciating Mr. Wiggin's efforts in helping to shed light on Welsh's forgotten service, I am somewhat tempted to organize a similar symposium-type event commemorating General Nagle. Stay tuned.
In addition to the great pleasure it was to participate, I had the opportunity to view many of Thomas Welsh's personal effects, generously displayed by Mr. Rick Abel, an avid collector of Welsh artifacts and memorabilia. 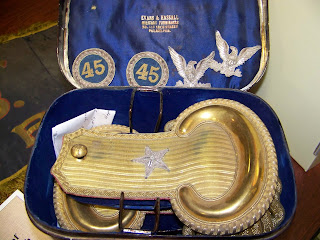 Welsh's epaulettes. . .note the circular "45's" and the eagles, plus the star on the epaulette, each indicating rank. 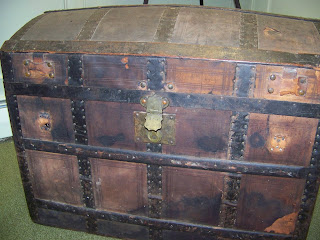 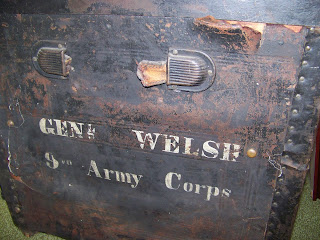 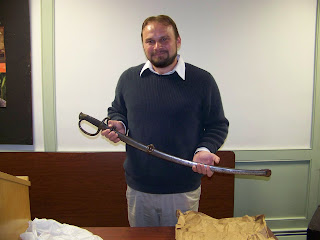 Last, but certainly not least, I had the honor of holding Welsh's Civil War combat sword. . .a sword he very well may have wielded during the heavy action at South Mountain and Antietam.
Posted by John David Hoptak at 5:37 PM 1 comment: 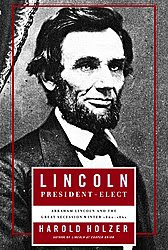 In just two short weeks, Americans will elect their next president, the nation's forty-fourth. No matter the victor, this year's election will no doubt go down as a historic one. But perhaps America's most historic presidential election, and certainly the most significant, occurred 148 years ago, in November 1860.
With threats of secession and the "momentous issue of civil war" at stake, and as the nation headed further toward that "irrepressible conflict," Americans elected Abraham Lincoln, of Illinois. Although he received the lowest percentage of votes in American history (less than 40%), and although his name did not even appear on the ballots in several of the Deep South states, Lincoln prevailed in large part due to the divided Democratic Party--which ran two candidates, Stephen Douglas and John Breckinridge--and yet another contender, John Bell, of the short-lived Constitutional Union Party. Following Lincoln's election, America entered, in the words of Henry Adams, the "Great Secession Winter" of 1860-1861, during which seven states left the Union while the lame-duck president James Buchanan did little, if anything, to stop them. To say, then, that president-elect Lincoln would assume a difficult challenge upon entering the White House in March 1861 would be an exercise in understatement.
Being both fascinated by Abraham Lincoln and having a great interest in American presidential history, I agreed several weeks ago to read and review Lincoln President Elect, by Harold Holzer, one of the nation's foremost Lincoln scholars. With nearly 500 pages of text, this book provides a detailed day-by-day and, in some cases, minute-by-minute account of Abraham Lincoln's actions and decisions from his election in early November 1860 until his inauguration in early March 1861. With a clear and fast-paced style, Holzer takes us through Lincoln's period of "masterly inactivity" as the nation drifted apart and explains Lincoln's stoicism in refusing to agree to or promote any kind of compromise that would address the "grievances" of the South and attempt to save the Union by essentially overturning the decision of the American people in electing Lincoln. We learn of Lincoln's efforts to establish a presidential image, the difficulties he encountered in trying to shape his Cabinet, and how he was continually besieged, even plagued by office-seekers. At the same time, Holzer recounts Lincoln's historic inaugural journey, including his infamous passage through Baltimore, and his drafting of his famed first inaugural address. In summarizing Lincoln's actions during that Great Secession Winter, Holzer writes, "[He] had successfully maintained a masterly inactivity and public silence to prevent the spread of slavery, privately fought a bare-knuckle political battle to bar unprincipled compromise, and brilliantly introduced himself to the press and people of the North with a new look, new images, and a new style of informal oratory along a triumphant voyage to the capital. And then, despite a giant step backward at Baltimore that might have crippled less agile leaders, he had recaptured public confidence while harmonizing a balanced and brilliant cabinet. And," concludes Holzer, "he had crafted one of the nimblest and most eloquent of all inaugural addresses, one that not only reiterated his devotion to the rule of law and invoked the emotional power of national tradition, but maintained that slavery could be maintained without compromising founding principles." [Pg. 458]
In the end, Holzer presents a convincing challenge to the established notion of a wavering, uncommitted, and perhaps even delusional Abraham Lincoln in the wake of his election. At the same time, he further cements himself as an eminent Lincoln scholar. I enjoyed reading Lincoln President Elect and believe that others, with similar interests in Civil War and presidential history, will enjoy it as well. In the seemingly endless catalog of Lincoln titles that has already appeared and will continue to do so over the next year as Americans commemorate the 200th Anniversary of Lincoln's birth, this work will surely rank among the best and most important.
Posted by John David Hoptak at 6:23 AM 4 comments: 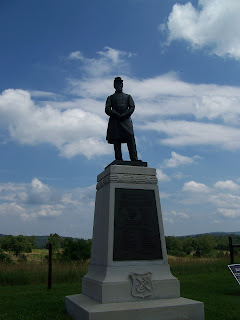 A little over six months ago--back on April 5--I launched an effort to restore the 48th PA monument at Antietam by raising money to replace the missing sword from the bronze statue of Brigadier General James Nagle.

I have been most pleased with the progress thus far of this undertaking and have gotten some good press, including a full-page in the current (November) issue of America's Civil War.

Today I received a generous donation that brought the total amount of money raised over the $4,000.00 mark.

This means we need just $2,800.00 to go. I anticipated the fundraising to last over a year, but at this rate it seems we will get there sooner rather than later.

If you are interested in donating, or if you would like to learn more about the project, please visit www.amonumentaltask.blogspot.com

Posted by John David Hoptak at 9:44 PM No comments: