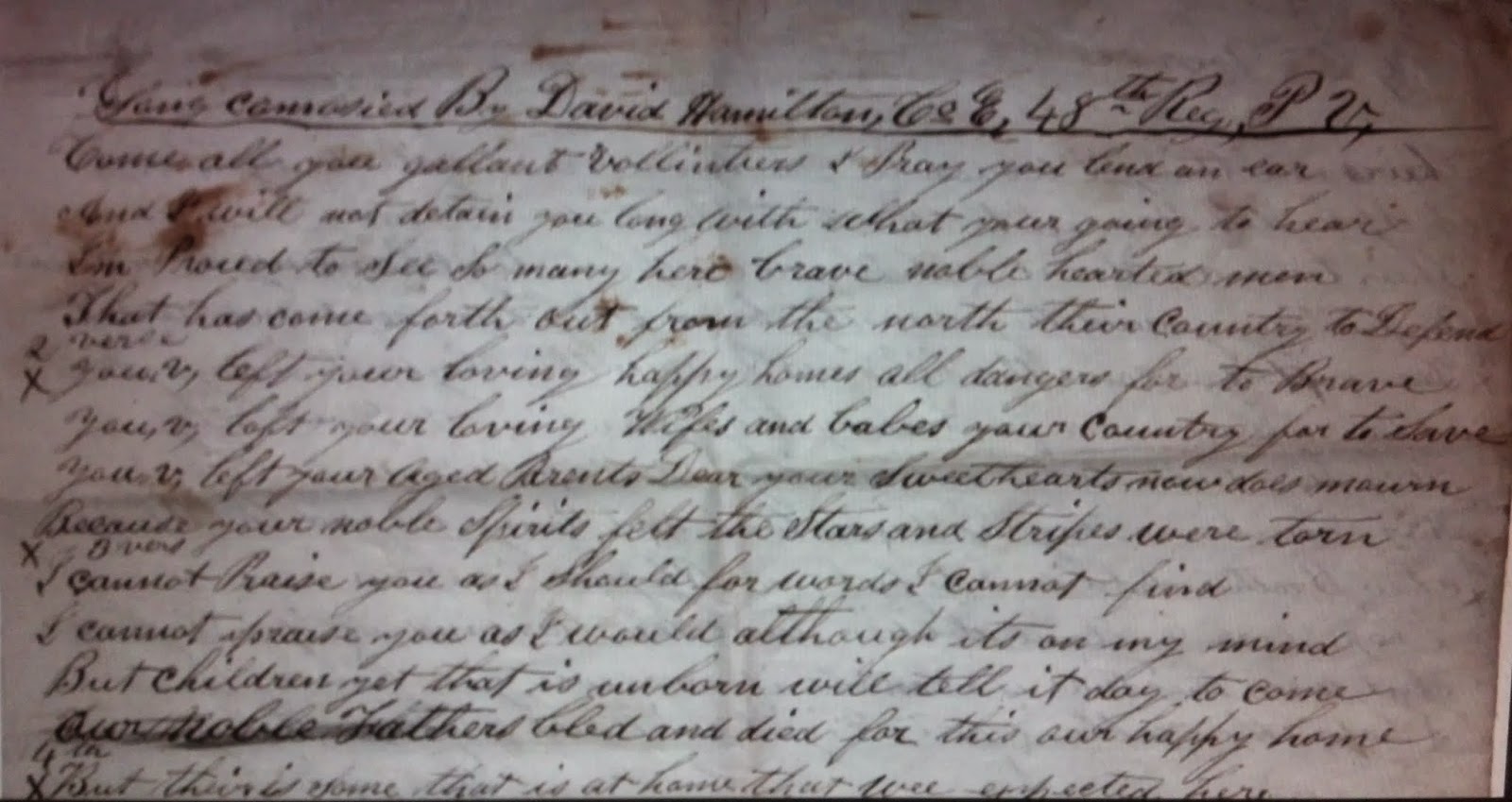 Little is known about Private David Hamilton of Company E, 48th Pennsylvania. He volunteered in late November 1861 and was mustered into service on December 9. The muster rolls held at the state archives list his age at 44, while another source gives his age as 35. Either way he was among the older enlisted soldiers in the regiment. He stood 5'6" in height, had a Light Complexion, Sandy Hair, and Blue Eyes. He was a farmer by profession who made his home somewhere in Schuylkill County. The regimental roster provided in Joseph Gould's regimental history states that Private Hamilton was "Sick in Hospital" in December 1862 and that when the regiment disbanded in July 1865 he was simply "Not on muster out roll." There is no pension file for Hamilton and, indeed, no service records for a "David Hamilton" in the 48th Pennsylvania Infantry. Whether Hamilton was discharged and sent home or if he succumbed to his illness we simply do not know.
We do know, however, that David Hamilton liked to compose poetry and songs. One of his works, entitled "Song for the 48th P.V.V." is currently held at the United States Army Heritage and Education Center in Carlisle, Pennsylvania, and can be read here.
And just yesterday, a previously unknown song composed by Hamilton appeared for sale on ebay. This one has no formal title, simply "Song Composed by David Hamilton, Co. E 48th Reg. P.V." From the contents, it is likely this one was written in either late 1861 or early 1862.
Please click here to view the entire listing and to see images of the song. The following is a transcription, with Hamilton's original spelling intact:


"SONG COMPOSIED BY DAVID HAMILTON, Co. E, 48th REG, PV "COME ALL YOU GALLANT VOLLINTERS & I PRAY YOU LEND A EAR
AND I WILL NOT DETAIN YOU LONG WITH WHAT YOUR GOING TO HEAR
I'M PROUD TO SEE SO MANY HERE BRAVE NOBLE HEARTED MEN
THAT HAS COME FORTH OUT FROM THE NORTH THEIR COUNTRY TO DEFEND
2 VERSE
YOU'V LEFT YOUR LOVING HAPPY HOMES ALL DANGERS FOR TO BRAVE
YOU'V LEFT YOUR LOVING WIFES AND BABES YOUR COUNTRY FOR TO SAVE
YOU'V LEFT YOUR AGED PARENTS, DEAR YOUR SWEETHEARTS NEW DOES MOURN
BECAUSE YOUR NOBLE SPIRITS FELT THE STARS AND STRIPES WERE TORN
3 VERSE
I CANNOT PRAISE YOU AS I SHOULD FOR WORDS I CANNOT FIND
I CANNOT PRAISE YOU AS I WOULD ALTHOUGH ITS ON MY MIND
BUT CHILDREN YET THAT IS UNBORN WILL TELL IT DAY TO COME
OUR NOBLE FATHERS BLED  AND DIED FOR THIS OUR HAPPY HOME
4TH
BUT THEIR IS SOME THAT GAVE THEIR NAMES TO JOIN US IN THE WAR
BUT WHEN THE PEORIED DID ARRIVE FOR THEM TO MARCH AWAY
THEY SYGHED AND SAID WE ARE AFFRAID AT HOME WE'RE BOUND TO STAY
5
SOME OF THEM CAME TO HARRISBURG AND TARRIED THREE DAYS
THEY EAT OUR BISCUIT AND OUR SOUP OUR PICKLED PORK AND PEAS
BUT WHEN THEY DID OUR CANNONS SEE THEY LOOKED IN GREAY DISMAY
LIKE COWARDLY DOGS THEY HID THEIR TAILS AND QUICKLY RAN AWAY
6
SUCH CHIKEN HEARTS WE DO DISDAIN WEE WILL HAVE NONE OF THEM
IF THEY WERE MUSTERED IN OUR RANKS THEY WOULD US SPELT TO SHAME
WEE  WANT NO COWARDS IN OUR BANDS THAT WOULD OUR COLOURS FLY
WEE CALL FOR VALIOUR HEARTED MEN WHO ARE NOT AFFRAID TO DIE
7
THE PENNSYLVANIA FORTY-EIGHT ARE LIKE MEN OF RENOWN
THEY ARE NOT AFFRAID TO GIVE THEIR AID TO PUT REBELLION DOWN
WITH COLONEL NEAGLE AT THEIR HEAD HIS NAKED SWORD IN HAND
THRAUGHT THE LAND HE'LL LEAD HIS BAND THE UNION TO DEFEND
8
TO SEE THIS REGIMENT ON PARADE HOW MARTIAL THEY APPEAR
ALL ARMED AND DRESSED IN UNIFORM THEY LOOK LIKE MEN OF WAR
THEY ARE THE BOYS THAT FEAR NO NOISE WHERE THUNDERING CANNON ROAR
WITH HEARTS OF STEEL THEY'LL STAND THE FIELD ALL ON THE SOUTHERN SHORE.
9TH VERSE
THEIRS ONE THING I WOULD LET YOU KNOW ERE I CONCLUDE MY SONG
A SPLENDID BAND OF MUSIC TO THIS REGT DOES BELONG
THEIR TUNES ARE SWEET AND PLAYED COMPLEET TIS CHARMING THEM TO HEAR
ON DRILLING GROUND THEY SWEETLY SOUND ALONG OUR FRONT AND REAR
10
THE NEXT DOES COME THE FIFES AND DRUMES THEY PLAY WITH MERRY GLEE
AS THEY ADVANCE OUR FRONT ALONG THEY MARCH MOST GALLANTLY
THEY PLAY BOTH SWETT AND MERRILY AND KEEPS TO EQUAL TIME
THEY SOME TIMES PLAY US DIXIES LAND AND BONNY CROSSED THE RHINE
11
NOW BROTHER SOLDIERS I DO FEEL MY RHYME IS AT AN END
I HOPE EACH GALLANT SOLDIER WILL THE STARS AND STRIPES DEFEND
AND WHEN THIS WAR IS AT AND END IF EVER WE GET HOME
I HOPE THE GALLANT FORTY-EIGHT WILL ADD ANOTHER SONG. END
Posted by John David Hoptak at 6:14 AM 1 comment: