Last week, I posted on the great fortune it was to meet Bill Denzter and his sister Ardith, and spend the afternoon with them at Antietam. Their great-great uncles both served in the 48th PA, and both paid their last full measure of devotion to the United States.
Bill Dentzer is a blogger of note and has just recently posted his thoughts on the visit as well as some more photographs and some video clips of yours truly explaining the role of the 48th at Antietam.
Click here to read Bill Dentzer's post.
Posted by John David Hoptak at 7:40 PM No comments:

Today, I was brought to tears.
My lifelong fascination with the 48th Pennsylvania is certainly no secret; indeed, for as long as I can remember, I have studied this regiment. As a lifelong student of the Civil War and a native of Schuylkill County, I early on developed a strong and sometimes indescribable connection with this particular regiment and the guys who served therein. All throughout high school, when I was in college, and continuing until this day, I have enjoyed wandering about Schuylkill County cemeteries and paying my respects to those served in the 48th. I am at the point now where I think I know just about where every 48th veteran in Schuylkill County lay buried.
For many years, I have been drawn, for whatever reason, to the graves of George and John Dentzer, who served in the 48th's Company K, recruited from southern Schuylkill County. The brothers both lost their lives in the war, and today lie buried side-by-side in Cressona. I remember standing at their graves, wondering what their deaths meant to their family and wondering, more personally, what these fellows looked like, thinking I would never know. . . 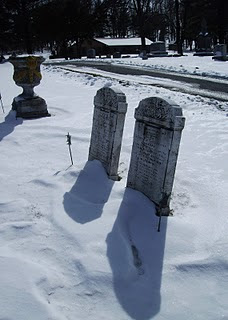 The snow-covered graves of John & George Dentzer in Cressona
Today, around 2:00 p.m., my colleague Ranger Schmidt found me in the Visitor Center office, and told me I needed to come immediately to the desk. As I approached, I saw our volunteer Brad talking with a couple of visitors, looking over a piece a paper, upon which I noticed copies of Civil War soldier photographs.
As I came up to have a closer look myself and saw the names under the photos, my jaw dropped wide open, and I could not help my eyes from instantly swelling up, for there, for the first time, I saw the Dentzer Brothers--George and John.
It took a few seconds before I was able to compose myself and find the right words. The couple was a brother and sister, direct descendants of George & John's older brother, Henry. The photographs of the soldiers remained in the family for generations, and they were kind enough to provide me with the copies and had no objection to my posting them here.
I stole away with the Dentzer siblings to the Burnside Bridge, and together we hiked the ground over which the 48th fought, me trying my best to describe the action, while at the same time being so caught up in the moment. We hiked a little along the Final Attack Trail and came to the Otto Farm. I pointed out the area where the 48th fought back A.P. Hill's Confederates that deadly afternoon, and to the best of my ability point out the general area where Private George Dentzer would have fallen, killed in action. He was one of eight soldiers of the 48th killed that Wednesday afternoon.

Private George Dentzer, Company K, 48th Pennsylvania
Killed in Action at Antietam
George, as well as his brother John, was a first-generation American, born sometime around 1836-1837. The same year, by the way, the Burnside Bridge was constructed. His parents emigrated from Germany to America and settled first in Pottsville, where George's older brother Henry would later serve as chief brewmaster at the Yuengling Brewery. In October 1861, George enlisted as a private in Company K, 48th Pennsylvania. He stood 5'8 1/2", had a dark complexion, grey eyes, and dark hair. He listed his occupation as Railroader and his hometown as Cressona, just a few short miles south of Pottsville. On the fields of Antietam, George met his demise. I learned today that his mother, along with older brother Henry, traveled to the battlefield in the weeks that followed to retrieve his body. He was buried in Cressona after a fitting memorial service during which Psalm 55:18 was read. . .He hath delivered my soul in peace from the battle that was against me: for there were many with me.
Four months later, in January 1863, George's younger brother John entered the 48th, enlisting as a private in Company K. He twice before tried to sign up, but was turned away both times on account of his age, he simply too young to fight. Regardless, he succeeded in his third attempt and his age listed on the muster roll was given as 27, no doubt a fabrication. John, who was shorter than his brother, stood 5'4" in height and labored along the Schuylkill Canal, which passed through Cressona. He served with the 48th throughout some of the war's toughest fights, at the Wilderness and Spotsylvania in May 1864, through Cold Harbor, where he fell wounded. He proved an admirable soldier, for he was advanced to the rank of corporal. Along with the rest of the Army of the Potomac, the 48th settled in during the siege of Petersburg, almost winning the war with their tunneling of the Petersburg Mine.
On December 28, 1864, just a few days after Christmas, young John was sitting in his tent in Fort Sedgwick, which the troops dubbed Fort Hell. The regiment had long become accustomed to Confederate shells exploding within the network of trenches and traverses that comprised the fort, but on that day, a shell struck John Dentzer's tent, and he was killed instantly. For the Dentzer family, they had lost another son. Like his brother George, who had already laid at rest for more than two years, John's body was brought home to Cressona, where he was buried.
Corporal John Dentzer, Co. K, 48th Pennsylvania
Killed in Action at Petersburg, December 28, 1864
It was an extraordinary day. . .another extraordinary day. Just a few weeks back, I posted on Sergeant Hugh Koch, whose descendant very generously provided me with a copy of Koch's photograph after one of my battlefield tours, which I then uploaded here. I remember then saying how incredible it was, not knowing that just a few weeks later, I would be walking over the same ground as George Dentzer, to the spot where he fell at Antietam, with his descendants. I cannot thank the Dentzer siblings enough, for so generously sharing their stories. As I told them, today is a day I will long remember at Antietam.
There will be more to follow on this. . .
Posted by John David Hoptak at 7:56 PM 7 comments: