Burnside's Troops Making Their Way To Shore
* * * * * * * * * * * * * * * * * * * * *
Following his capture of Roanoke Island, Ambrose Burnside next set his sights on New Bern, an important rail hub and Confederate supply line situated along the Neuse River. The Confederate defenses there were woefully undermanned and, after landing his troops on March 13, Burnside ordered an attack the following morning. Through a dense fog, Burnside's men advanced, led by some soon-to-be familiar names in the Union's Ninth Army Corps: Reno, Parke, and Rodman. After a fierce fight, the Confederate line, commanded by Brigadier General Lawrence O'Bryan Branch was sent reeling and Burnside emerged victorious; the Union would hold New Bern for the rest of the war. The cost of the March 14, 1862, Battle at New Bern was high: Branch lost 64 killed, 101 wounded, and more than 400 missing/captured. Union losses amounted to 90 killed, 380 wounded, and one man captured.

In the annals of the 48th Pennsylvania, New Bern was important, for it was there that they would see their first significant action of the war. . . .although its men never fired a shot! 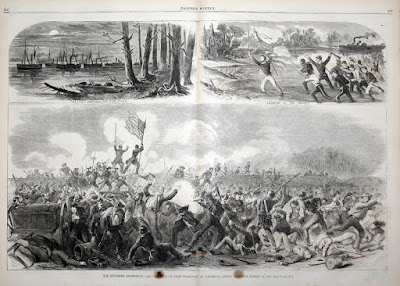 Scenes From Burnside's Victory At New Bern, From Harpers' Weekly
* * * * * * * * * * * * * * * * * * * * *
On March 11, 1862, Colonel James Nagle received an order from Burnside for six of his ten companies of the 48th Pennsylvania to depart Hatteras and accompany his expedition against New Bern. The soldiers had been encamped at Hatteras for several months, but they were now moving on. Said Oliver Bosbyshell of their time at Hatteras: it was a "fortunate circumstance; it became its school-house. Little versed in war, here, under the able command of that veteran disciplinarian, General Thomas Williams, it became well drilled and well disciplined, fitted for the stern career it was destined to pursue."

The six companies chosen for the assignment were A, B, C, D, H, and I; the other four remained for the moment at Hatteras, under the command of Captain William Winlack of Company E, a coal mine superintendent from Silver Creek. "The feeling amongst the four companies left behind was one of chagrin," said Bosbyshell. "Knowing that an engagement was pending, they desired to take part in it with the rest of the regiment, but only six could go, so four had to remain."

The designated companies set sail on the steamer Peabody on March 13, but it did not sail all the way to New Bern. "Toward evening rain commenced falling and the fog thickened so rapidly that it was decided unsafe to proceed further, so the anchor was dropped in the Neuse River, some seventeen miles below Newbern, and half a mile in rear of the rest of the fleet." The soldiers in the transports nearer to New Bern had already splashed ashore, with a sergeant of the 51st Pennsylvania planting a flag on the river banks early that morning of March 13. Driving back the Confederate skirmishers, Burnside's men advanced to within four miles of Branch's main line by nightfall. It was on the following, foggy morning that Burnside struck. "His troops felt the enthusiasm of their leader," recorded Bosbyshell, "and never dreamed of anything but victory. None doubted the result. . . .The confidence of the troops never faltered. The impetuosity of the attack, and the dread of Burnside's prestige by the enemy, were also powerful adjuncts to success. The rain and the fog aided in making uncertain the numbers of the assaulting party. The fight became terrible along the whole line."
While all of this was unfolding, the 48th Pennsylvania was wading its way to shore. On the morning of March 14, the Peabody carried the regiment upriver and anchored four miles north of the mouth of Slocum's Creek. The six companies, eager to enter the fray, hopped into small boats which paddled the wet soldiers through the fog to within fifty yards of shore. As they arrived, a request from General John Foster arrived: his men needed ammunition. The 48th was assigned the task of bringing it to the front.
"The landing of the ammunition was a difficult task, occasioning great delay. It was accomplished with as much dispatch as possible," said Bosbyshell. Company B loaded forty-thousands rounds onto the only wagon available while the men of the other five companies had the unfortunate task to carrying another forty-thousand on their backs. "To accomplish this task, the men took off their musket straps, and with them tied, or rather swung, the boxes on fence-rails, two men to one box. This was no light load," explained Bosbyshell, "A heavy knapsack, old Harpers Ferry musket, cartridge box containing sixty rounds, and the box containing one thousand rounds of ball cartridges swung on the rail, made many of the fellows groan." It did not help matters one bit that much of the way, the regiment trodded through ankle-deep mud.
On their way to the front, the 48th encountered a steady stream of Burnside's wounded men making their way rearward, cheering them on and telling the Pennsylvanians that the Rebs were on the run. Then, the tired men received word that the Confederates were in full retreat. "Such news inspired all with renewed vigor. The heavy load was almost forgotten. On pressed the men, and just as the gathering shades of night were deepening in the darkness the battlefield was reached."
For the six companies of the 48th Pennsylvania detailed for this assignment, carrying tens of thousands of rounds of ammunition miles through the mud would be their first real action of the war. And although they never once pulled a trigger during the Battle of New Bern, General Ambrose Burnside was so appreciative of the men's efforts that he ordered "New Bern" to be inscribed on the regimental flag.
The 48th Pennsylvania had earned its first battle honor.
Posted by John David Hoptak at 6:26 AM No comments: