It is really no big secret that I have an especially strong interest in the 9th Corps. And it's not just because the 48th Pennsylvania served in the corps from start to finish. The 9th Corps was seemingly everywhere throughout the war. . .from the shores of the Carolinas, to Virginia, to Maryland, to Kentucky, to Tennessee, Mississippi, and back to Virginia. Everywhere that is, except Gettysburg. It is remembered by many as the "wandering corps," and its' soldiers took pride in the fact that the dead of the 9th Corps lay buried in no less than seven states. I also enjoy studying the 9th Corps because I am a fan of the underdog. It seems as if the 9th Corps gets little respect in popular memory, its image tarnished because of its association with Ambrose Burnside. . .and because the corps did not fight at Gettysburg, it seems as if it is not as highly regarded as, say, the 2nd Corps, the "glory" boys of the Army of the Potomac who could do no wrong.
Oh, and the 9th Corps had the coolest of all corps badges: 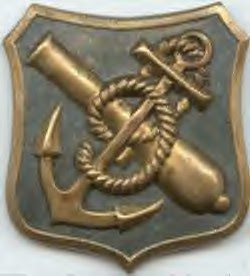 I also enjoy studying the lives of the Civil War's lesser-known figures, so today I thought I would combine the two and upload a brief biographical sketch of Brigadier General Thomas Welsh, an overlooked soldier in an overlooked/underappreciated corps. . .Special emphasis is placed on Welsh's role at Antietam. 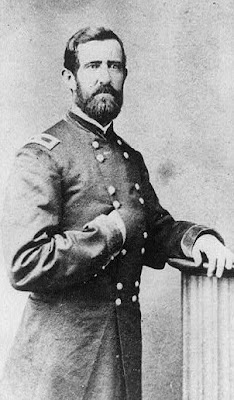 A leading citizen of Columbia, Pennsylvania, Thomas Welsh twice left civilian life behind to tender his services to the United States in its times of need, first in its war with Mexico, and then in its war with itself. Personally brave, Welsh proved himself to be a hard fighter and competent officer in both of these wars, who survived a grievous wound at the 1847 battle of Buena Vista only to succumb to malaria during the Civil War. Born and raised in Columbia, Welsh found work as a canal boat operator and then entered the lumber business before volunteering as a private in the 2nd Kentucky Infantry upon the outbreak of war with Mexico. Quickly promoted to the rank of sergeant, Welsh survived his wound at Buena Vista and was later commissioned as a 2nd lieutenant in the 11th United States Infantry. After being mustered out of the service in August 1848, Welsh returned to Columbia where he entered upon a lucrative career as a merchant. In the years before the Civil War, he also served his community as a justice of the peace.
When civil war erupted with the firing on Fort Sumter in April 1861, Welsh quickly organized a company of three-month volunteers. Entering the service as captain of this company, which was attached to the 11th Pennsylvania Volunteer Infantry, Welsh was made lieutenant-colonel of the regiment, no doubt owing to his service in the war with Mexico and his standing in the community. After the expiration of his three-month term of service, during which time he had served under General Robert Patterson in that officer’s ill-fated campaign in the Shenandoah Valley, Welsh helped raise the 45th Pennsylvania, a three-year regiment. Reentering service as colonel of this regiment in October 1861, Welsh and his men were initially attached to Horatio Wright’s division and assigned to duty along the South Carolina coast before being transferred to Virginia in the summer of 1862. On August 3, Colonel Welsh was made commander of the 2nd Brigade of the 9th Corps’s First Division, commanded during the Maryland Campaign by Orlando Willcox.
During the late morning hours of September 17, 1862, while Sam Sturgis’s brigades battled their way across the Lower Bridge, Welsh and his men were held in reserve. After the bridge was finally carried, Welsh’s Brigade—consisting of the 45th & 100th Pennsylvania, the 8th Michigan, and the 46th New York—crossed the Antietam with Willcox’s other brigade under the command of Benjamin Christ. Welsh’s Brigade formed into line on the left of Christ’s Brigade, with its own left loosely aligned with the right flank of Harrison Fairchild’s Brigade of Rodman’s Division. Some two hours passed before the Ninth Corps line, stretching one mile in length, was finally ready to advance. Welsh’s men pushed slowly but steadily forward, over undulating ground and in the face of Confederate sharpshooters positioned behind haystacks and the outbuildings on the Otto Farm. Heavy cannon fire, raking Welsh’s men from the heights to their front and left, also hindered their advance. Citing lack of support of both his flanks, Welsh ordered his men to halt. Confederate troops to Welsh’s front were by this time streaming through the streets of Sharpsburg. For a few moments it seemed as if one more united and determined push by Willcox’s Division might break the tenuous Confederate line and block Lee’s only line of retreat. A.P. Hill’s attack against Rodman’s exposed left flank, however, put an end to any possibility of such an attack. With the collapse of Ninth Corps’s left, Welsh and his men were ordered to fall back to a position near the bridge, and here they stayed until relieved the following morning by George Morell’s Fifth Corps troops. For their efforts, Welsh’s Brigade lost 94 men killed, wounded, or missing.
Two and a half months after the battle of Antietam, on November 29, 1862, Welsh was promoted to brigadier general of volunteers. With the reorganization of the Army of the Potomac before the Fredericksburg Campaign, however, Welsh found himself back in command of the 45th Pennsylvania, his rank notwithstanding. Following the Union debacle at Fredericksburg, Welsh was transferred west with General Burnside and was again placed in brigade command. Just a few weeks later, Welsh assumed command of the Ninth Corps’s First Division, which he led during the siege of Vicksburg, Mississippi. Sadly, Welsh did not have long to live after the surrender of that city. On August 6, 1863, he fell seriously ill with chills and a high fever. Taken by steamer to Cairo, Illinois, Welsh remained on board until a suitable railroad car could be found to transfer him to Cincinnati. Finally arriving there some eight days later, Welsh was taken to a private residence where he died the same day. The thirty-nine-year-old citizen-soldier was the victim of malarial fever. Disease, the number one killer of Civil War soldiers, knew no rank. Welsh’s remains were transported back to his hometown of Columbia, Pennsylvania, for burial in the Mount Bethel Cemetery.

Posted by John David Hoptak at 6:46 AM

Great opening page on Brigadier General Welsh. As a member of the 45th PVI Co. K (reenactors)it is nice to see that we are not the only ones who think highly of him.
Company K was raised on 2nd Street in Columbia, "the Col" is buried in Columbia also and we fire a salute at his grave site when we can get permission.

Thank you for sharing your knowledge of my GGGrandfather. I'm privledged to carry his name. I;ve seen his grave, pictures of his statue, etc..

I am interested in locating more information about the Welsh family from Columbia PA. Many historical accounts mention that the Welsh family had a long history in Columbia, but it seems all the attention went to the General and little is known about his family history. If anyone has any leads please let me know, tw78911sc@yahoo.com, Thx Tom Welsh