"Hail to the Chiefs!" Presidents at Antietam 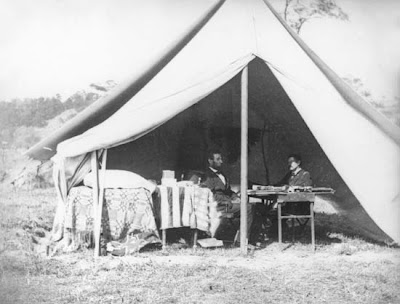 President Lincoln Meets With General McClellan on the Antietam Battlefield
* * * * * * * * * *
There is a strong presidential connection to the Antietam Battlefield. . .In addition to future president William McKinley serving as a commissary sergeant in the 23rd Ohio during the battle itself, no less than eight sitting presidents have visited the Antietam battlefield.
The first, of course, was Abraham Lincoln, who spent four days travelling over the field in early October 1862, just two weeks after the guns fell silent. He met with McClellan, trying to prod his young Napoleon into action, met with other generals, and with thousands of wounded soldiers. . .both Union and Confederate. His trip was well-documented, and the photos of his visit are among the most famous of the entire war. Oh, and who can forget the 26-minute long film, "Antietam Visit," which details Lincoln's famous visit and shows on the half hour at the Antietam National Battlefield's Visitor Center? 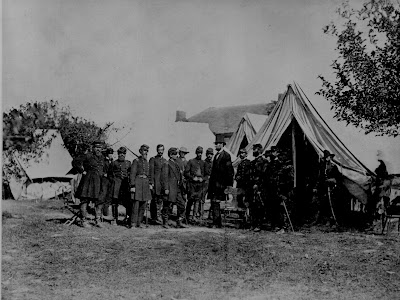 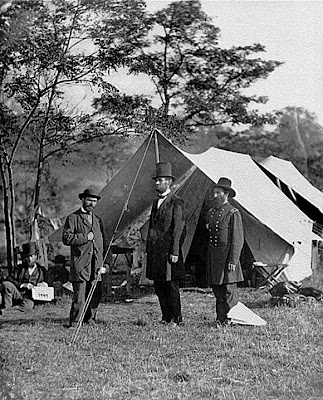 Lincoln's successor to the presidency, Andrew Johnson, was the next to pay a visit to the Antietam Battlefield. While the Radical Republicans in Congress were doing everything in their power to impeach him, Johnson journeyed out on September 17, 1867--the five year anniversary of the battle--to deliver an address at the dedication of the National Cemetery. 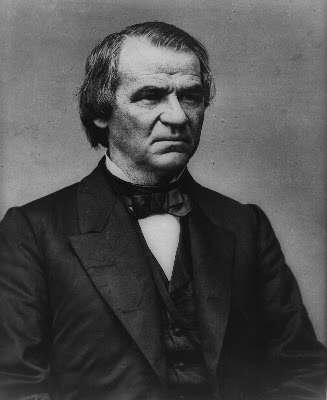 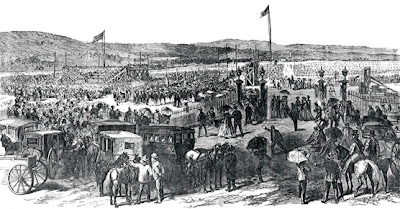 Dedication of the National Cemetery at Antietam (NPS)

While certainly not as famous or as eloquent as Lincoln's 1863 cemetery address at Gettysburg, Johnson's was at times stirring. . ."When we look at yon battlefield, I think of the brave men who fell in the fierce struggle of battle, and who sleep silent in their graves. Yes, many of them sleep in silence and peace within this beautiful enclosure after the earnest conflict has ceased."

Accompanying President Johnson that day was the general-in-chief of the United States Army, Ulysses S. Grant. Apparently Grant didn't get to see enough of the battlefield with Johnson, so he returned two years later. . .when he was president. 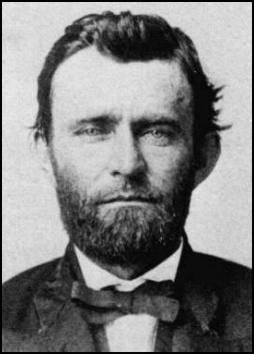 Ulysses Grant, 18th President of the United States, was the third sitting president in a row to visit Antietam

Grant toured the battlefield on October 15, 1869, with his good friend William T. Sherman. I can just imagine the conversation: "Boy, if I were here, Cump, I would have pitched right in!"

The trend of presidents visiting Antietam stopped for a while after Grant. . .no Rutherford B. Hayes, no James Garfield nor Chester Arthur, not even Grover Cleveland or Benjamin Harrison. But then, William McKinley made a return visit.

Perhaps no other president--save for Lincoln--is as closely associated with the Antietam battlefield than William McKinley. He served at Antietam as a sergeant in Company E, 23rd Ohio Infantry, the so-called President's Regiment. Just three days before Antietam at the battle of South Mountain, McKinley's regimental commander, Lieutenant Colonel Rutherford B. Hayes, had his left arm shattered by a musket ball and was forced to relinquish command. As a 19-year-old commissary, McKinley kept the boys of the regimental well-fed, even while on the firing line. After the war, he served for many years in the U.S. House of Representatives, then as a two-term governor of Ohio before being elected president of the United States in 1896 and 1900.

President McKinley returned to the Antietam battlefield on May 30, 1900--Memorial Day--to deliver an address at the unveiling of the Maryland State Monument. Interestingly, among McKinley's guest of honors were Mr. and Mrs. James Longstreet. 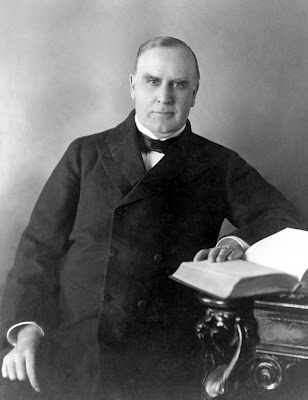 Having survived the Civil War unscathed, McKinley was struck down by an assassin's bullet in September 1901, in Buffalo, New York. He died on September 14, thirty-nine years to the day after his former commander Rutherford Hayes fell wounded at South Mountain. . .(I know, I know, the connection is a stretch, but still interesting). 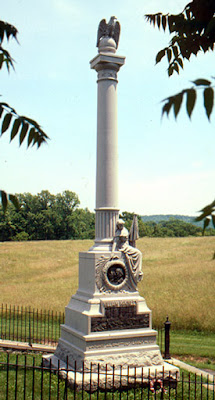 In 1904, the McKinley Monument, which stands near the Burnside Bridge, was dedicated in memory of the slain president.

The next president to visit Antietam was McKinley's successor, the old Rough Rider himself, Theodore Roosevelt. Born in 1858, Teddy was too young to serve in the Civil War, but he did vividly remember watching the Lincoln Funeral cortege make its way through the streets of New York from his parents' bedroom window in May 1865. He visited the battlefield on September 17, 1903, to deliver a speech at the dedication of New Jersey's state monuments. 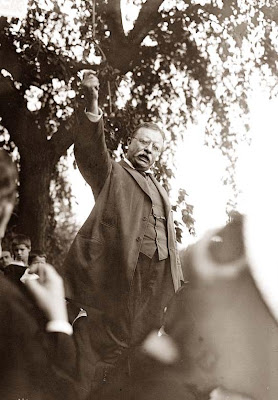 Once again, following Teddy's visit a number of years passed before another presidential trip to the Antietam battlefield. In fact, it wasn't until 1937. On the 75th Anniversary of the battle, President Franklin Delano Roosevelt delivered an eloquent address to an estimated crowd of some 50,000, and even spent some time shaking hands with a few Civil War veterans. 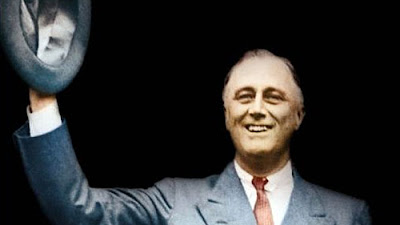 Only two presidents have visited Antietam since FDR in 1944. . .John F. Kennedy and Jimmy Carter. 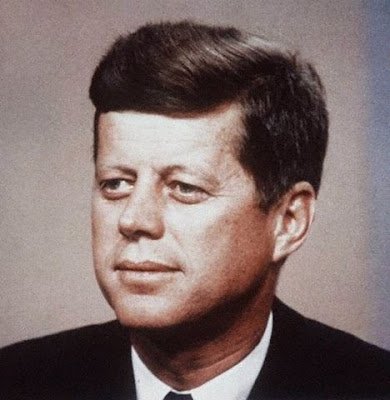 Kennedy toured the battlefield with his wife Jackie and brother Ted on April 3, 1963, just seven months before his fateful ride in Dallas. . . 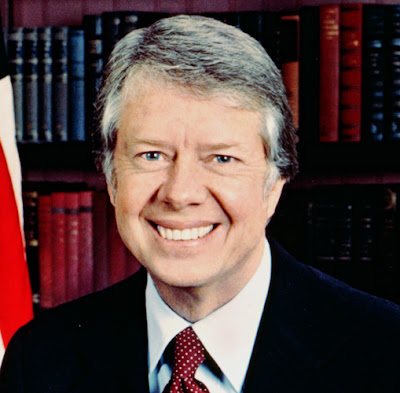 Jimmy Carter was the eighth--and last--sitting president to visit the Antietam battlefield. He did so with his wife Rosalynn and esteemed historian Shelby Foote in July 1978. The story goes that as the presidential motorcade made its way from Harper's Ferry up Maryland Route 230, it was stopped for the more than 20 minutes by a herd of cattle crossing the road. . .

Thirty years have past since the last time a president visited the battlefield. Perhaps this is understandable since of the eight presidents who have done so, four of them--Lincoln, McKinley, Franklin Roosevelt, and Kennedy, did not survive their term of office!

I would be a bit reluctant myself. . .
Posted by John David Hoptak at 1:18 PM