Getting To Know. . .Eliakim Parker Scammon 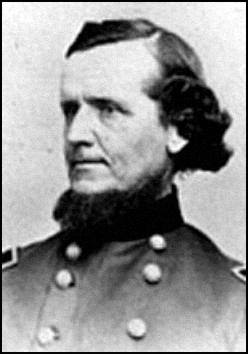 I'm willing to bet not many out there in the Civil War community are readily familiar with Union general Eliakim Parker Scammon. . .the cool name notwithstanding. So let's take the time to get to know this rather obscure officer.
* * * * * * * * * * * * * * * * * * * *
Educated at West Point, Colonel Eliakim Scammon seemed to enjoy more success as a scholar in the classroom than as a commander on the field of battle. Born in Whitefield, Maine in 1816, Scammon graduated from the United States Military Academy in 1837, ranking ninth in a class of fifty graduates. Among Scammon’s classmates in the illustrious Class of 1837 were future Civil War Generals Braxton Bragg, Jubal Early, John Pemberton, John Sedgwick, and Joseph Hooker. He entered the artillery upon his graduation, but one year later was transferred to the corps of Topographical Engineers. Scammon served against the Seminoles in Florida, then, as a first lieutenant, saw action in the Mexican-American War as a member of General Winfield Scott’s staff, serving alongside Robert E. Lee and George B. McClellan. Following the signing of the Treaty of Guadalupe-Hidalgo, which ended the war with Mexico in 1848, Scammon performed surveying duties along the northern lakes. In 1855, he was promoted to captain and the following year, was sent to the New Mexico Territory to help map and construct roadways. However, on June 4, 1856, Scammon was dismissed from the service for disobedience of orders and for “Conduct to the Prejudice of Good Order and Military Discipline.” Apparently unconcerned with his dismissal, Scammon began his career in education later that same year when he accepted a professorship at St. Mary’s College in Ohio. After teaching here for two years, Scammon then became president of Cincinnati College, a position he held until the outbreak of the Civil War in 1861.
On June 14, 1861, a little more than five years after being forced out of the army, Scammon was named commander of the 23rd Ohio Volunteers, a unit known to history as the “President’s Regiment,” for in its ranks served a young Rutherford Hayes and a young William McKinley. The 23rd was assigned to what became known as the Kanawha Division, which initially served in the mountains of western Virginia. Scammon must have impressed his superiors, for in the fall of 1861 the forty-five-year-old professor was given brigade command. In the spring of 1862, the Kanawha Division, under the command of General Jacob Cox, was transferred to John Pope’s Army of Virginia, and then, in the early September reorganization of the Army of the Potomac, was attached to the 9th Corps. Scammon’s brigade was heavily engaged at South Mountain on September 14, 1862. During this battle, Lieutenant Colonel Hayes, leading Scammon’s 23rd Ohio, fell grievously wounded, and General Jesse Reno, commanding the 9th Corps, was killed. Command of the Ninth Corps devolved upon General Jacob Cox upon Reno’s death. Succeeding Cox in command of the Kanawha Division was Colonel Scammon, the division’s senior brigadier. Scammon thus held divisional command for less than three days before the battle of Antietam.
Although Scammon held command of the Ninth Corps’s Kanawha Division, his role at the battle of Antietam was minimal as he was left, essentially, without a command. His first brigade, under Colonel Hugh Ewing was attached to Isaac Rodman’s Division, which crossed Snavely’s Ford and supported the advance of Rodman’s two brigades during its attack on the afternoon of September 17. Scammon’s second brigade, under Colonel George Crook, made an aborted attack against the Lower, or Burnside’s Bridge, and later supported General Willcox’s Division in its advance toward Sharpsburg. The two brigades were thus separated. Total casualties in Scammon’s Kanawha Division at Antietam numbered 255, a figure that included 37 killed, 191 wounded, and 27 missing.
Despite his limited role at Antietam, Scammon was promoted to brigadier general of volunteers less than one month later, but was soon detached from the Army of the Potomac with the rest of the Kanawha Division and sent back to the mountains of western Virginia. Here Scammon served as both the commander of the Subdistrict of the Kanawha in the Department of the Ohio, and as the commander of the 1st Brigade in the Kanawha Division. In the early spring of 1863, he was once again given divisional command in this department. On February 3, 1864, Scammon was captured by Confederate guerillas while sleeping onboard on the SS Levi, a steamer that was anchored in the Kanawha River near Red House Shoals, West Virginia. Scammon was held as a prisoner of war for six months until exchanged on August 3, 1864. Upon his exchange, it was evident that Scammon’s health had greatly deteriorated during his months of imprisonment. In an effort to restore his well-being, Scammon was sent to South Carolina where, in October, he took command of the Northern District, Department of the South. Remarkably, a little more than two weeks after his arrival here, the hard-luck Scammon was once again taken prisoner. His time in confinement this time, however, lasted just five days. After his second exchange from a Confederate prison camp, Scammon was sent further south, where he served out the duration of the war as commander of the District of Florida, in the Department of the South.
Eliakim Scammon was mustered out of United States service on August 24, 1865. After the war, Scammon continued to serve his country, but this time in a diplomatic role. In 1866, he was made U.S. Consul to Prince Edward Island in Canada, a position he held for four years. Scammon then settled in New Jersey, where, in 1875, he once again entered the academic world, becoming a professor of mathematics at Seton Hall College. Retiring ten years later, Scammon spent the final years of his life in New York City. On December 7, 1894, ten days shy of his seventy-eighth birthday, Scammon succumbed to cancer. His remains were laid to rest in Long Island’s Cavalry Cemetery.
Posted by John David Hoptak at 9:29 AM

I have just read your book, The Battle of South Mountain. Excellent! I was particularly excited to read this comment on p. 46, "Local farmer John Miller guided Scammon's march along the loop road..." I believe that John Miller was my 3rd-great-grandfather. Do you possibly have any more information on him that you could share?