"They Gave Us A Volley, And Their Peculiar Yell. . .:" The 48th Pennsylvania at the Wilderness 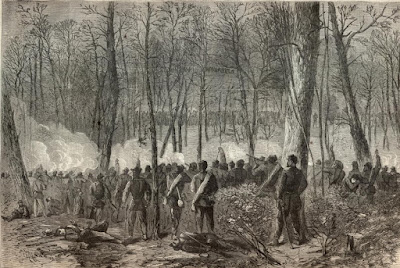 * * * * * * * * * * * * * * * * * * * * * *
Today, 145 years ago, witnessed the start of the confused, chaotic battle of the Wilderness and the commencement of the very bloody, savage Overland Campaign. Here are several accounts, penned by several participants, of the actions of the 48th Pennsylvania at the Wilderness:
* * * * * * * * * * * * * * * * * * * * *
Sergeant Joseph Gould: “On the way to the Wilderness the regiment crossed the Rapidan River on May 5th, and about two hundred veterans of the regiment were sent to the right of the army and deployed as skirmishers and fought the enemy as such nearly all day, losing some men killed and wounded. About five o’clock in the afternoon they rejoined the regiment, went into line of battle and became engaged just at dark.
“On the 7th but little hard fighting was done as we were moving about all day position. It was hard to determine just how our army was fronting and the lines running. Some troops were marching towards Fredericksburg on the left and others to Chancellorsville on the right. The woods were still burning from the effects of yesterday’s firing, and many of the wounded were burned to death ere they could be removed.”

Captain Joseph Hoskins: “After crossing the Rapidan, a detail of 200 men was made and put under my command: Lieut. Pollock, of G, and Lieut. Eveland, of A; Sergeant Al Huckey, of Company A, with a full complement of non-commissioned officers. The names of all but a few have escaped my memory. I recall Bob Reid and Clay Evans, Sandy Govan, David Thiel, and Adam Hendley. We left the regiment and moved to our right, and in a very short time came into contact with a line of the enemy’s skirmishers; they gave us a volley and their peculiar yell, expecting to start us on the back track; but, instead, we advanced and drove them out of the woods; and, on reaching the open field, we came to a halt. The enemy fell back to a rail fence, some fifty yards to our front, and there we held them until relieved by a Michigan regiment. We then moved to the rear and buried David Thiel, who had been killed in the advance. We then joined the main body of the regiment. Heavy firing was in progress all day, and on the 6th, the 9th Corps. . .was engaged almost the entire day in the Wilderness fight, under infantry fire, losing heavily.”

Captain Joseph Hoskins, Company F
* * * * * * * * * * * * * * * * * * * * *
Major Oliver Christian Bosbyshell: “The Forty-eighth crossed the Rapidan River at Germanna Ford, on the fifth of May, 1864, moving toward the Spotswood Tavern, where a bivouac was had. Very early on the morning of the sixth, the command, with the Second Brigade, in front, moved close to the Old Wilderness Tavern and on out the road to Parker’s Store. A half mile out this road, the Forty-eighth Pennsylvania were deployed as skirmishers to cover the flanks of the column. The enemy’s skirmishers were found about a half mile further on, and gave way before the advancing troops. A small stream was crossed, and three regiments of the Second Brigade formed line, advanced until the enemy was found on the opposite side of an open field, drawn up in considerable force, and supplied with a battery, stationed probably a quarter to a half a mile from the junction of the Parker store and Plank roads. A brisk fire was opened by the enemy from the battery as well as from the small arms of the infantry. The line was moved forward to the edge of the woods and the First Brigade formed to cover the left. The action was becoming quite brisk, and General Potter was preparing to charge the enemy, when he received an order to withdraw his command, move to the left, and attack on the right of General Hancock near the Plank road. This movement was made through a dense wood, almost impenetrable, owing to the tangled underbrush; the new line was formed as quickly as possible on Hancock’s right, and the attack made where it was utterly impossible to see anything from the thickness of the woods. The enemy was posted on the opposite side of a swampy ravine behind entrenchments. Sharp firing at very close range ensued, followed by a savage charge, which brought the boys into the enemy’s rifle pits in some places. Being unable to maintain the advantage gained, the troops fell back. Twice the charge was renewed—considerable ground was gained, but the enemy retained possession of their line.
The firing continued until dark; the brigade remained in the front line and entrenched its position. The Forty-eighth was thrown forward as skirmishers during the night, its line extending over a division front.”
Posted by John David Hoptak at 8:35 PM