I grew up watching Laurel & Hardy. Every Sunday morning, Fox 9 from New York would play two hours' worth of Laurel & Hardy shorts, which my parents taped each and every week. Twenty years or so later, I still watch them and I still laugh, even though I have by this point memorized the clips, the lines, the slapstick. Doesn't matter. To me, this stuff never gets old. 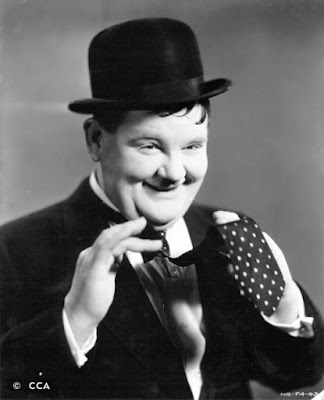 So, what does this have to do with the Civil War? Well, last week, Ranger Gamble told me that Oliver Hardy's dad fought at Antietam. Say what? So, I did a little research and, sure enough, within the ranks of Company K, 16th Georgia, was one Oliver Hardy, father of the comedy legend. Hardy, Sr., was born on December 5, 1844, in Columbia County, Georgia. He was only sixteen when the war broke out, but he nonetheless enlisted. During the Maryland Campaign, Hardy's regiment formed part of Howell Cobb's Brigade, Lafayette McLaws's Division, and was engaged at Crampton's Gap where, by the way, they battled Schuylkill County's 96th Pennsylvania Infantry, and at Antietam. It was at Antietam where Sergeant Hardy fell wounded, most likely in the Sunken Road, immediately east of the Hagerstown Pike. Hardy survived the wound and returned to Georgia where he served out the war as a recruiting officer. He married Mary Emily Norvell in 1890 and, two years later, the couple welcomed their son, Oliver Norvell Hardy, into the world. Sadly, Oliver, Sr. died ten months after his son's birth.
Next time you're at Antietam and touring the field, keep in mind Sgt. Hardy of the 16th Georgia. I can only imagine him lying wounded, looking up at Cobb and saying, "Well, here's another fine mess you've gotten me into."

Incredible to think had he not survived the war that we wouldnt have those Laurel & Hardy films to look back on and enjoy! Funny how one man's fate effects so many others.

John
Now that's an interesting thought. I bet you miss talking about old Sturgis and the 9th Corps. . .

Hardy's father was Capt. Oliver Hardy of the 16th Georgia Regiment, Company K, known as Ramsey's Volunteers. He was recruited by Capt. Joshua Boyd. He gave distinguished service but was seriously wounded in the Battle of Antietam (Sharpsburg)and served the rest of his military career as a recruiting officer. He was the son of a plantation and slave-owner and later owned a retail business and married a hotel manager in Madison. He was elected Tax Collector of Columbia County. He died when his son Norvell was 10 months old, and the Veterans placed a Black Cross - its highest award - on his grave in Harlem, Georgia.