"One Flag, One Country, Three Brothers," or, What They Fought For

In February 1864, the Baum Brothers--James, Charles, and Orlando--volunteered their services to fight for the Union. Although they hailed from Berks County, the brothers were mustered into service in Company D, 48th Pennsylvania, a regiment recruited almost entirely from neighboring Schuylkill County. James Baum was the eldest, at age twenty-one, and he was the only one of the three with combat experience. In August 1862, he enlisted as a private in Company H, 128th Pennsylvania, a nine-month organization that witnessed heavy action at Antietam and Chancellorsville. James's service record mentions that he was "Missing in Action" during the latter battle. As a member of Company D, 48th Pennsylvania, James attained the rank of corporal, perhaps because of his prior service. James's younger brothers--Charles and Orlando--were both eighteen years of age when they volunteered alongside James in February 1864. By occupation, James and Charles were both moulders; Orlando was a Confectionaire. All three survived the war, though Charles fell wounded at Cold Harbor on June 3, 1864, when a musket ball struck his left knee. Following a six-week recuperation in a field hospital, Charles returned to the 48th, to fight alongside his brothers until all three were mustered out of service on July 17, 1865.
* * * * * * * * * * * * * * * * * * * * *
The Baum Brothers were justly proud of their service. During the 1880s, Orlando began recording a history of their experiences and kept a collection of various papers, medals, and so on relating to his and his brothers' wartime service. Of special interest is a large postcard that features a color photograph of the 48th Pennsylvania's battleflags. 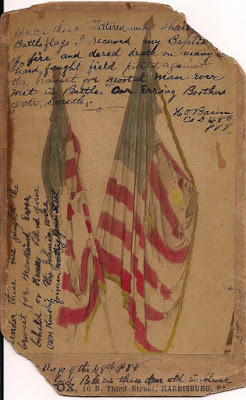 On the front of this postcard, Orlando recorded some of his thoughts. Although torn and ripped, enough of Orlando's writing remains, which shed great insight into the thoughts of this particular veteran. "Under these Tattered and shrivelled Battleflags I received my Baptism of fire and dared death on many a hard fought field pitted against the bravest foe mortal man ever met in Battle, 'Our Erring Brothers' of the South."
* * * * * * * * * * * * * * * * * * * * * 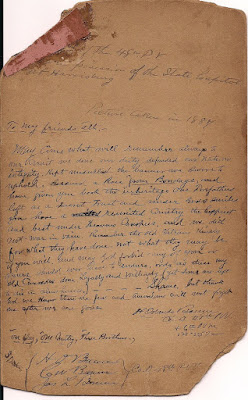 On the reverse side of the postcard, Orlando was much more reflective:
"To My Friends All--
May come what will remember always to our credit we done our duty, defended our Nation's integrity, kept unsullied the banner we swore to uphold, rescued a Race 'from Bondage,' and have given you back the 'inheritage [inheritance]' our Forefathers left as a sacred trust and under God's smiles [?] you have a reunited Country, the happiest and best under Heavens Canopies, and we did not war in vain. Remember the old Veterans kindly for what they have done, not what they may be, if you will, and may God forbid any of you or yours should ever have to endure, or do as these my old Comrades done Loyally and willingly (yet some are left to die in Almshouses)- - - -Shame. But thank God, we Hope, there are few and Americans will not forget us after we are gone."

At the bottom, Orlando inscribed, fittingly, "One Flag, One Country, Three Brothers." 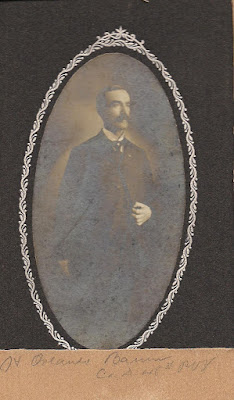 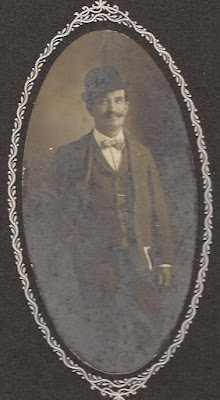