Busy does not even begin to describe it. Hectic is more like it, but crazy would do just fine. This is how the past six weeks have gone. But it seems as if the dust is (finally) starting to settle, and things are getting back to normal. Over the past month and a half, and in addition to losing a co-worker and my grandmother, and besides closing in on a new house, I have been keeping busy at work helping to develop a new Civil War Intelligence program for children along with my colleagues Ranger Christie and Ranger Mannie. Titled "Become A Civil War Scout," the program will soon become an activity for visiting school groups and consists of a series of activities designed to help teach students the various ways in which Civil War armies gathered information on the enemy. Mannie put his craftmanship to good use, creating a Civil War toy-soldier "army" as part of my activity titled "Count The Flags."

On another note, I am most pleased to announce that after a many decades-long absence and thanks to the generous contributions of donors from all across the United States, the missing sword has been replaced on the statue of Brigadier General James Nagle on the 48th Pennsylvania Monument at Antietam. The sword went up on Thursday, May 13, at 12:45 p.m., this time for good. I could not be happier with sculptor Mike Kraus's incredible work in creating this sword, an exact replica of the one presented to Nagle upon his return from Mexico in 1848 by the grateful people of Pottsville. 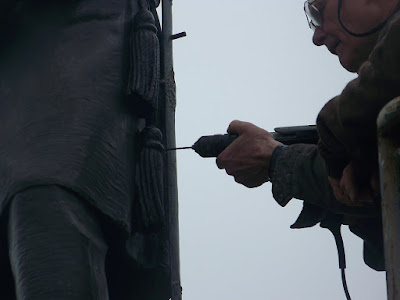 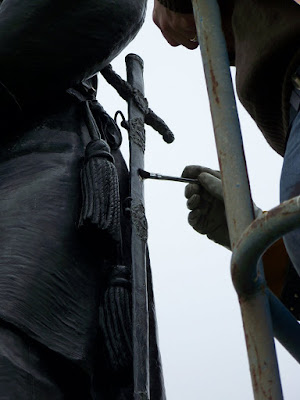 A rededication ceremony is planned for Saturday, May 29, 2010, at 11:00a.m. The event will be recorded, so, hopefully, I will be able to post it. Antietam scholar John Schildt will provide the invocation, followed by a welcoming address by Superintendent John Howard, and then Mike Kraus will discuss his efforts. I will conclude the ceremony by delivering the dedication address and then comes the unveiling. To all those who have helped bring this project to fruition, please accept my thanks and my appreciation. I began this undertaking on April 5, 2008, and estimated it would take two years. Sure enough, here we are in the spring of 2010, and the monument is restored. 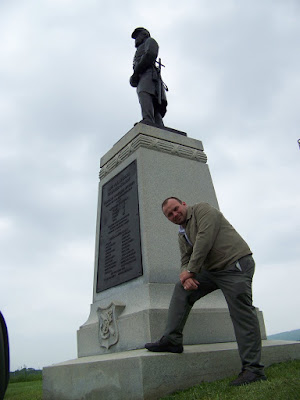 I will be posting more about this following the May 29 Rededication.


* * * * * * * * * * * * * * * * * * * * * * * * *
Also keeping me very busy is something to which I alluded in my previous post. . .and that is a new book project. Some of you guessed it correctly. Last Fall, my friend and fellow Civil War blogger/historian Eric Wittenberg put me in touch with Doug Bostick, editor of the History Press's Civil War Sesquicentennial Series. After some discussion about possible topics, Doug and I agreed on a South Mountain battle narrative. I completed the proposal, the History Press accepted it, and am happy to say that on March 13, I signed the contract. Since this time, I have been busy writin' and researchin', for I must have the manuscript submitted by December 15. The Crampton's Gap chapter is complete, and I am now buried deep in the Fox's Gap fight. I envision the book to run about 200 pages of text with a series of appendices, and well illustrated with photographs and maps. If all goes well, look for it around this time next year.

You are a very busy man John

Hey Jim
Long time, no see! I wouldn't have it any other way.
We are due for a Fox's Gap excursion. . .
Hope to see you at the Park soon.

South Mountain? Alright, John you are the MAN!