Throughout the four years of the American Civil War, more than two million soldiers served in Union blue, some for a few weeks, others for the duration.

With the Sesquicentennial upon us—or almost upon us—my attention is now drawn to those first volunteers of the Union: Pennsylvania’s First Defenders.

In the wake of Fort Sumter, President Lincoln issued a call for 75,000 men to serve for a period of three months. Thousands turned out to answer the call, and on April 18, just 72 hours after Lincoln’s call, the first of these thousands reached Washington. Arriving around 7:00 p.m. that evening, were some 475 Pennsylvanians composing the ranks of five militia companies from Schuylkill, Lehigh, Berks, and Mifflin counties, 475 volunteer soldiers who thus go down in the history books as the First Defenders.
Most of these men spent their three month term of service in the defenses of Washington after being more formally organized into the ranks of the 25th Pennsylvania Infantry. When mustered out in July 1861, most would re-enlist in regiments formed that summer, to serve for three years, or the course of the war.

* * * * * * * * * * * * * * * *
Over the next several weeks, as we make our way toward the 150th Anniversary of the Firing on Fort Sumter and the inauguration of America's Civil War, I will be posting histories of these five First Defender companies, along with rosters, photographs, stories, and so on.
Up first, a brief history and the roster of Pottsville's National Light Infantry.
The National Light Infantry was formed in 1831, making it the oldest of the First Defenders companies, although its organization was not regularly maintained in those thirty years prior to the war. However, throughout the 1850s, and with war clouds building, interest in the militia company grew. To many of the soldiers comprising the ranks of the National Light Infantry, the war did indeed seem an "irrepressible conflict," in the words of New York Senator William Seward. Thus, on the evening of April 11, 1861, literally just hours before that first fateful shot hundreds of miles away at Sumter, the officers of the National Light Infantry met in Pottsville and drafted a series of resolutions. One of these resolutions was put forth by Corporal Henry Lutz Cake, who would later serve as colonel of the 96th Pennsylvania Infantry, which read:
On motion of Corporal H.L. Cake that the services of this company be tendered to the Secretary of War and the Governor of Pennsylvania in defense of the Union, and that the company be ready to march at six hours' notice.
The motion accepted, a telegram was sent to Governor Andrew Curtin of Pennsylvania and Secretary of War Simon Cameron, making known the willingness of the National Light Infantry to serve, if needed. With that, the National Light Infantry became the very first company to offer its services to the government at the start of the Civil War. Cameron verified this when in 1866, he wrote the following note: 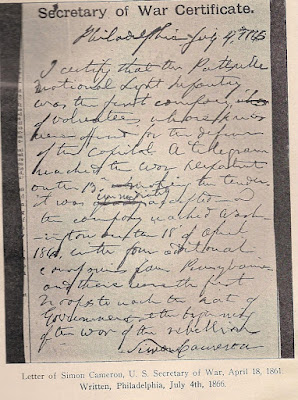 "I certify that the Pottsville National Light Infantry was the first company of volunteers whose services were offered for the defense of the Capital. A telegram reached the War Department on the 13th, notifying the tender. It was immediately accepted and the company reached Washington on the 18th of April, 1861, with four additional companies from Pennsylvania, and these were the first troops to reach the seat of government at the beginning of the war of the rebellion. ~Simon Cameron."

Their offer accepted, the National Light Infantry departed Pottsville on the afternoon of April 17, 1861, and headed for Harrisburg. With them traveled Pottsville's other militia company, the Washington Artillerists. The two companies, numbering around 230 men, arrived in the state capital that evening and on the following morning, were sworn into Federal service by Captain Seneca Simmons of the 7th U.S. Infantry. Their muster roll report is below, signed by Captain Simmons, who was later killed at Gaines's Mill in June 1862: 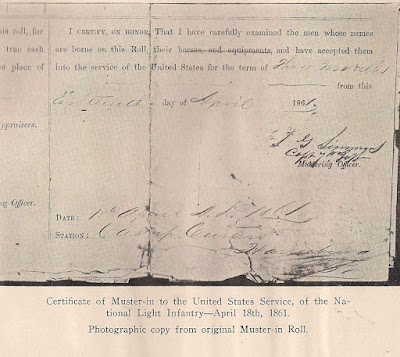 Hours after being sworn into U.S. service, the National Light Infantry, along with the Washington Artillerists, Logan Guards of Lewistown, Ringgold Light Artillery of Reading, and Allen Infantry of Allentown, boarded train cars and headed off to Washington. Forced to switch trains in Baltimore, the largely unarmed Pennsylvanians marched through the city and were subjected to the jeers and insults of a large crowd, nearly 2,500 strong, of vehement Confederate supporters. When they reached Camden Station, the mob hurled bricks, stones, bottles, and whatever else they could get their hands on, at the Pennsylvanians. Many of the projectiles hit their mark, thus the first blood shed in America's bloodiest war was shed by Pennsylvania's First Defenders.

At last the weary Pennsylvanians reached Washington around 7:00 p.m. that evening--April 18--and went into quarters in the halls and chambers of the U.S. Capitol Building. So thankful was he of the timely arrival of these Pennsylvanians, that President Lincoln traveled from the White House and shook the hand of each of the 475 men, including, of course, those of the National Light Infantry.

Below is the roster of the National Light Infantry when first sworn into service by Captain Seneca Simmons during the late morning hours of April 18, 1861. These men, along with those who comprised the ranks of the other First Defenders units, were the first of the more than two million soldiers who would volunteer and fight for the Union in the American Civil War. 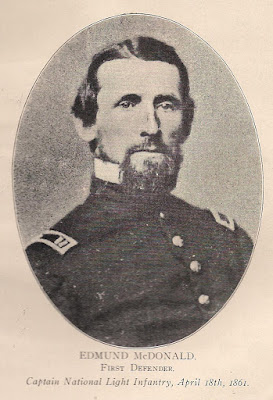 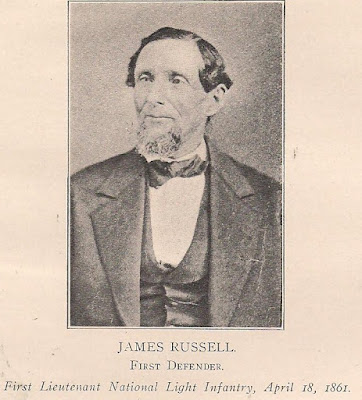 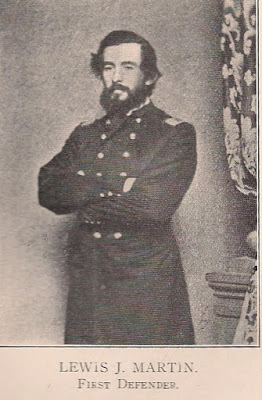 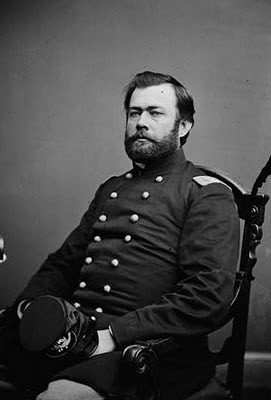 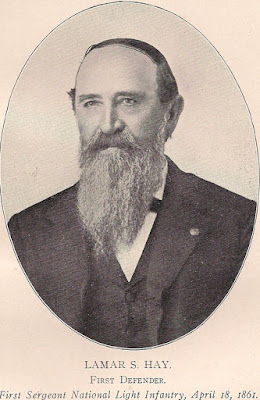 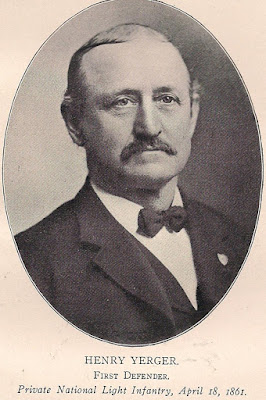 Wonderful tribute, John, to the National Light Infantry. Nice to see good old Emmanuel Saylor's name in print on the roster! Will look forward to reading about the other companies.

Lamar S. Hay, member of the National Light Infantry, was my great, great, great grandfather. My family still has his (very tattered) First Defender's medal. Lamar Hay and his.son William went on to fight for the Union for many years. Tonight I showed my children this webpage with his photo after seeing photos of the National Gaurd protecting our Capital from more violence at the hands of the January 6 2021 insurrectionists. There is a striking similarity to his call to action as a citizen to defend our Capital in 1861 from secessionists and the current need for the National Guard to defend the Capital from insurrectionists. My children were excited and proud to see his photo.