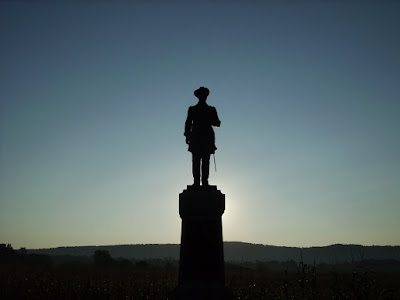 The 50th Pennsylvania Monument at Antietam at Daybreak

Just a brief interruption of my look at the 150th anniversary of the formation of the 48th Pennsylvania to announce the publication of a new book, The Civil War Letters and Experiences of Samuel Schwalm of the 50th Pennsylvania Volunteer Infantry Regiment, which includes an introduction written by Yours Truly. Published by the Pennsylvania-based Johannes Schwalm Historical Association, the book contains dozens of letters written by Samuel Schwalm, who enlisted in the summer of 1861 into what would become Company A, 50th Pennsylvania Infantry, a company recruited largely from northern and northwestern Schuylkill County. I was familiar with some of Schwalm's letters; copies of several are held at the Antietam Battlefield Library, which I used in my 2009 book Our Boys Did Nobly: Schuylkill County, Pennsylvania, Soldiers at the Battles of South Mountain and Antietam.

It was a great thrill and a great honor for me to have been asked to write the introduction for this new book. Several months back, Dr. Michael Gabriel of Kutztown University asked if I would be interested in penning the introduction. Because of my familiarity with the 50th, and because I was familiar with some of the Schwalm letters--and, of course, because the 50th fought in the Ninth Army Corps--I gladly accepted. My contribution to this book is a concise overview of the war service of the 50th Pennsylvania, which I titled "With Stripes Unmarred and Stars Undimmed," the words Colonel Benjamin Christ used to describe the promised condition of the regiment's flags upon their return from war.

More information on this book, including ordering information, can be found here.
Posted by John David Hoptak at 8:01 AM