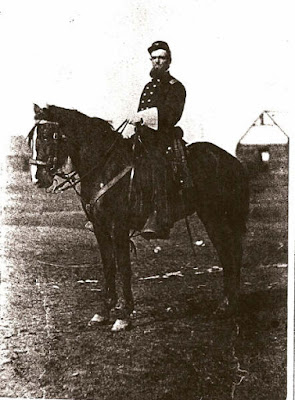 New Year's Day, 1862, found the 48th Pennsylvania encamped along the sandy shores of North Carolina. The men had been soldiers for just over three months and had yet to experience any combat; however, the year ahead--1862--would witness some of the hardest action of the war for these Schuylkill County volunteers, beginning with a supporting role at New Berne, but continuing at 2nd Bull Run (which proved the costliest battle of the war for the 48th), Chantilly, South Mountain, Antietam, and Fredericksburg. For scores of 48th Pennsylvania soldiers who welcomed in the New Year at either Fort Clark or Fort Hatteras in North Carolina, 1862 would be their last year; hundreds more would fall wounded or be debilitated by diseases in the months ahead.
The soldiers of Company B, commanded by Captain James Wren, welcomed in the New Year in ceremonial fashion; having received a flag as a gift from the citizens of Schuylkill County, they gathered to raise it over the ramparts of Fort Clark. The ceremony was recorded in the Miners' Journal for the people of the county:

"Company B of the 48th Regiment, Penna. Volunteers, being the recipients of a handsome flag, furnished them by your generosity, set apart New year's day to the hoisting of it upon Fort Clark, which pleasing ceremony was performed in the presence of Col. James Nagle, Major Daniel Nagle, the Chaplain of the Regiment, and the members of Company D amid a multitude of cheers and cries of 'long may it wave.' After the flag had been spread to the breeze, Col. Nagle and our worthy Captain made some appropriate remarks, which were attentively listened to, after which the Chaplain led in a patriotic prayer. The committee on resolutions then withdrew and formulated the following resolutions, which were unanimously adopted:
Resolved: That we, officers and men of Company 'B,' to offer our sincere thanks to the citizens of Schuylkill County for their extreme kindness in bestowing upon us such a beautiful emblem of our country.
Resolved: That the members of Co. 'B' in gratitude to the donors, do hereby repledge their word of honor, that they will ever be true to the Flag of Our Country, which has so ruthlessly been trampled upon by rebellious feet, in defense of which they will shed their lifeblood if necessary.
Resolved: That the members of Co. 'B' will make this flag the special object of their pride and care, so long as it shall remain in their power.
Resolved: That a copy of these resolutions be sent to the Miners' Journal for publication, through which medium our friends may be made acquainted with our doings, etc.