Sergeant Joseph Gould, Co. F:
"On the 11th of December a heavy artillery duel took place, and the troops on our side of the [Rappahannock] river were moving towards the bank ready to cross. Our brigade did not take any part in the movement until the 12th, when we crossed the river on a pontoon bridge opposite the city, and lay in the streets all that day and night. The shells from the enemy were exploding all around us while occupying this position, and quite a number of the regiment were disabled. On the 13th our brigade, now consisting of the 48th Pennsylvania, 2nd Maryland, 6th and 9th New Hampshire and 7th Rhode Island, was ordered to the assault at 2 p.m. Prior to this we had been in an exposed position, the right wing lying up one street northward and the left wing on another street eastward. Directly in front of the right wing was a large brick barn, behind which [division commander] Gen. Sturgis and staff were standing, until a solid shot came flying clean through the walls, scattering the bricks and debris in all directions, and with is scattered the general and his staff."
Sergeant William J. Wells, Co. F:
"Just prior to this incident, while General Sturgis was seated upon a camp stool and leaning against the barn, General Ferrero, commanding the 2nd Brigade of his division, came in from the front, much excited, and told Sturgis that his brigade was all cut up, and demanded to know why in the hell he did not send them reenforcements. Sturgis replied: 'Oh, I guess not, General, keep cool; take a little of this,' lifting the canteen to his lips. While so engaged, the shot came through the barn, just over his head, but he never lowered it until he had finished his drink; then, handing the canteen to Ferrero, he rose, went to the corner of the barn, looked over the field, and then said to Col. [Joshua] Sigfried [commanding the 48th], who was standing near, 'Now is your time, Colonel. Go in.'" 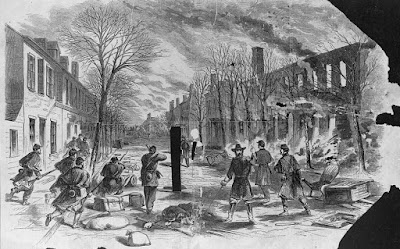 'Attention! Right face! Forward, march!' and the 48th moved quickly to the right, until the barn was uncovered, when the Colonel commanded: 'By the left flank; march,' and the regiment swung into line, rapidly marching to the front, then to the right, then again to the front, when we halted, the right companies finding themselves for a short time lying flat on their faces behind a frame house and a long pale fence, while grape and canister played a tattoo through the same. We had been carried too far to the right and could not advance farther to the front from that position. Up again, then to the left until the house was cleared, then by the front; forward, with a rush, into shelter under the brow of a slight elevation, when our advanced was impeded by a mass of men, many deep, seeking similar shelter. Here we stayed doing sharpshooting, picking off the officers and gunners from the batteries upon the heights until nightfall, when we were withdrawn under the cover of darkness."


"It has been truly said that only those who participated in the contest know much and how little they heard. We remember how the smoke, the woods, and the inequalities of the ground limited our vision when we had the leisure to look about us, and how every faculty was absorbed in our work; how the deafening noise made it impossible to hear orders; what ghastly sights we saw, as men fell near us, and how peacefully they sank to rest when a bullet reached a vital spot. [Sergeant August] Farrow and [Private David] Griffiths of Company F stood in the ranks to deliver their fire, though repeatedly commanded to lie down, until Griffiths was shot through the left lung and carried to the rear. Wounded men shrieked and others lay quiet; the singing and whistling of the balls from the muskets was incessant; and we knew very little of what was going on a hundred yards to the right or left. Participants in real fighting know how limited and confused are their recollections of the work, after it has become hot. All efforts to dislodge the enemy were unsuccessful, and the losses very heavy. Night put an end to the contest, and, having exhausted our ammunition, we were relieved by the 12th Rhode Island regiment and marched back to town. Cannon and musketry fire ceased their roar, and in a few moments the silence of death succeeded the stormy fury of the ten hours' battle. We were soon fast asleep in the streets of the town, tired out." 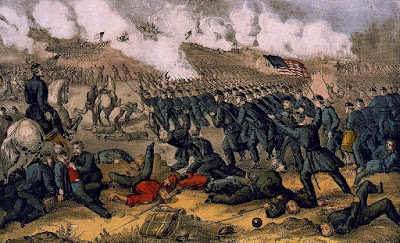 
"From 12:30 p.m. until 2:30 p.m., the 48th Pennsylvania Volunteers was held in reserve. It was the ordered to the front. The men marched under a most galling fire like true veterans. The whole of my brigade remained in the front until after sixty rounds of ammunition had been expended, and until they were relieved by other troops. . . ."


"We bivouacked in the street on the right of the city the preceding night; towards noon on the 13th marched toward the left and to the support of the 2nd Brigade of same Division. At one o'clock P.M., received orders from General Nagle to march to the open field in the rear of the city, when my regiment was kept in reserve (while the rest of our brigade marched forward) until half-past two o'clock, when General Sturgis ordered me to forward my command to assist in repelling a charge the enemy was about making on our line. We started and went at double-quick (a distance of half a mile) under a most terrific fire of shell, grape and cannister from the enemy's batteries. Arriving at the hill (about four hundred yards from the enemy's breastworks), I was requested by Colonel Clark, of the 21st Massachusetts Volunteers, to relieve his regiment; their ammunition was nearly expended; I did so; when we remained on the crest of the hill until our ammunition was exhausted (sixty rounds per man), when Colonel Brown, of the 12th Rhode Island Volunteers, relieved us. At dusk the hill became crowded, and seeing other regiments still coming up, Colonel Clark and myself concluded best to return to the city for ammunition, and give room for fresh troops to get under the shelter of the hill."Too much praise cannot be given to all the soldiers (and the following officers who were in the battle, viz: Lieut-Colonel Pleasants, Major J. Wren, Adjutant D.D. McGinnes, Captains U.A. Bast, G.W. Gowen, Winlack, Hoskings, O.C. Bosbyshell, J.A. Gilmour, John R. Porter, Isaac Brennan, and Lieutenants H. Boyer, Eveland, John Wood, Humes, Chas. Loeser, Jr., Bohannan, Fisher, James, Williams, Jackson, Pollock, A. Bowen, Schuck, Douty, and Stitzer), for their gallantry during the entire engagement. Their line was steady and unbroken while advancing under the most murderous shelling of the enemy, and their fire deliberate, well-aimed and effective.
"I deeply sympathize with the families and friends of those who have fallen, but it is a source of great gratification to know that they fell while gallantly defending a just and holy cause."
Posted by John David Hoptak at 4:45 AM