The 48th/150th: The Final Ten Days of May: From Spotsylvania to Totopotomy Creek. . .

On May 21, 1864, the soldiers of the 48th Pennsylvania left Spotsylvania behind, though the memories of the sanguine fields there would never drift far from the memories of those who survived the bloodshed.  The regiment turned left. . .and continued moving south; after nearly four weeks of unimaginable loss and steady, sustained, and heavy combat, General Grant decided to "keep moving on," attempting once more to place the Army of the Potomac between Lee's still fleet-footed but ever-dwindling Army of Northern Virginia and Richmond.

All through the day and all through the night of May 21, the weary, seasoned soldiers marched, with no doubt the memories of so many of their comrades left behind--buried in the Virginia soil--on their minds. The long march continued on May 22, the men under orders to "march fast." The following day, on May 23, the soldiers heard the sounds of yet another battle ahead, along the banks of the North Anna River. The fighting continued on May 24. That day, the blue-clad soldiers of the 48th crossed the river at Chesterfield Bridge and later assaulted the Confederate defensive lines, "but every attempt to dislodge them," said regimental historian Joseph Gould, "was futile." Oliver Bosbyshell noted that the regiment crossed the bridge under a "heavy artillery fire" then took up a position to the right of Gershom Mott's brigade, of General David Birney's Second Corps division. "A sharp skirmish" ensued, noted Bosbyshell, with "the line moving up well to the enemy." There, the regiment quickly built a strong line of entrenchments, something they had become quite expert at doing. Behind these entrenchments, the 48th continued sparring with Confederate soldiers--equally well-protected--on May 25.

Still more marching and more fighting lay ahead of 48th during the next few days. On May 26, Potter's Division of the 9th Corps moved forward once more. . and sustained heavy loss. In the moonlight, sometime between 9:00 and 10:00 o'clock, the regiment departed its line, turned around and back-tracked six miles. They then turned south once more, and continued marching all day on May 27, still trying to side-step around Lee's army. With little rest and little to eat, the 48th once more took up its line of march on May 28 when the regiment crossed the Pamunkey River. Resistance continued to build as the regiment continued its march south, heading onward toward Richmond. Lee was parrying every one of Grant's thrusts. A sharp little fight erupted on both May 30 and May 31, 1864, near the Totopotomy Creek, at a place called the Armstrong Farm. 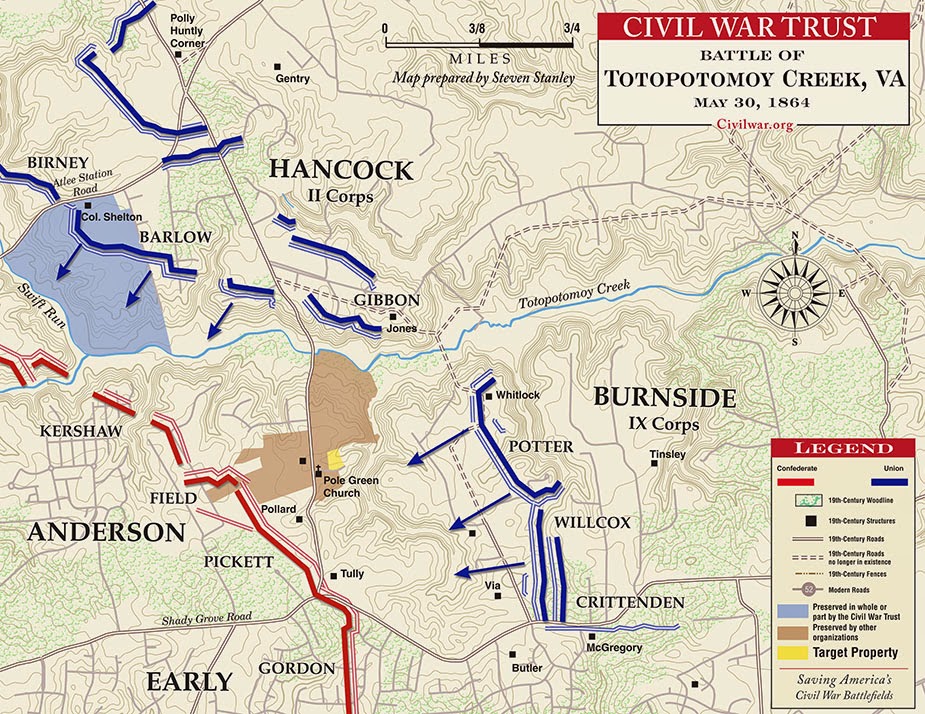 After crossing the Totopotomy, the 48th advanced and steadily drove back the Confederate skirmishers, all the way to their main line of defense. "This was, " boasted Bosbyshell, "a short, sharp skirmish most brilliantly executed." The push resumed on May 31 and the regiment advanced facross three-quarters of a mile of the "most difficult ground yet encountered." Just as it was the day before, the advance on that final day of May was well-made and well-executed but it was extremely costly, for it cost the regiment three of its best officers, all to Confederate sharpshooter bullets.

During the advance on that fateful May 31,1864, Lieutenant Samuel B. Laubenstein of Company H was shot and instantly killed. Laubenstein had served in the regiment since the summer of 1861 when he had enlisted at the age of 22. He stood 5'8 1/4" in height and was, by occupation, a clerk. He listed his residence as Pottsville, though his remains were sent back to what was, presumably, his family's home in Schuylkill Haven where they were laid to rest in the Union Cemetery.

Lieutenant William H. Hume was also quite young when he enlisted in the summer of 1861; just 20 years of age. Like Laubenstein, Hume was also a clerk, though he called St. Clair his home. He was shot in the arm during the advance on May 31. The wound may not have appeared dangerous but, as Oliver Bosbyshell recorded, "the trying work of the campaign had so reduced his system that he failed to recover from the shock of the wound" and he would succumb to this wound within a matter of days. Hume's body was sent back home to Schuylkill County for burial and they continue to rest today in the Odd Fellow's Cemetery in Pottsville. "These were good officers," reflected Bosbyshell, who "had proven themselves worthy on many fields of battle."


While the soldiers of Companies H and B mourned the loss of Laubenstein and Hume, the officers with whom they were most well-acquainted, the entire regiment was shocked and saddened by the loss of its major, Joseph A. Gilmour, who was, said Joseph Gould, "an excellent officer, quiet, unassuming, and as brave as man could be." He was, in short, " a perfect soldier." Oliver Bosbyshell echoed Gould's sentiments when he wrote that Gilmour was "beloved by all who knew his manly worth, one of the first men to offer his services to the government, and one who had from that hour given his entire time in the defense of the nation."

Born on June 30, 1834, in Nova Scotia, Joseph Gilmour was the son of Scottish parents who subsequently settled in Pottsville, Pennsylvania. With the outbreak of civil war in April 1861, Gilmour was quick to volunteer his service, and as a private in the Washington Artillery militia unit, entered the nation's capital less than one week after the firing on Fort Sumter. When Gilmour's three-month term of service expired in July 1861, he was selected by Colonel James Nagle to raise a company of infantry, which would form part of the 48th Pennsylvania Volunteers. On September 19, 1861, Gilmour was once again mustered into service, this time as the captain of Company H, 48th P.V.I. He was 27 years of age, and was among the tallest soldiers in the regiment at 5'11". His complexion was listed as dark; his eye color blue, and his hair gray. By occupation, Gilmour was a hatter. Gilmour served with the regiment from the start, rising to the rank of major in July 1863. It was 150 years ago, on that fateful May 31, 1864, and while nearly within sight of the spires and steeples of Richmond, Gilmour was shot in the left knee. It was a painful wound; the kneecap shattered. In a field hospital behind the lines, Surgeon Theodore Christ amputated Gilmour's left leg. From there, he was borne via wagon to White House, Va., then via steamer to the Seminary Hospital in Georgetown, D.C., where he breathed his last on June 9, 1864. Three days later, Gilmour's remains were buried in Pottsville's Presbyterian Cemetery and the occasion, said Bosbyshell, "was marked by a great outpouring of the people, who loved and honored the dead hero."


Francis Wallace, in his tribute to soldiers from Schuylkill County, recorded that Gilmour lay his "bright life on the altar of his country--a martyr to the cause nearest and dearest to his generous heart." A First Defender with the Washington Artillery, Gilmour subsequently led Company H of the 48th at Newbern, 2nd Bull Run, Antietam and during the siege of Knoxville, while at the rank of major, he commanded the entire regiment "with coolness, excellent judgment, and consummate ability." After his death on June 9, said Wallace, the "body of the dead hero was brought to Pottsville and interred on Sunday afternoon, June 12, 1864, with Masonic ceremonies and military honors. The funeral was one of the largest ever witnessed in Pottsville--a tribute of love for the man. The last moments of Major Gilmour were attended by Chaplain W.H. Keith, who ministered to the departing soul with brotherly affection. After death he had the body embalmed and dressed in uniform. The flowers placed on the lamented Major's breast by the kind hand of the Minister of God, were yet fresh when the coffin reached Pottsville, and formed a band of sympathy between the unknown friend who had placed them there and the relatives and friends of the deceased."