Early last year--during those cold, cold late winter days of 2016--I received an email from a Mr. Thomas Golden who had read an article of mine published in February 2016 issue of Civil War Times. The article told of the discovery of a cache of documents, muster rolls, requisitions, and so on, once belonging to Captain William Winlack, the commanding officer of Company E, 48th Pennsylvania Infantry. The Winlack papers had quite literally been rescued from a dump heap; discovered inside an old wooden table-top desk during the demolition of a dilapidated building in Schuylkill County, Pennsylvania. I told of this remarkable discovery in that article, entitled Treasure in a Coal Patch Town. Mr. Golden read the article with much interest and reached out to me because he had himself just recently come into possession of a collection of Civil War letters. . .


. . . and not just any collection of Civil War letters but the letters of a soldier who just so happened to serve in Captain Winlack's Company E, 48th Pennsylvania.

Like I said. . .sometimes strange things happen. So strange it is difficult to attribute it simply and purely to coincidence.

I could hardly believe the email I was reading. Of the more than two million soldiers who served in Union blue, I thought, this gentleman just so happened to come into possession of letters written by one who served in Winlack's Company E, 48th PA. In my article on Winlack I stated my wonder about what else could possibly be out there...what other treasures that are tucked away in attics or in shoe boxes under beds. As it turned out, I did not have long to wait for an answer, for here were letters--over 100 of them--never before published that were discovered, said Mr. Golden, by an acquaintance who was remodeling a home in Donaldson, Schuylkill County, Pennsylvania.

The letters were written by Private Daniel Emmanuel Reedy, a twenty-year-old laborer from Donaldson who, in December 1861, volunteered his services. He was mustered into Company E and served for the next two-and-a-half years with the 48th Pennsylvania, campaigning in North Carolina, Virginia, Kentucky, and Tennessee. Reedy was captured in August 1862 just prior to the 2nd Battle of Bull Run and confined briefly at Libby Prison. Exchanged, he returned to the 48th in time to participate in the Battle of Fredericksburg. Reedy next traveled with the regiment out west, first to Lexington, Kentucky, and then the mountains of eastern Tennessee. Returning to Virginia prior to the commencement of the bloody Overland Campaign, Reedy survived the Wilderness, Spotsylvania, and North Anna, but fell mortally wounded--pierced by at least seven bullets--on June 3, 1864, at Cold Harbor.

Mr. Golden very kindly allowed me to transcribe Reedy's many letters, which, of course, allowed me the opportunity to discover more not only about this young man from Donaldson but also more about the 48th Pennsylvania Infantry itself. Included with Reedy's letters was his 1864 diary, which contained a number of images. Unfortunately, none of the images were identified. There was one image, however, of a soldier wearing the uniform of a private--the others were officers, both commissioned and non-commissioned. I could not say for sure, of course, but if any of the soldiers shown in the images was Reedy, then it was likely the soldier in the private's uniform.


The letters, the diary and the photographs, are incredible and their discovery yet another remarkable find--especially considering that my article on Winlack had just, literally, been published when Mr. Golden came into possession of these items, and considering further that Reedy just so happened to have served under Winlack's command! The letters are in great condition, clearly passed down with love and care until tucked away at some point, only to be later discovered during the renovation of that home in Donaldson. Amazingly and interestingly enough, all the envelopes were also kept and preserved, which is something one does not often see.

I wrote to Dana Shoaf, editor of Civil War Times, about this amazingly coincidental discovery and he asked me to do a follow up story, which appeared in the February 2017 issue. The article, entitled Repulsing the Rebs in Fine Style told of the discovery of these letters and of Reedy's service record, including his horrific death at Cold Harbor. Believing all the letters needed to be seen and published, however, I asked Mr. Golden just last week if I can post them on my blog. He very generously and very kindly agreed.

I am thus proud to say that the complete collection of Daniel Reedy's Civil War letters--over 100 in all, chronicling his experienced from December 1861 to May 1864--are now available as a Page on this blog. The link to the letters can be found under the blog's title banner on the home page or by clicking here.

I cannot thank Mr. Golden enough for allowing me to publish Reedy's letters, though he did very rightly request that they not be used for any commercial reason or for any publication without first getting his permission. 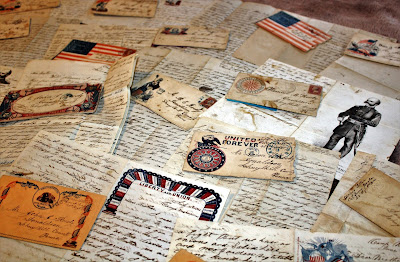 Posted by John David Hoptak at 7:34 AM

That's a fantastic story -- the letters themselves and how you connected with them. Having watched for 79th Pennsylvania items over the last ten or fifteen years, I'm really impressed by (and envious of) what you have assembled on the 48th Pennsylvania. Thanks for sharing the letters!