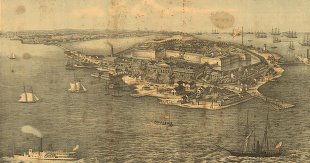 August-September, 1861: The 48th Pennsylvania Volunteer Infantry is recruited from throughout Schuylkill County and organized at Camp Curtin in Harrisburg.
September 24, 1861: After being mustered into service and presented with its flags, the 48th Pennsylvania left Harrisburg on the boxcars of the Northern Central Railroad and headed for Baltimore, Maryland. The journey of the 48th came to a halt for over ten hours when, within ten miles of Baltimore, the train stopped. . .there was a wreck on the tracks ahead. Some in the regiment speculated that it was the result of some “fiendish attempt” on the part of secessionists to derail the train. The long halt meant that regiment would not arrive in Baltimore until the morning of
September 25, 1861: After marching two miles through Baltimore, from the train depot to the wharf, the 48th embarked upon the steamship Georgia and set sail down the Chesapeake Bay, heading for Fortress Monroe, Virginia. “The trip down the Chesapeake Bay was accomplished safely and really enjoyed by all, notwithstanding the fact that the Georgia was a precarious old craft, likely to fall to pieces.” Lieutenant Bosbyshell of Company G later remembered that the “captain [of the steamship] wisely crept along close in to shore, not knowing what moment the timbers of the old hulk would separate. He was all anxiety, and his constant call admonishing to ‘trim ship’ kept the boys moving. The night moved slowly away, the somnolent regiment unmindful of the danger, although ever and anon through its weary hours the cry of ‘trim ship’ caused a shifting of position. Finally on the morning of
September 26, 1861: The 48th Pennsylvania arrived at Fortress Monroe. After passing around the high walls of the fort, using a long and narrow road and bridge that connected the fort with Hampton, the regiment arrived at Camp Hamilton. “Here,” recorded Sergeant Joseph Gould, “we settled down into a soldier’s life as naturally and contentedly as though we were old veterans.”

But the volunteer soldiers of the 48th were by no means veterans. Just a few days after being mustered into service, the regiment now found itself encamped on what was the enemy territory of Virginia, although the United States would control Fortress Monroe throughout the war. It was necessary to post guards outside of camp and some members of the regiment proved negligent of this very important duty. “One dark, blustery night,” General Joseph Mansfield, who was in command of Camp Hamilton, slipped past Private Jake Haines and entered the camp of the 48th undetected. Concerned for the safety and welfare of the troops, Mansfield notified the officer-of-the-guard that he was able to walk right past the guard and ordered the inattentive soldier be reprimanded in the morning. The following morning Colonel Nagle did, indeed, reprimand Private Haines but he did so “in the low squeaking voice which the Colonel sometimes adopted.” After the Colonel left, Private Haines, whom Oliver Bosbyshell described as “deaf as a post,” turned to one of his comrades and asked: “What did he say?”

The 48th Pennsylvania remained at Camp Hamilton, Fortress Monroe, until November 11, 1861, when they set sail for Hatteras Inlet, North Carolina. . .

I just found out my 2xgreat grandpa was in the 48th, co.F, and what you have done and are doing is so unbelievable and amazing, thank you.