Soldiers of the 48th: Private Henry Ege, Company I

I grew up in the small town of Orwigsburg, in southern Schuylkill County, Pennsylvania. Having an avid interest in all things Civil War from an early, early age, I would oftentimes walk among the tombstones of the town's three cemeteries, searching for the graves of Civil War soldiers, and especially those who served in the 48th Pennsylvania Volunteers. There are a number buried in my home town, but one that always particularly resonated with me was the grave of Henry Ege in Saint Paul's Lutheran Cemetery.

Looking into the records, I discovered the story of this young man whose life was cut far too short on the field of battle.

He was born on June 12, 1845, and named after his dad, Henry, Sr., a carpet weaver. His mother, Hannah, would give birth to at least four other children. When America's Civil War broke out in the spring of 1861, Henry J. Ege, was still only fifteen years of age, and was thus too young to enlist. In February 1864, however, and with the end of conflict still nowhere in sight, new recruits were needed and Ege, now eighteen, was quick to enlist. On February 23, the young laborer who stood 5’5 ½ with blue eyes and brown hair, was mustered into service as a private in Company I, 48th Pennsylvania Volunteer Infantry. The next month, Ege, along with the reenlisted veterans of the 48th as well as the other new recruits, boarded train cars in Pottsville, setting out for Annapolis, Maryland, where the Union Ninth Army Corps was then assembling.

On April 13, 1864, Henry Ege wrote the following letter to his mom and dad in Orwigsburg from the regiment's camp at Annapolis:

Dear Parents
I take my pen in hand to let you know that we are all well at present time and hoping that these few lines may find you enjoying the same state of happiness. I have not much news to tell you this time. I am out of money and would like if you would send me about five dollars as soon as you receive this letter. I would not have written for some money but we don’t know when we will get paid, a person feels lost if he has no money out here. General Burnside and Gen. U.S. Grant were here today, they are very fine looking Generals. The rest of the Orwigsburg boys are all well. I have no more news for this time. I had a letter from my school master C.H. Meredith. No more at present. Excuse bad writing for I had a bad pen.
Answer Soon
From Your Son
Henry J. Ege


Just over a month later, the Ege family in Orwigsburg would receive another letter, one likely written by one of Company I's commissioned officers, notifying them that their son had given his life on the field of battle. It was at a place called Spotsylvania Court House in Virginia. There, during horrific slaughter on May 12, 1864, the 48th had suffered especially heavy losses. Private Ege was shot through the head and killed instantly. The eager eighteen-year-old volunteer was in the army less than three months. 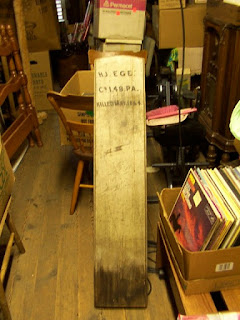 When the guns fell silent and the smoke cleared from the fields near Spotsylvania, members of the 48th Pennsylvania buried Ege on the battlefield along with at least twenty more of his comrades who had also been killed in action on that terrible day. To indicate the spot where Ege’s remains were buried, the soldiers of the 48th placed a marker, one that would replaced a year later with the one seen in the photograph to the right, placed there by Union soldiers in an effort to better mark the many battlefield burials. Later, the remains of these and other soldiers were laid to rest in the Fredericksburg National Cemetery.

Sometime between 1865 and 1867, Henry Ege, Sr., and likely a few others, traveled to far-away Spotsylvania to retrieve his son's remains, which were then brought home to Orwigsburg for burial in the Ege family plot in Saint Paul's Lutheran Cemetery, where they continue in their silent repose.