In December 1861, the citizens of Schuylkill County sent an American flag, measuring 20 feet long by 10 feet wide, to Company B, 48th Pennsylvania Volunteers, which was then encamped at Fort Clark, on Hatteras Island, North Carolina. The soldiers of Company B raised the flag over the fort on New Year's Day, 1862, and sent the following letter of acknowledgement and thanks:

Fort Clark, Hatteras Inlet, N.C.
January 1st, 1862
To The Citizens of Schuylkill County: Co. B, of the 48th Regt. P.V., being the recipients of a handsome flag, furnished them by your generosity, set apart New Year's day to the hoisting it upon Fort Clark, which pleasing ceremony was performed in the presence of Col. [James] Nagle, Major [Daniel] Nagle, and the Chaplain, and Co. B, amid a multitude of cheers and cries of "long may it wave." After the flag had been flung to the breeze, Col. Nagle and our worthy Captain [James Wren] made a few appropriate remarks, which were eagerly listened to, after which the Chaplain offered up a patriotic prayer. The committee on resolutions then withdrew, and adopted the following, on behalf of the Company:
Resolved, That we, officers and members of Co. B, do offer our sincere thanks to the citizens of Schuylkill County, for their extreme kindness, in bestowing upon us such a beautiful emblem of the free.
Resolved, That the members of Co. B, in their infinite gratitude to the kind donors, do hereby re-pledge their word of honor, that they shall ever be true to the noble flag of our country, which has so ruthlessly been trampled upon by rebellious feet, in defense of which they will shed their life's blood, if necessary.
Resolved, That the members of Co. B, shall make this flag the special object of their pride and care so long as it shall remain in their power.
Resolved, That a copy of these resolutions be sent to the Miner's Journal, for publication, through which medium our friends may be made acquainted with our doings, &c.
Serg't Jno. George Bassler,
Serg't Wm. H. Humes,
Committee on Resolutions, in behalf of Co. B, 48th Pa. Regt. 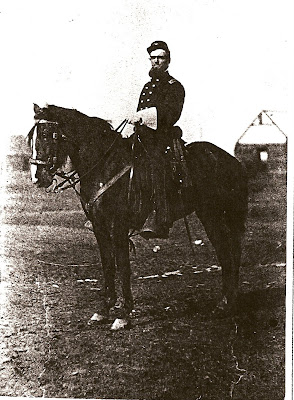