Soldiers of the 48th: Captain Ulysses A. Bast, Company B 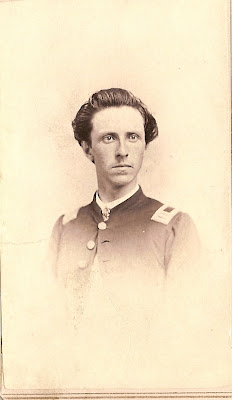 In April 1861, twenty-two-year-old Ulysses A. Bast, a machinist from Schuylkill Haven, marched off to war as the First Sergeant in the Scott Artillery, a militia company that served its three-month term of service in the 5th Pennsylvania Infantry. Discharged in July 1861, Bast helped recruit Company B, 48th Pennsylvania, and on September 19, was mustered into service as the company's first lieutenant. Two days later, the young lieutenant received "a beautiful sword, sash, and belt" presented by "the ladies of Schuylkill Haven, in consideration of [his] high personal character and unalloyed patriotism." Bast, who stood five feet, three inches, with a light complexion, dark hair, and brown eyes, served as the regimental quartermaster from March until September 1862, when he was promoted to the captaincy of Company B, to fill the vacancy created by the elevation of James Wren to major. While encamped in Pleasant Valley in October 1862, Wren "impressed on the minds of the men [of Company B] to obey thear New Captain as I believed Captain Bast to be a good and efficient officer."1
Captain Bast led Company B at the battle of Fredericksburg in December 1862, throughout 1863, during the Overland Campaign of 1864, and at Petersburg. On September 30, 1864, Captain Bast was honorably discharged, his three-year enlistment coming to an end.
{1. Captain James Wren's Civil War Diary: From New Bern to Fredericksburg, edited by John Michael Priest, New York: Berkley Books, 1991: Page 101}.
{Photograph from Hoptak Collection}
Posted by John David Hoptak at 9:15 PM