On this date, 142 years ago, the 48th Pennsylvania participated in its final battle. After a nine-month siege, beginning in late June 1864, General U.S. Grant ordered forward an all-out assault on the Confederate lines surrounding the city of Petersburg, Virginia. Throughout the pre-dawn hours of April 2, 1865, the soldiers of the 48th prepared themselves for the attack. At 4:00 a.m. an artillery barrage opened along the length of the Union line, as blue-clad skirmishers lurched their way forward. From their position behind Fort Sedgwick, dubbed "Fort Hell" by the troops, the 48th awaited the order to advance. Oliver Bosbyshell described the moments immediately before the attack:
"Only half-rationed, and with scalding coffee hastily swallowed, the Forty-Eighth moved toward the rear of 'Fort Hell,' through deep cuts made for the protection of wagons in going to and from the front--now filled with a slushy mud--and emerging near the Jerusalem Plank Road, crossed to the left rear of the Fort. The pioneers were cutting away the abatis in the narrow opening, [we] quickly formed line in front, and moved rapidly forward to the Union picket line."

Fort Sedgwick--or "Fort Hell"
Finally, sometime around 4:30 a.m., the order was given and with a rush, the 48th charged forward, directly toward the Confederate defenses known as Fort Mahone. The Confederate picket line was quickly overrun, and "eager to achieve greater results, away dashed the Forty-Eighth in the van of the brigade. . ." Leading the regiment was Colonel George Washington Gowen, who took command following the resignation of Henry Pleasants the previous Fall. Next to Gowen ran brigade commander John I. Curtin, and the 48th's regimental color-bearer, Samuel Beddall. The Confederate cannon by this point had begun "belching a very inferno of shot and shell into the ranks." Still, the regiment pushed forward. "On, on pushed the boys determined to capture the dire old tormentor who had troubled them so the winter long. The attack was most impetuous."
As the regiment neared the Confederate lines, Colonel Gowen and Colonel Curtin began removing the abatis when an artillery shell struck Gowen square in the face, killing him instantly. Beddall and the regimental flag was covered in Gowen's blood. Curtin, also wounded in the blast, leaned upon his sword and continued to urge the 48th forward, and "with the ferocity of madmen," the regiment "renewed the assualt, pushed through the obstructing abatis, over the moat, scaled the earthwork, securing a lodgement on the walls. . . .With one bound the men sprang forward, a hand-to-hand encounter ensued, which lasted but a moment, the rebels were overpowered, the fort was captured, and the enemy driven beyond it for a considerable distance." 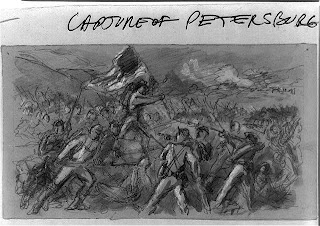 The Capture of Petersburg, by Alfred Waud

"Petersburg," concluded Bosbyshell, "so long invested, so hotly contested, and so stubbornly defended," had finally fallen into Union hands.

The final assault on Petersburg was the last battle of the Civil War in which the 48th Pennsylvania participated. The regiment spent the next week guarding railroad cars near Farmville, where they received word of Lee's surrender on April 9, 1865. The casualties during the attack were severe. In addition to losing Colonel Gowen, the regiment lost 11 men killed, another 55 wounded (of which 3 proved to be mortal), and 22 missing. Most of the missing would rejoin the regiment in the ensuing days. 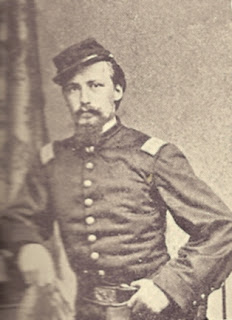 In describing the death of Gowen, Bosbyshell wrote: "So fell one greatly beloved--gloriously at the moment of victory, honored as few have been, mourned sadly by his men; indeed, all who knew his splendid worth and promising future were grieved." And on April 15, one week after guns had fallen silent in Virginia, the 48th Pennsylvania passed the following resolutions:

"Resolved,That although we bow with submission to the Divine will, which has taken him from amongst us, yet we cannot restrain an expression of the feeling of deep regret entertained by this Regiment at his death," and

"Resolved, That in the death of Colonel Gowen, this Regiment has sustained a loss which can never be repaired, inasmuch, that he possessed the rare qualities of the perfect gentleman united with those of the brave and efficient officer. Ever attentive to the innumerable wants of his command, courteous to those with whom he had intercourse, and displaying to all a kindness of heart seldom to be met with in the army."

I recently learned that my Great-Grandfather, John B. Smeltzer, was a private in the 205th PA. On April 2, 1865 he was wounded during the breakthrough at Petersburg, I believe during the assault on Battery 30. I hope to learn more once I get his records from NARA.

Hi Harry~
I hope all is well. The final assault on Petersburg, 4/2/1865, has been overlooked a little bit in the vast annals of Civil War historiography. Good luck finding info on your great-grandfather. Was the 205th with the 9th Corps, under Hartranft?

If my research has been correct I'm am related to Sgt. Isaac Fritz Co.B 48th PVI. Never knew he was listed as missing after the last engagement. I'm still in early stages of researching my ancestory though. :) Thanks for the great info!

I am glad this site is available for us! My GGG Grandfather James E. Sennett was with the Pa 48th Co. G. I have in my possession letters from him on and around this date depicting goings on at Ft. Sedgwick and the mines the 48th dug under the Rebel Fort. Amazing stuff!

I am glad websites like this one are available to us all. I have in my possession letter written by my GGG Grandfather Pa. 48th Co. G. to his mother with much mention about the goings on around Petersburg, Ft. Sedgwick, and the mines they dug under the Fort. Amazing stuff!

That's excellent, GatorZap. If you ever feel like sharing, I would love to see the contents of those letters, especially the digging of the mine!