Jacob W. Haas and the Hunt for John Wilkes Booth

The assassination of President Lincoln in April 1865 triggered the largest manhunt up to that point in American history. And it was not just confined to the District of Columbia, southern Maryland, and northern Virginia. In the immediate aftermath of the murder, and with the nation reeling, the search for Booth extended throughout the country. Pennsylvania was certainly no exception. And, as we will see with the case of Captain Jacob W. Haas, it was not uncommon for those who bore even a little resemblance to Booth to be mistaken for the assassin.
* * * * * * * * * *
On April 22, 1865, eight days after Lincoln's assassination and with the killer still at large, Schuylkill County's leading newspaper, The Miners' Journal, printed a report that John Wilkes Booth had been spotted in Reading, some forty miles or so southwest of Pottsville, the Schuylkill County seat, just a few days earlier. More immediate, Booth, reported the Journal, was able to escape from Reading on a north-bound train. . .meaning he was heading toward Schuylkill County! Pursuers traveled to the train station in Port Clinton to capture Booth, but there discovered that the man fitting Booth's description had fled to nearby Tamaqua. So a telegram was sent to the authorities in Tamaqua: Be on the lookout for a man resembling John Wilkes Booth, with black eyes, short black hair, and a short black mustache. He was wearing a black frock coat, a crape on his left arm, and, of all things, a Lincoln badge of mourning on his coat. The following day, Constable Chrisman, arrested and detained two men in Tamaqua. Had Booth been captured? That very same day, a man arrived in Pottsville from Philadelphia, registering his name at a local hotel as B.B. Cook. The hotel clerk believed this man was acting rather suspicious, so he summoned a police officer and the man was arrested. "His conduct," reported the Miners's Journal is certainly suspicious and he will be held until he establishes the fact that he is an innocent man." So,one week after the assassination of President Lincoln, at least three men were arrested in Schuylkill County for resembling John Wilkes Booth. When news arrived that Booth had been shot and killed in Virginia during the early morning hours of April 26, these men were released from their confinement.
* * * * * * * * * *
Throughout the country, Americans were relieved to learn that Booth had finally been tracked down. Perhaps none more so than Captain Jacob Washington Haas.

Haas was a native of Pottsville, Pennsylvania, and was among the first northern volunteer soldiers to reach Washington after the start of the Civil War, and had served throughout the war in the 96th Pennsylvania Infantry. He survived some of the war's deadliest battles including Gaines's Mill, Crampton's Gap (where the 96th suffered terrible loss), Antietam, Chancellorsville, Gettysburg, and Spotsylvania, and by the time of his discharge in October 1864 he had risen to the rank of Captain, commanding Company G.

Following his discharge from the army, Haas returned to Pottsville, but in early April, 1865, he, along with Colonel William Lessig, also of the 96th PA, traveled to western Pennsylvania hoping to strike it rich in the oil fields. Haas and Lessig were staying at a hotel in Lewisburg, when word of Lincoln's death spread throughout the country. Someone in town noticed Haas, and mistook him for Booth. A mob began forming around the hotel. Haas and Lessig, discovering that they were the targets of the mob's fury, barricaded themselves inside their room. It was a harrowing time for the two men. Fortunately for them, a native of Sunbury, perhaps a veteran of the 96th, was able to identify both Haas and Lessig with certainty.

A few days later, on April 22, 1865, as Haas and Lessig continued to make their way west, however, they were taken into custody by members of the 16th Pennsylvania Cavalry near Philipsburg. Word spread quickly throughout the town that Booth had been captured, and, once again, an angry mob formed intent on hanging Lincoln's killer and his accomplice. Lessig was able to convince 2nd Lt. G.P. McDougall, commanding the 16th PA Cavalry, that Haas was not Booth, and that day, McDougall released them. The lieutenant provided them with a pass, stating: "I have this day arrested W.H. Lessig and J.W. Haws, and examined them and find they are not as suspected Booth, the assassin of President Lincoln."

As Haas and Lessig continued on their way, they felt safer now that they carried along with them the pass from Lieutenant McDougall. But when they reached the town of Clarion on April 26, 1865, they found out how mistaken they were. For a third time, Haas was taken into custody. A mob formed. They dismissed the pass as bogus and procured a rope for hanging. Haas claimed he could prove he was not Booth. Take him to the bank at Franklin, he begged. His request was granted and Haas was taken under escort to the bank where he had previously deposited money. The mob was satisfied and let Haas go. Imagine Haas's relief, then, when a few hours later word spread throughout the nation that the real assassin, John Wilkes Booth, was tracked down and killed. 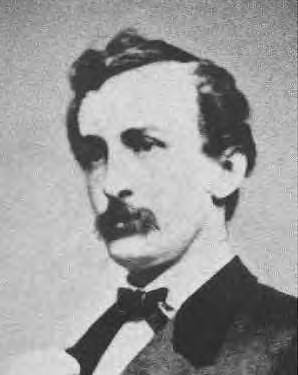 John Wilkes Booth
His assassination of Lincoln nearly led to the death of Captain Jacob W. Haas, a Schuylkill County native and veteran of the 96th Pennsylvania Infantry.
Posted by John David Hoptak at 12:44 PM

Which leads me to wonder about the total number of innocents all over the multi-state region who were wrongfully arrested and held during that frenzied period.

Somebody call me a lawyer!

Hey John,
Great stuff ,really enjoyed reading it.let me know when you want to go to Greenmount,we'll find out if ole JWB is there or not.....see ya soon

Mr Haas was from Shamokin, Sunbury area of Pennsylvania and is buried high up on the hill cemetary in Shamokin along with numerous relatives.In fact there is a street named Haas and there had been a town named Haas(no longer called that) right next to the town of Rough and Ready. He was my husband's great grandfather and my father-in-law did a marvelous job on their ancestry.

Jacob Haas is my ancestor! I have the original news clip from this!

I have an original Civil War era carte de visite of CPT Haas (same image as in this article). It was photographed by A.M. Allen of Pottsville.

Haas was my 5th generation grandfather

That’s my ancestor! He’s buried in what used to be the town of Haas, PA, which was next to the town of Rough ‘n Ready. My grandfather did a ton of research on our history, this is one of the.many interesting pieces of history in our family!