Last week I posted the story of Captain Jacob W. Haas who, in the days following the assassination of President Lincoln and while the hunt for his killer was still ongoing, was mistaken for John Wilkes Booth on several occasions. I'm sticking with the theme of Lincoln's Assassination this week with, of course, another connection to Schuylkill County.
* * * * * * * * * *
On April 18, 1861, three days after President Lincoln issued his first call-to-arms, five companies of Northern volunteers, all from Pennsylvania, arrived in Washington. The 475 or so men comprising the ranks of these five companies were the first volunteers to reach the nation's capital following the commencement of sectional hostilities and would go down in history as the "First Defenders."
Two of the five companies, the National Light Infantry and Washington Artillerists, hailed from Pottsville, the seat of Schuylkill County. Taking up quarters in the halls and chambers of the U.S. Capitol Building, the volunteers were welcomed in Washington by a host of high-ranking government officials including Speaker of the House Galusha Grow, US Secretary of War Simon Cameron, and US Secretary of State William H. Seward. April 19, the day after the arrival of the First Defenders, President Abraham Lincoln made his way to the Capitol Building and thanked the Pennsylvanians for their service and their timely arrival in the nation's capital. As he made his way to the Washington Artillerists, someone called out for Lincoln to make a speech. "Officers and soldiers of the Washington Artillery," replied Lincoln, "I did not come here to make a speech. The time for speech making has gone by, the time for action is at hand. I came here to give you a warm welcome to the city of Washington, and to shake hands with every officer and soldier in your company providing you grant me that privilege."
No one, of course, denied Lincoln the privilege.
Shaking hands with President Lincoln that morning was John C. Weaver, a 27 year old private in the Washington Artillerists. While most of the men of the Pottsville company would never get so close to the president again, Weaver did. . .but under much more tragic circumstances.
Four years after marching into Washington with the First Defenders in April 1861, Weaver was once again in the city. He had survived the war and, on April 14, 1865, was in Ford' Theatre, catching a showing of the comedy Our American Cousin. The show began but was interrupted a short time later by the arrival of President and Mrs. Lincoln. The Lincoln's received a tremendous applause from the audience, who then settled back down to watch the remaining acts. But the show was once again interrupted when John Wilkes Booth fired his Derringer into the back of Lincoln's head, leaped onto the stage, and made his very theatrical exit. Pandemonium broke loose in Ford's Theatre. Dr. Charles Leale, also in attendance, made his way to the dying president and decided that Lincoln must be removed from the crowd and from the theater. Soon, six soldiers reached the president's box: William Sample, Jabe Griffiths, John Corey, Jacob Soles, another soldier whose identity remains unknown, and. . . John C. Weaver.
Weaver and the five other soldiers carried Lincoln across the street to the Peterson House, located at 453 Tenth Street. After helping to lay Lincoln's body on a bed in a small back room of the house, Weaver remained near the Peterson home all night.
Abraham Lincoln died at 7:22 on the morning of April 15, 1865. His lifeless body was laid in a crudely built pine coffin, which was then taken to the White House some time later. Helping to carry the coffin from the room in which he died to an awaiting carriage in front of the Peterson Home, and escorting Lincoln's body back to the Executive Mansion was, of course, John C. Weaver.
Private John Weaver is known in some circles thus as the First and Last Volunteer for President Abraham Lincoln.
Weaver died on November 12, 1920, at the age of 86. Obituaries appearing the Philadelphia Evening Bulletin, the Philadelphia Public Ledger, and the New York Tribune all maintained that Weaver was the last survivor of the six soldiers who carried President Lincoln from Ford's Theatre to the Peterson House on that terrible night in April 1865. 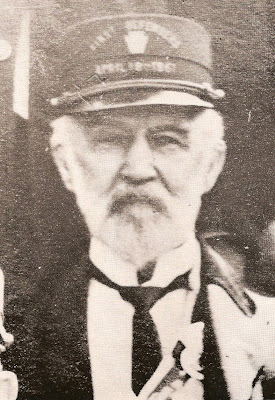