"The Last Sad Honors:" The Funeral of General James Nagle

James Nagle was a remarkable man. He organized a milita company at the age of 18, fought in the Mexican-American War as a captain of infantry, and, during the Civil War, raised, organized, and commanded no less than four regiments of Pennsylvania volunteers. A brigadier general, he also led a brigade at the battles of 2nd Bull Run, South Mountain, Antietam, and Fredericksburg. Had it not been for the heart disease that forced his resignation from the army in May 1863, he no doubt would have risen to division command, and, perhaps to major general.

He never attended West Point, or received any type of formal military training, but in camp and on the battlefield, he was, nontheless, a more than competent officer.

But the military was not his whole story. He was also a faithful husband and the devoted father of seven. When not in the army, he worked for his housepainting and wallpaper-hanging business, and served a term as sheriff of Schuylkill County. He was also on the Pottsville School Board, and was a member and then president of the borough council.

Despite all of this, Nagle remains a forgotten figure. For all the tens of thousands of books published on the American Civil War, it seems strange that there are those who still dwell in the vast halls of historical obscurity. And James Nagle, regrettably, is one of them.

During his short life, he was able to accomplish much, and in Schuylkill County he was an esteemed and respected figure. Testament to the high regard in which he was held was his funeral, held on Saturday, August 25, 1866. He died the previous Wednesday, August 22, at 4:00 a.m., in his Pottsville home, surrounded by his family. He was only 44 years old when he died.

The Miners' Journal, Schuylkill County's leading newspaper, described at length the funeral of Brigadier General James Nagle. It is reprinted below:

General James Nagle.-Sincere sorrow pervaded this community on Wednesday morning last, when the fact of Gen. Nagle’s death became known. The sad event was not unexpected, for he had suffered for years from disease of the heart and liver, and during the past few weeks it was evident to his friends that he was succumbing to the attacks of adversaries too powerful for medicine to combat successfully. He died on Wednesday morning at 4 o’clock at his residence in this Borough. A brave soldier of two wars; a good citizen; an estimable man, has passed away. While the memory of his worth will remain green in the memories of this community in which so many years of his useful life were spent, his name will be inscribed with honor on the pages of his country’s history.

The Funeral of Gen. James Nagle. The remains of Gen. Nagle were interred in the Presbyterian Cemetery on Saturday afternoon last with military honors.
During the morning the Ringgold Band of Reading, which had volunteered to play on the occasion, the Ashland Veterans, Capt. McLaughlin, and the Cumbola Nagle Guards reached the borough to attend the funeral. At noon Capt. Binder of Philadelphia, a companion-in-arms of Gen. Nagle in the Mexican War, having been in the same Regiment, Gen. Albright of Carbon County, and Major Bertolette of Reading, also arrived to assist in playing the last sad honors to the remains of the dead soldier.
The body was viewed by hundreds before the hour of moving from the late residence of the deceased General. The corpse was attired in citizens’ dress, and rested in a coffin furnished by Mr. John Kalbach, Centre Street opposite the Union Hotel. It was made of walnut covered with black cloth, and the ornamentation was faultless, reflecting great credit on the taste of the maker. A silver plate on the lid bore the General’s name and age. The entire workmanship was the subject of much and just commendation. When the coffin was placed in the hearse it was covered with a silk national flag with a black rosette in each corner. On the top rested the sword which was presented to Gen. Nagle by the citizens of Schuylkill County, after his return from Mexico.
About 3 o’clock the cortege moved from the house in the following order, left in front: 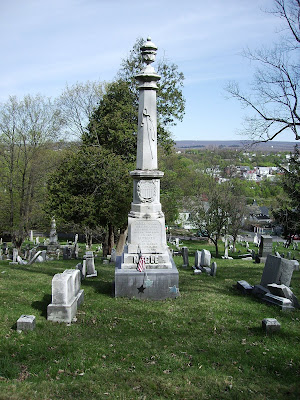 Posted by John David Hoptak at 8:07 AM

All this information is amazing. This is my great great great grandfather. Im glad to see some one made a page about him. Thank you

I am a great Grandniece of the General and have 'visited' him several times in Antietam. The latest was this past summer [2015] when my family and I stopped by on our trip to Pennsylvania. When I was a child, I visited a few times with my parents. I was also able to be at the Re-dedication Ceremony for his sword following its replacement after being vandalized.

And a proud descendant of the general, and it was wonderful to read this account of his life and funeral, I will share it with my son. Thank you!