The 48th Pennsylvania at The Wilderness & Spotsylvania: Part 4: A Premonition of Death. . .

Sergeant William J. Wells, of Company F, wrote of the following incident that occurred before the regiment went into action at Spotsylvania: 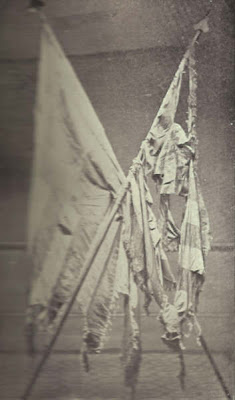 “In this fight I was one of the Color Guard of the regiment. Comrade John Morrisey, of my company, came to me just before our charge across the swamp and bade me ‘good-bye.’ I chided him, and tried to cheer him; then suggested that he remain out of the fight, which we all felt to be at hand. He indignantly refused, and said: 'I have never yet shirked my duty, and will not do it now. After I’m dead, write to my sister, Mary, and tell her I died facing the enemy.' Just then the bugle sounded the advance. He ran to his company, and, immediately fell, shot through the forehead. After returning to our position, subsequent to the charge, we dug a hole with the bayonet; wrapped him in his blanket and buried him. Then, upon a piece of cracker-box, we wrote, with a charred stick, his name, company and regiment. While lying in the hospital at Chestnut Hill, Pa., his sister, finding my name among the new arrivals, visited me, and I delivered his dying message to her. She was a poor servant girl in the City of Philadelphia, but I shall never forget her distress.”
Posted by John David Hoptak at 7:32 PM