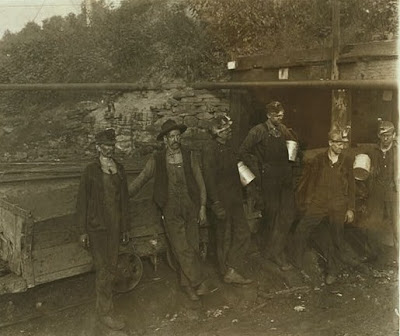 Is there any other Civil War regiment--North or South--so closely associated with an occupation than the 48th Pennsylvania Infantry?
Whenever the 48th is brought up in discussion or mentioned in books, invariably comes the phrase: "that regiment of coal miners." The regiment was recruited almost exclusively out of Schuylkill County, in east-central Pennsylvania. During the three decades preceding the Civil War, Schuylkill alone provided one-half the entire nation's total tonnage of anthracite coal so it only makes sense that a good number of soldiers in the 48th eked out a living underground. However, the 48th was not the only unit recruited out of Schuylkill County. During the four-year conflict, thousands of county men donned the Union blue, with only 20-25% of these serving in the 48th. There were other companies and other regiments as well, such as 96th Pennsylvania and the 129th and the 7th PA Cavalry and so on. The ranks of these units also contained a good number of coal miners, but I have yet to read a description of these regiments as "that regiment of coal miners." But then again, these regiments did not tunnel under the Confederate lines at Petersburg. That was the 48th PA, and the 48th PA alone. Hence the description. . . 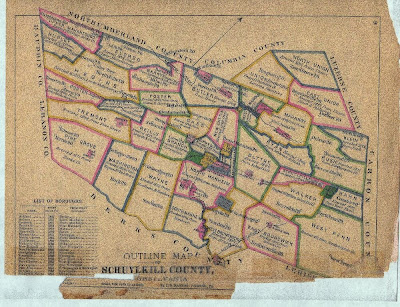 Schuylkill County Map
I was organizing some of my files yesterday and came across a breakdown of the soldiers' occupations, and thought I'd share.
So, the question is this: Exactly how many soldiers in the 48th were actually coal miners?
After examining the muster & descriptive rolls, I counted. . .are you ready?. . .a total of 244 soldiers whose occupation was listed as miner. Yep, just 244. Out of the 1,860 men who served in the regiment during the war, this number represented just 13% of the regiment. "Laborers" constituted the highest percentage of any one occupation in the regiment at 35%, while "Students" was next at 14%.
This low number--and low percentage--of miners is surprising at first glance, but it must be remembered that a good number of those listed as "Laborers" no doubt labored at coal mines. . not underground, but above it, in a host of various coal-related positions. There was also a good number of Mine Superintendents and especially Mining Engineers in the ranks. . .take Colonels Henry Pleasants (the mastermind of the Petersburg Mine) and George W. Gowen, for instance. So, in the end, it is impossible to state with certainty how many soldiers of the regiment were actually employed at the mines, but it is still interesting to note that only 244, 13%, were miners.
There were a number of soldiers with rather unusual vocations in the regiment as well. James Nagle, the man who organized the regiment, for example, was a wallpaper hanger and house painter, while Private John Hoover was an umbrella maker. There was also a jeweller, several tobacconists, watchmakers, a horse jockey, and one fellow who listed his job as "Ragman." Surprisingly, in a regiment in which five of the ten companies were recruited out of Pottsville--the home of Yuengling beer since 1829--I found only one brewer and one bartender.
Posted by John David Hoptak at 6:18 AM

Hey John did you every read Grace Palladino's "Another Civil War"? It's about what went on in the coalfields if Pennsylvania during the war. Not a great book but you might find it interesting.

Hey John~
I most certainly have. . .I used the dissertation of Palladino's work quite extensively while I was working on my master's thesis.

On another note. . .has anyone asked you yet where Buster Kilrain is buried?

Not yet, but only because I haven't been out at Little Round Top.